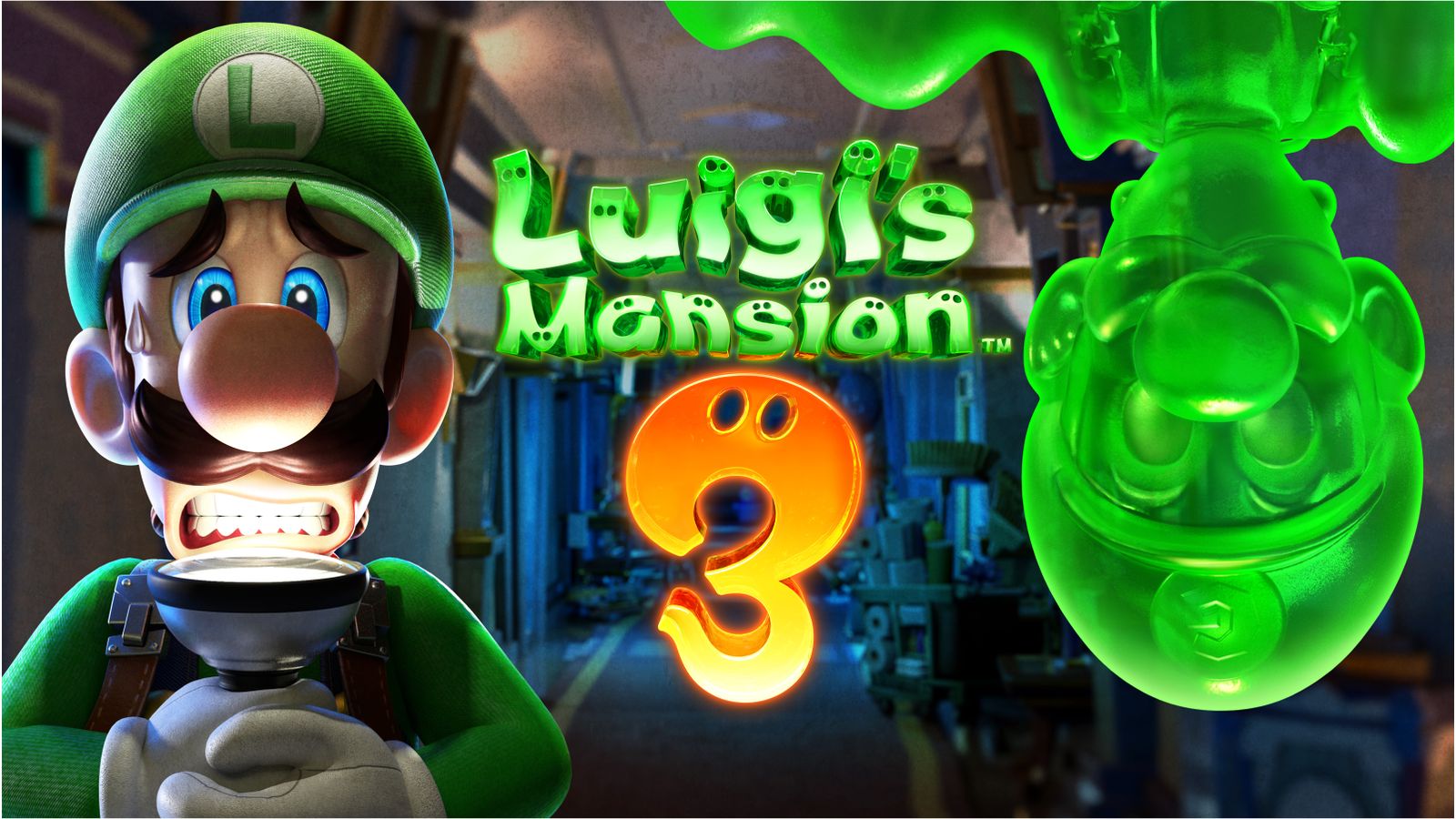 Yesterday, two interesting new trailers were posted on the Japanese official site for Luigi’s Mansion 3. These were an overview trailer and commercial, and both of them showed off more than a couple of interesting aspects of the game.

Such as new characters, boss ghosts and floors! There’s a ton to take in here, especially when you add all the smaller details behind the scenes.

So check out the trailers here:

Then keep reading for our full length analysis covering every little detail you’ll see in each of the videos! Let’s do this!

Starting with the game’s intro. No, no the main cutscene. We’ve seen that part in the previous trailer, and while it looks amazing, there’s nothing more to see here.

However, the trailer does appear to show what happens AFTER said scene. Namely… you get to explore the hotel a bit as Luigi before he gets the Poltergust at all! Yep, that scene where you escape King Boo isn’t the only playable part of the intro, the entire lead up to said scene appears to be playable as well.

This leaves us with a few interesting questions right away. Firstly… how linear is this part of the game?

It’s obvious you won’t be able to reach another floor in this state, and it’s likely most of the fifth floor is off limits too.

But there are a lot of rooms in your path on the fifth floor none the less, and many objects to interact with too. So it could be interesting to see if you can do things like pick up cash, find jewels or encounter a few secrets before even meeting King Boo or Professor E Gadd.

Secondly, can you get a game over before the game even begins? Presumably getting caught by King Boo in the escape section gets you a game over, so it makes us wonder if you can speed run this bit and end up getting the world’s quickest game over by just running straight into the main villain like a drunken idiot. Could be a fun category on speedrun.com!

Either way, after exploring the hotel a bit, Luigi bumps into hotel owner Hallen Gravely, who stands in the entrance of the floor’s lift and teleports the captured Mario/Peach/Toads out of his way. This is King Boo’s cue to enter, at which point he chases Luigi to the laundry chute, Luigi falls in, he encounters E Gadd in the basement and the game begins proper at that point onwards.

From there, we get a ton of footage showing loads more floors and locations never glimpsed in previous Directs and trailers. Like this gym area with a huge wall sized mirror akin to the one in the original game’s Mirror Room:

This one is later glimpsed quite a few times in the trailer, with other enemies being fought in the same room and a pool with a boss ghost (more on him later) who you presumably fight for the elevator button.

Another new floor we see here is a museum area, which seems to be filled with skeletons of prehistoric creatures. No idea why the hotel would have a natural history museum in it, but hey, it makes for an interesting setting, and it works to set up a creative enemy/boss encounter we’ll cover later in the video.

And then there’s the magic floor. Yeah, stage magic has an entire floor dedicated to it in this game, complete with fancy top hats, playing cards of all shapes and sizes and rabbits just waiting to be pulled out of hats. Interestingly, there seems to be a focus on traps here, since at one point a precariously placed floating hat falls on Luigi in a similar way to the trap vases in the ScareScraper of the previous title.

Other floors get some new footage here too. Like the basement area, which seems to be flooded with water in places and home to some rather nasty looking ghosts:

Or the theatre area, which now has footage showing the actual stage area and what appears to be a refreshment stand:

It’s quite the mix of locations, and shows that whatever it’s flaws in the customer service department, the Last Resort is certainly an… interesting place to stay.

And as the trailer also shows, its guests are certainly an intriguing bunch too. Because as mentioned in the intro, the new trailers showcase a fair few of the character ghosts featured in the game.

Some of these, like King MacFright and Dr Potter have already been seen in past videos. They’re great opponents, but we won’t delve too much into their patterns due to how everyone and their dog has seen the battles by now.

Meanwhile the shark pirate is again only featured for the shortest possible period of time, with no new footage to speak of. Bit of a shame there, would have been great to see a bit more about how the ‘ship possession’ gimmick works in this fight, or how Luigi is meant to attack back.

However, there are some clips showing more of the battles we’ve barely witnessed in previous trailers. For instance, we now know that the Disc Jockey boss first sends out her ghostly minions to face Luigi in a dance off, then tries to take on Luigi himself by chucking records at him while teleporting around like a Kirby end-boss.

Meanwhile our chef friend from the last trailer attacks via spinning, with him trying to clobber Luigi with a frying pan as he charges across the floor. Guess the old ‘just smack him over the head with the frying pan’ idea was a bit too normal for this guy.

Moving on from there, we see the bellhop ghost again, and security guard ghost, both of which were only very briefly seen in game before.

The former is now trying to clobber Luigi with suitcases:

While the latter is (as expected) attempting to melt Gooigi by shooting water at him from that water pistol he carries around. Presumably the gimmick here is that only Gooigi can activate something in the area that can hurt the boss, and that puts him in range for the latter’s water shooting attacks.

Still, enough of the old guys for now, onto the new ones. Which these two trailers showcase exactly four of.

With the first of ‘em being this swimmer/bodybuilder fought in the gym area. He’s battled in the swimming pool, and if Polterpup’s ‘hint’ in the background is any indication, is likely weakened by either draining the water or changing its temperature enough to stun the boss.

Which makes us think… why is Polterpup here again?

Well, there are two possibilities really. Number 1 is that said ghost is fought really early in the game, and it’s early enough that Polterpup is still teaching you new moves and ways to interact with the environment. That’s one possibility here, albeit one hurt a little by the bellhop and chef looking like even easier boss battles.

Possibility 2 on the other hand is that this is how the hint system works throughout most of the game. You ask for help, and Polterpup appears in the background to give you hints on how to solve puzzles, weaken bosses, etc. This is our theory on the matter, and one backed up by earlier comments in Nintendo livestreams.

That brings us to boss 3, and the Ione we presumably fight in Tomb Suites. It’s a Cleopatra type pharaoh character who we briefly see in the character ghost intro screen, as well as in this short clip from the TV commercial:

Yeah, there’s not much to say here. Presumably she appears throughout the area based on the background footage and her actions work like a mummy’s curse, but that’s just a guess based on the five seconds or so we see here.

Still, it’s another one for the boss list, and another example of an interesting ghost design in a game already filled to the brim with them.

Onto the last newcomer. And well, if you thought the Cleopatra type ghost didn’t get much airtime in these videos, well this guy gets real screwed by the Nintendo marketing department.

Because unlike every other boss on the list, he’s not shown in any form of battle at all.

Instead, he’s very briefly glimpsed during the character boss intro screen, in the top centre between Morty and King MacFright:

As you can (just about) see, he seems to be a scientist with white unkempt hair, and could be found in either a library or museum themed area based on the very little we see of the background behind him.

So that brings the known boss count up to 13. In likeliest order of appearance:

Given we’ve got 17 floors in total, that seems like a decent chunk of the enemy roster right there. Speaking of which, that also brings the floor list up to the following (again, based on available data and estimates):

Which would already equal 17 floors. However, given the UFO like structure on between the Spectral Catch and the Dance Hall isn’t accounted for and a bunch of other numbers are missing, it’s probable some things will be a bit off.

Back to the museum now though, since the trailer ends the story section with a very intriguing scene set there. This one:

Why is this interesting? Well, a few reasons really. Most notably:

It confirms we’ll have to save characters from paintings in the same way as Luigi’s Mansion Dark Moon. So it likely means a few of the bosses will also guard Mario, Peach, etc like this too.
There’s a bloody skeleton T-Rex trying to eat Luigi in a scene that’s very reminiscent of the Night at the Museum movies.
Said T-Rex seems to either be the boss of the floor it’s on or possessed by the boss of the floor, since its rib cage contains a strange pink glow almost like an orb of some kind.

So it provides quite a few hints at what’s to come, in addition to topping off two already packed videos.

And that ends the story stuff. But we’re not entirely done just yet.

Because the overview trailer also showcases a bit of the ScareScraper and Scream Park too. Unfortunately there’s not that much to note here, but there are a few tidbits here and there none the less.

Such as this ghost seen capturing a Toad later on. It seems to be this game’s version of a Creeper from Dark Moon, and utilises portals to move around rather than just staying stationary in one location:

Or just the sheer variety of rooms found here in general. Indeed, where Dark Moon used the same four or five types of rooms almost mercilessly, the third game includes a hell of a lot more variation in decor for its ScareScraper mode.

This is probably because the Switch doesn’t have download play, and Next Level Games don’t have to worry about cramming everything into the paltry amount of space provided by it.

So yeah, that’s the new trailers for you, and everything new that can be found there. Hopefully our analysis showed off some details you missed when watching them yourself, and shone some more light on even more elements of this amazing looking game.

Are you impressed with everything you’ve seen in Luigi’s Mansion 3 so far? Are there any interesting details we missed in the article?

Tell us your thoughts and discoveries in the comments below, or on social media today!