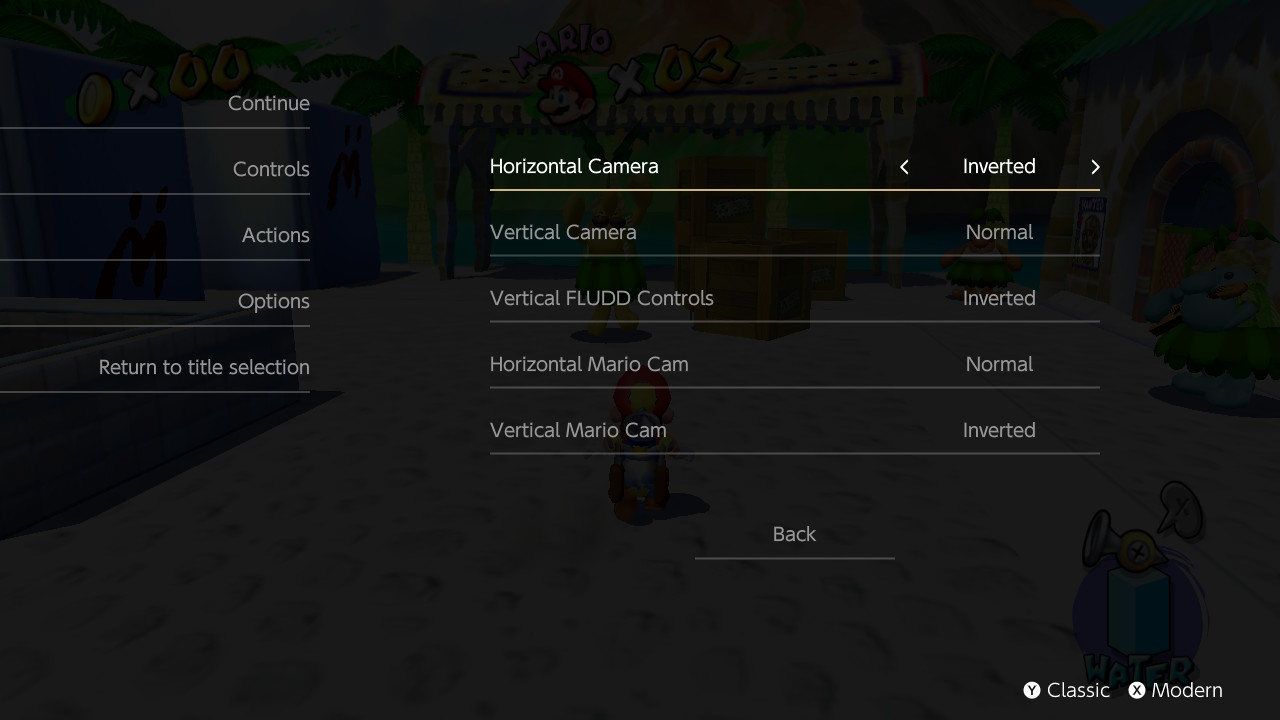 As everyone knows, Super Mario 3D All-Stars was not exactly… the most thorough collection as far as extras and features was concerned. It didn’t remaster or upscale the games, with a few minor exceptions. It didn’t add any new content or extra mini games, like the Kirby Collections did back on DS and Wii.

And it certainly didn’t include every 3D Mario game in the series, with things like Super Mario 64 DS, Super Mario Galaxy 2 and Super Mario 3D Land being no one to be seen.

Yet while these big missing features were what got everyone’s attention, it wasn’t really that surprising they were missing to begin with. After all, remaking the games in a new engine or redoing graphics would take a significant amount of time, and extra games were something that Nintendo is usually hesitant about including anyway.

What was surprising was the lack of camera options. Most notably, the lack of options to invert the camera controls for the various games, or to change FLUDD’s aiming system in a similar way to better match the original version of Super Mario Sunshine.

This really threw off many long time fans, especially for games like Super Mario Sunshine.

However, it seems the lack of camera options won’t be an issue for long. No, as Nintendo has just announced on Twitter, inverted camera controls will be patched into Super Mario 3D All-Stars as an option on November 17th. Here’s a tweet from Nintendo of Europe confirming it:

A free software update is coming to #SuperMario3DAllStars on 17/11 that adds a new inverted camera control setting for all three games. pic.twitter.com/x3IKq8xreA

Interestingly, this also seems like it applies to the FLUDD controls in Super Mario Sunshine as well. So if you’re one of those people who played the original game but just can’t get used to the 3D All-Stars port to the uninverted controls, you can now set it back to how it was on the GameCube. Pretty handy really, especially for longtime fans.

Also handy is the easy toggle between ‘modern’ and ‘classic’ camera controls. Presumably these switch the controls to exactly match the ones from the original games, so (like with Sunshine) those used to the N64 and Wii versions of Mario 64 and Galaxy can easily set up the modern ports to work like those ones.

So while we’re a bit confused at the release date (November 17th seems a bit far off for something like this), it’s nice to see more options being added nonetheless. Wonder if any other quality of life changes will be added the same way? Or whether entire new games could end up patched in too, like Super Mario Galaxy 2 or Super Mario 64 DS?

If so, 3D All-Stars could become a lot better in future, and possibly even become the collection fans always hoped it’d be.

Still, what do you think about this? Are you excited to see new camera options added into 3D All-Stars? What other things do you think Nintendo will add into the game in future?