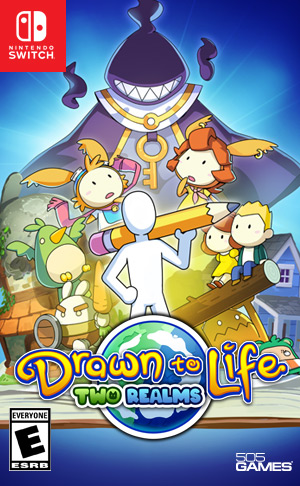 When you think about it for a minute, ratings boards and trademark registrations have been behind a surprising number of video game leaks. There was Crash Bandicoot 4: It’s About Time, which was first mentioned by the Taiwanese rating board. There were Void Bastards and Metro Redux, which were leaked by PEGI back in January.

Plus who knows how many Pokemon leaks caused by trademark registrations. That gave away every legendary and mythical from the Sun and Moon era after all.

And this pattern is apparently continuing here as well. Why? Because as the title suggests, the Taiwanese rating board has now leaked a new Drawn to Life game for Nintendo Switch. These games were originally part of a duology on DS, and featured the main character (created by you) saving creatures called the Raposa from the evil villain Wilfre, in a plot that was both surprisingly dark and surprisingly heartwarming at the same time.

They were beloved games by those that played them, and ones that developed quite the cult following in the years since their release.

But they didn’t get much beyond that. 5th Cell (their developers) moved onto Scribblenauts, whereas the series itself only ever got a few rereleases on mobile later on, with the idea of another console game being a seeming non possibility.

So to see Two Realms get revealed like this is a pleasant surprise.

Yet it’s also one that leaves a lot of questions open. Most notably, whether it’s a new game, port or collection.

On the one hand, the title seems like something you’d use for a new name, and the box art design seems to hint at that too.

But it’s not confirmed, and everything else is left super vague too.

Drawn to Life is a game where the player must draw their own character, weapons and accessories, platforms, and objects.

The official website URL that may been registered earlier this year?

Even the aforementioned title and box art could be taken in any number of ways here.

So it’s vague all round. It could be new, it could not. There’s no way of knowing here.

Regardless, it’s a nice thing to see nonetheless. The series has definitely deserved a new game for a while now, and the concept behind it (draw and create your own main character and objects) is a creative one that could certainly work well on the Switch.

Hence we’re excited to see how things turn out.

Tell us your thoughts in the comments below or on our Discord server today!