The game must be the biggest industry fiasco of 2020 at this point. It’s been accused of using Nintendo Switch consoles to mine bitcoin, made headlines for dubious claims about the blockchain and its use for ‘futuristic DRM’ and been randomly pulled from sale worldwide, before suddenly ending up for sale again via the official website. 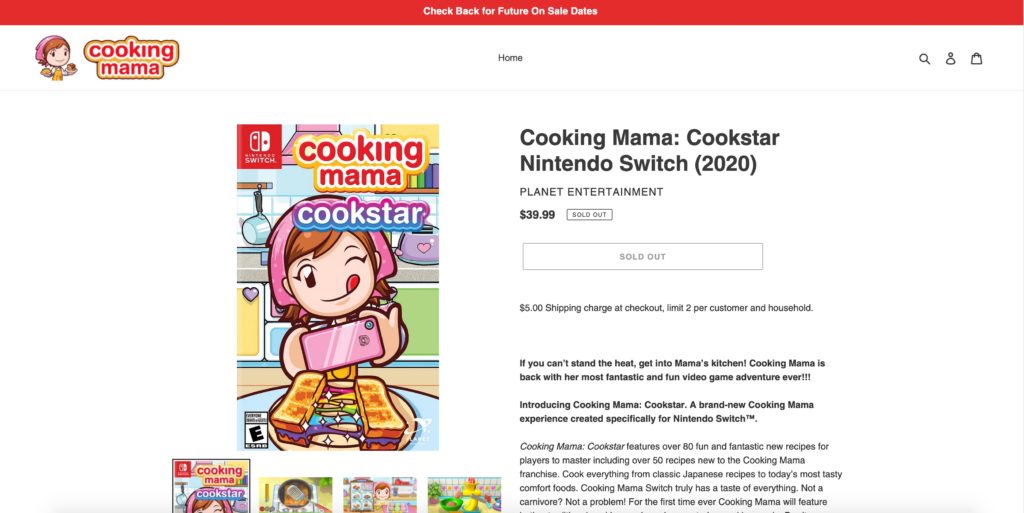 And it seems like the drama isn’t ending anytime soon. No, as it turns out, the IP owner and publisher are now stuck in a potential legal battle with one another too, with the former (Office Create) saying the latter (Planet Entertainment) released the game without their permission.

Here’s the former’s statement about what happened:

We would like to thank our fans and customers for their support over the years for the Cooking Mama franchise. As many of you know, Planet Entertainment LLC (Headquarters: Connecticut, USA; “Planet”) recently released “Cooking Mama: Cookstar” for sale in the U.S., Europe and Australia. This was an unauthorized release in breach of Planet’s contract with Office Create.

In August 2018, Office Create licensed Planet to develop the Cooking Mama: Cookstar game for Nintendo Switch™. Unfortunately, the quality of the game builds failed to meet the standards that our customers expect and deserve. Office Create rejected a wide range of deficiencies affecting the overall feel, quality and content of the game. Yet, despite being contractually obligated to correct the identified deficiencies and resubmit the corrected game for Office Create’s approval, Planet proceeded to release Cooking Mama: Cookstar without addressing all of the rejections and without Office Create’s approval.

On March 30, 2020 Office Create notified Planet of its immediate termination of the license due to Planet’s intentional material breach of the license contract. Despite such notice, Planet continues to advertise and sell the unauthorized version of Cooking Mama: Cookstar on its website in willful violation of Office Create’s rights. To date, Planet has not confirmed the status of the unauthorized PS4™ version.

Office Create is evaluating all legal action against Planet to protect our customers, intellectual property rights and the Cooking Mama series. In the meantime, we thank our customers and loyal Cooking Mama fans for their continued support and sincerely regret any confusion and disappointment that has been caused by Planet’s conduct.

As well as Planet Entertainment’s response:

Unfortunately, creative differences arose as Cooking Mama Cookstar was near completion that were outside the scope of our agreement and the game design approved by Office Create.

By contact, Planet is fully within its rights to publish Cooking Mama Cookstar. There is no active litigation or ruling that prevents Planet from publishing the game.

Cooking Mama fans have been very enthusiastic about Cooking Mama Cookstar, including the many new features including Vegetarian and, Unicorn food, Potluck Party plus more.

We appreciate the overwhelming response and support from Cooking Mama Cookstar fans.

Office Create has our total respect. We thank them for their wisdom and wish them well.

Whereas Planet Entertainment says they fulfilled their contract and got the game designed to the standards agreed on before, and are well within their rights to sell the game.

However, that’s only part of the picture. A major part sure, but part none the less.

No, in addition to the above, some of the controversy comes from Planet Entertainment promising to release a PlayStation 4 port of the game in future. Office Create says they haven’t licensed one of those, so they’re considering the idea of going after Planet Entertainment on those grounds too.

Either way, the two companies disagree and they’re on the verge of fighting it out in court.

Which in turn basically spells doom for this game. Regardless of whether it gets to court (or who wins the court case), no one’s going to want to touch this game with a ten foot bargepole.

Consumers aren’t. They’ve heard the (admittedly false) rumours about the game mining bitcoin in the background or overheating their Switch consolels, and read the poor reviews for the title. So they’re likely not interested now.

Caption: This video by SomeOrdinaryGamers is worth watching for info on why the rumours are wrong

Office Create probably isn’t either. Even if they end up losing or settling with Planet Entertainment, they’re not too happy about the quality of the game overall, and they didn’t seemingly have many plans to market it beforehand either.

And for Planet Entertainment or the game’s actual developer (1st Playable)… Well, this is likely going to be one project they’re certain to regret working on.

Hence the chances of us ever seeing a ‘proper’ release are slim to none. The game’s reputation has simply been too badly battered to be salvageable at this point, especially with the rumours of bitcoin mining and overheating Switches floating around online.

Plus by the time the legal drama settles down, it might not even be practical to release the game anymore. After all, court cases do have a tendency to go on for years, especially when it comes to business related disputes like this.

Either way, that’s the situation here. The series IP owner and the Cookstar’s publisher disagree whether the latter had the rights to release the game, and they’re potentially about to end up in a court battle over it.

That’s why the game was pulled from sale, and why it’s unlikely it’ll ever see the light of day ever again.

Still, what are your thoughts on it all? Are you surprised a Cooking Mama game would be the source of this much drama? Who do you think is right here?

Tell us your thoughts on the matter in the comments below, over on the Gaming Latest forums, or on our Discord server today!