With well over 130,000 subscribers and many hundreds of thousands of views per video, The Lonely Goomba is one of the most popular Nintendo focused channels on YouTube. And well, with recent collab videos and crossovers with such other stars as Gaijin Goomba, Haedox, Guru Larry and the folk at GameXplain, his popularity is only getting better from here.

So let’s interview him! Here is our exclusive interview with the Lonely Goomba!

1. So a personal question to start with. Who are you? Who is the Lonely Goomba when he’s not making YouTube videos?

I’m just a guy who lives in the middle of nowhere. I try to keep my identity secret, since there’s a lot of crazy people out there. So I shall leave it as that.

2. And how did you get into this YouTube thing anyway?

Well, I hated my job. Working nights in a crappy factory. So I saved up a ton of money over the years, left my job, and decided to give Youtube a try whilst living off my savings. I guess it was a “all or nothing” kind of thing. If it failed, I’d be at step one working a crappy job again.

Had nothing to lose really. I don’t fully recommend doing that approach though, I just got lucky it worked out.

3. What about video games? What’s your history with Nintendo and their franchises?

I’ve pretty much been playing Nintendo games my entire life. Starting with the SNES, been hooked pretty much. Since then I’ve owned every Nintendo system, even the incredibly shit Virtual Boy.

These days I still mostly stick to Nintendo, which is probably why I never play games anymore. Make more games Nintendo!

4. For that matter, what are your favourite games and series? Do you have any?

I think my favourite series is probably Kirby. There hasn’t been a single bad Kirby game, and they’re still getting better. Mario, Zelda, Pokemon, they’ve all had bad titles, I don’t get excited for them anymore.

But when a new Kirby game is announced, there’s no worry of “Will it be good? Will they mess it up?”, it’s gonna be good, so don’t worry about it.

5. Oh, and what games are you playing at the moment by the way?

Some obscure JRPG that never came out in my country. Radiant Historia. It’s pretty good, but I’ve made the rookie mistake of leaving it alone for a few weeks and now I have no idea what I’m supposed to do.

So, that might be the pre-mature end of my Radiant Historia adventure.

6. Onto channel stuff now. Why did you choose the Lonely Goomba as your username? It’s not a common word used in critic names…

7. How about the concept? What inspired the idea of an average Goomba giving his opinions about games from a random Mario level?

Well the concept changed a lot. It started off as a lets play channel (the videos were never made public), but I sucked at it. I was so nervous I got drunk just to talk in front of the mic. So that was pretty much a disaster.

So then I decided to make it scripted, but the original script and Goomba was a positive happy review. But again, I sucked at it. I realized, I’m a pretty grumpy person, and re-wrote the script, ripping into the game and only focusing on the negatives. It was much more fun to write and record.

So I wrote it, recorded it, and made the entire video in a day. Probably an hour or so, and then I made the second video immediately after on the same day. And thus is the story of Lonely Goomba.

8. Heck, how do you choose games to cover? Because there’s quite an assortment of random titles you’ve made videos about by this point.

Most of them are games I played as a kid. So I just go through my backlog of actual games and see if they work as a video. Other than that, I usually just browse gaming lists or watch videos of bad DS games and see if any ideas come into mind before playing it fully.

So if say, there’s a licensed game that I know people will enjoy watching, or is relevant at the time. (Like SpongeBob or Powerpuff girls) I’ll try to pick one of those games. But more often than not, just a random game that pops into my mind.

9. You also seem to have a fair few guests in your videos too, with Haedox, Guru Larry and Gaijin Goomba all appearing in videos. How do you choose who to work with?

Well, it’s hard to just randomly go up to someone you’ve never talked to before and ask to guest star on a video. So, I usually approach people I’ve either talked to before, or we both like each other’s work. I don’t tend to collab for the sake of it, only when it seems like a natural fit for the video.

10. In recent years, it seems you’ve said a fair about the repetitive themes in modern Mario games. Are you a bit tired of the series and the New Super Mario Bros inspired direction it seems to be going in?

Honestly, I’m completely done with the Mario series at the moment. Like I say in my videos, they’re fun games but there’s nothing to get excited about, just some decent platforming and then it’s over. I’m worried Mario has pretty much reached it’s peak and there’s nowhere left to go or innovate with.

Noticing the new Mario on the Nintendo Switch looks more promising though, but not getting my hopes up. 11. However, you also seem to quite like Paper Mario Color Splash, which surprised a few people. What made you grow to like that game more after actually playing it?

Well, it’s not easy defending a game a ton of people hate (without actually playing it). I went in expecting to hate it, and rip into it. I planned to do a video about that game. But I cannot call a game bad, when it’s very well made.

I understand Sticker Star is hated, and for good reason, it’s a fundamentally bad game. Color Splash fixed every single issue with the game, it’s funny, perfect pacing, fun, more creative levels and scenarios… it really got the spirit of Paper Mario back. 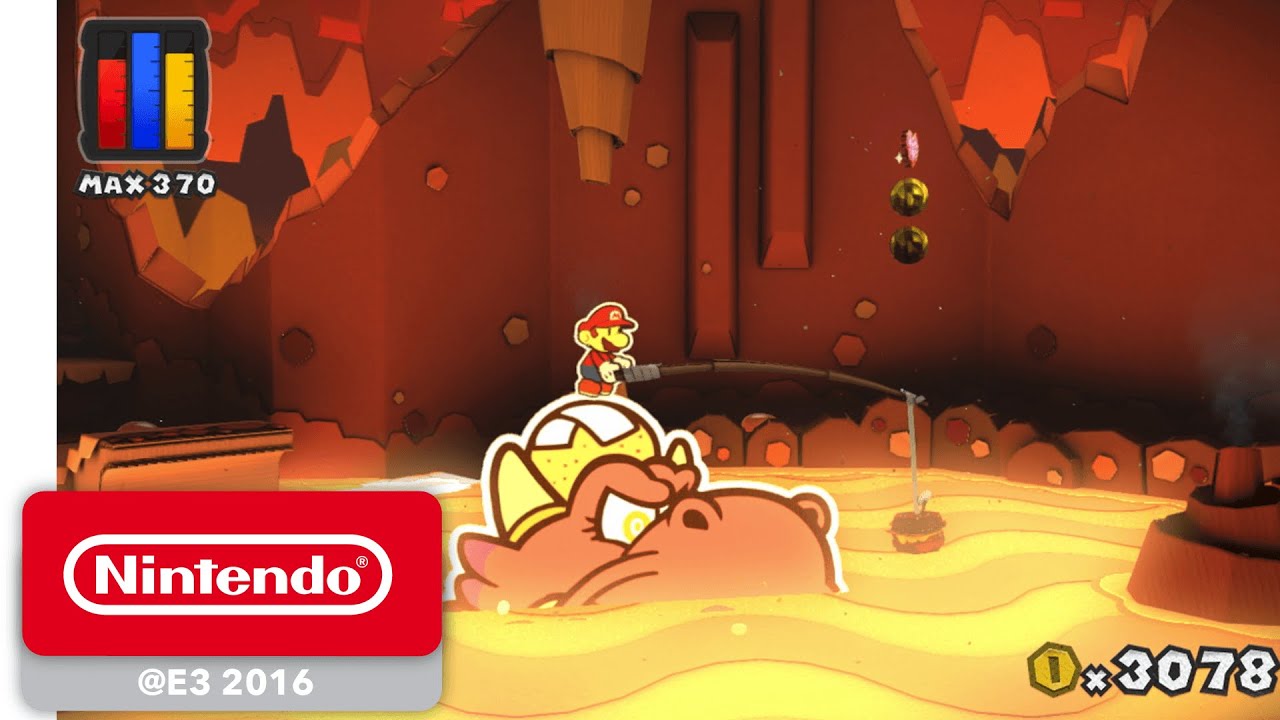 It’s just a shame Sticker Star was so bad, no one wants to give the franchise a fair chance.

12. And how was it being in that GameXplain episode with Arlo and Josh Thomas?

I was so nervous to be honest. I live in a noisy house so I had to make sure there would be no noises / talking in the background. That and the planned recording time kept changing.

And then I was with Josh Thomas, who’s very very vocal and opinionated. It was pretty hard to get a word in I’ve gotta say. But, despite that, was a ton of fun. It goes so fast, I had a lot more to say but the topic changes before you get a chance to say.

Still, I enjoyed it so much I’d like to be invited back one day.

13. On a less game specific note, how does it feel to have reached more than 130,000 subscribers on YouTube? Did you expect to get such an incredible number of subscribers?

Feels good man. Although I haven’t been counting them much lately. I somewhat miss the days of when every new sub was a massive achievement, now it’s impossible to keep track of it.

But I also appreciate more people like my videos, so, the more subs the better really.

14. How about the monetary side? Is the channel your full time job now?

Well, at the moment I’m living off Youtube and still the money I saved up from my previous job (I saved up a ton so it’s still there).

I’m in the process of moving out so, we shall see what happens. If I need a real job to survive, I’ll still make videos. If I can survive off Youtube, I’ll probably make twice as many videos in order to keep the channel sustainable.

So, I’m just clinging on basically.

15. I’ve also noticed that (unlike a few YouTubers), there’s no Patreon for your channel. Is that something you don’t have any interest in having?

I have a Patreon, I just don’t like promoting it much. Patreon has such a bad rep due to it being misused by certain people so I feel self conscious and nervous asking for money.

16. How about an official website? Because there isn’t one of those linked from your YouTube page either.

No one really uses websites to view videos. Sites like Normal Boots and Hidden Block, people just watch it straight from Youtube these days. So, wouldn’t be worth the trouble.

17. And have you ever considered partnering with other YouTubers as part of a group? Because I know Gaijin Goomba joined the Game Theorists, JonTron used to be part of Game Grumps and other video makers have joined Channel Awesome. Have you ever thought of getting involved in something like that?

I’ve thought about it. My dream team is Arlo, ItsaDogandGame and me. The super trio of animated characters.

18. On a similar note, what other YouTube channels do you watch on a regular basis?

I’ve kinda got bored of Youtube lately, especially gaming channels. (Which I used to exclusively watch). So now I watch H3H3 Productions and RedLetterMedia, and that’s about it. Always on the search for something new though.

19. Do you have any interesting future plans? Like games you want to make a video based on, or non video related projects you might be interested in starting at some point?

Well, an idea I’ve had in my head for a while, and I’d say is quite likely to happen, is to introduce serial elements to each episode. I have a story arc planned out, with each episodes ending leading onto the next video. The only issue I have is how to find an excuse to play DS games during each episode.

But yeah, that is the likely evolution of the channel.

20. Finally, what advice would you give new YouTubers who want to run a successful channel?

Just make a video. Everyone’s first video will be terrible so just get it over with. I started Youtube with no animation or video editing skills. I had no idea what I was doing (and it shows), but if you just keep at it, and try to improve something each video, you’ll end up with a pretty swanky channel by the end of it.
And that concludes another interview. It was an interesting one for us (especially in regards to stuff like a story arc in Lonely Goomba videos), but what about you? Are you a fan of the Lonely Goomba’s YouTube channel? Did you find the interview interesting to read?

Post your thoughts on the matter at the Gaming Reinvented forums or on social media today! And if you want to see more from the Lonely Goomba, go ahead and subscribe to his channel too! It’s well worth it!