In general, Mario bosses have never usually been the hardest of the lot, with the game generally featuring bosses that were far easier than the levels preceding them.

But not all video game bosses are created equal, and so there are some Mario bosses so pathetically easy that it’s almost a sign of a lack of effort from the developers. The type of bosses that would be easier than the level even if placed in level 1.

These are the top ten easiest Mario bosses.

Especially his first battle, where he just runs and back and forth and ducks into his shell after each hit. You know, he’s basically Boom Boom from SMB 3 now I think about it, the general battle and minor changes in attack patterns mean that the Bowser Jr fights in this game were basically a homage/lazy rehash of the Boom Boom fortress battles in Super Mario Bros 3. 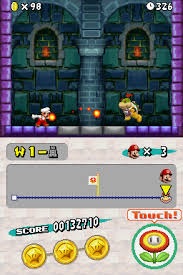 Above: This has to be the most boring setup for a fight in Mario history.

Bowser Jr is in at number ten. He’d probably be higher if the arenas didn’t vary based on the world theme and fortress gimmick, but nothing changes the fact that he’s one of the simplest and easiest to beat bosses in the Mario series.

Slightly more of a joke in New Super Mario Bros 2, but still not a hard boss in Super Mario World, Reznor makes the list simply because he’s so predictable.

For example, in his original game… there’s just one Reznor fight. Yes you fight him four fortress levels, but practically speaking they’re all the exact same thing with no differences in attacks or boss arena layout.

Reznor also lacks something most other bosses have, a health bar. Instead, you’ve got four Dino Rhino style things on a wheel, and hitting one from below defeats it.

What this translates to is simple; once you’ve beaten Reznor once, you can beat him in every single battle with him in the game.

New Super Mario Bros 2 only makes him worse. Yes, the last two battles are arguably more difficult than any from Super Mario World, but generally he attacks so slowly and the bridge is destroyed at such a glacial rate that he doesn’t ever get to be a threat.

Not to mention how the first fight has just two of them. Yeah, real difficult battle there!

Above: Defeated in just TWO seconds?

Reznor was never difficult, but New Super Mario Bros 2 managed to tone him down and make him even more of a joke. Hence why he’s at the eighth spot on the list.

If being able to skip a boss battle was good enough to get a boss to the top of the list, this guy would have sailed straight to the top. Why? Because there’s an open exit door in the boss room, meaning that the battle can be skipped entirely and the level still count as complete. 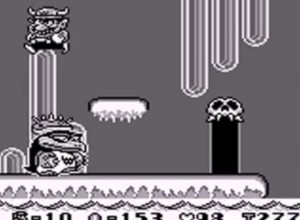 But, he’s only at number eight because of two things. Those being that he could theoretically kill you if you don’t know what you’re doing, and how you need to think a bit to figure out his weaknesses from the second hit onwards.

So with an exit door in the same room and a basic attack pattern, the penguin boss from Wario Land reaches the eighth place on the list. However, there’s certainly far easier…

Not the difficult one that shoots electricity in the ‘cake lane’ section of the Toy Time Galaxy or the initial one in the Gold Leaf Galaxy’s third mission, here I mean the last one you fight in the Deep Dark Galaxy starting area.

Why is this one such a joke? Because instead of fighting it in a boss arena where there’s limited space to move and a real chance you’ll be knocked into something dangerous like spikes, you’re fighting him across the entire first planet of the galaxy.

And let me tell you, the first planet of Deep Dark Galaxy isn’t exactly a small one, it’s about the size of some levels in Super Mario 64. Here’s a nice picture for size: 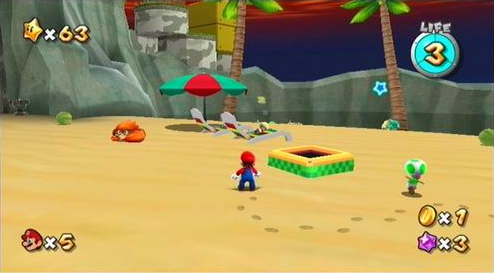 Above: See that cannon? That’s where the boss ends up.  The ‘arena’ is so enormous that avoiding his attacks is pathetically easy (and they don’t do any damage anyway).

What was already a fairly easy boss just becomes outright pathetic when you’ve got plenty of cover and a very, very favourable landscape to battle him on. It’s almost like what’d happen if you fought the Big Bob-omb in the middle of Bob-omb Battlefield, you have no practical way to get ‘hit’.

Oh, and he’s completely pointless anyway. Despite the intention of the developers being to use his cannon to blast to a planet in the sky nearby and get a Fire Flower, you can just reach whatever area you need to get to with some well timed wall kicks.

Weak, unable to directly kill Mario and fought in the worlds largest boss arena, the Undergrunt Gunner is a weak boss who doesn’t even need to be defeated. 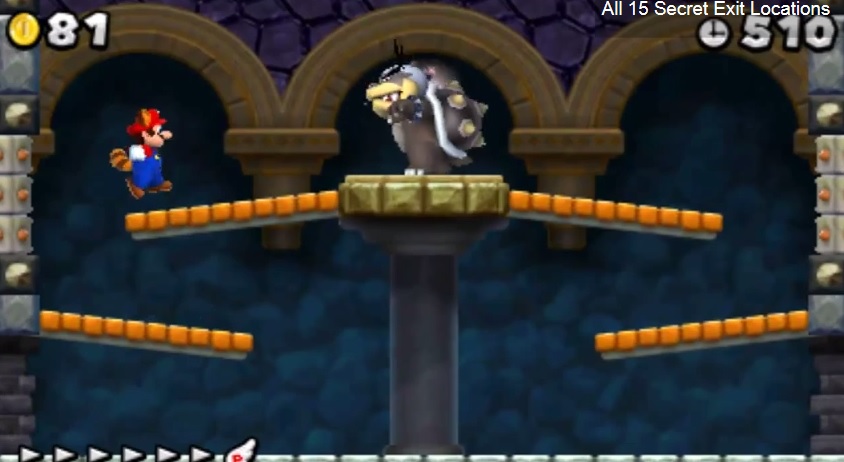 Why? Because you can dodge every single attack he uses without technically doing anything other than jumping straight up. If you’ve got a Gold Flower, this means the battle is over in about ten seconds.

But the real issue is that where every other boss spins across the floor in their shell and bounces off the walls, Morton just slides off screen and appears from the top again. Outside his shell.

This means that you can just jump on him whenever he appears at the top of the room, dodge his initial shell charge and literally never let him get an attack in.

For this reason, Morton is quite literally the most pathetic boss in New Super Mario Bros 2.

Also known as a great case study on how not to design an interesting boss battle. In theory, Topmaniac is meant to be a ‘bullfight boss’, an enemy which charges towards the player and has to be dodged carefully to get a hit in.

In practice, he’s so damn slow and such a big target that you’d have to be near brain dead to actually die in the fight.

So why is he easy? Well for one thing, he doesn’t charge until his minions are dead. He also doesn’t get out the way until said minions are dead, so he’s open to attack… and usually doesn’t bother to fight back.

He’s also got a ridiculously easy to spot weak point. Can you figure it out?

And considering how small the arena and how large a target Topmaniac is, it doesn’t take too many spin attacks afterwards to knock him into the electric fence.

Oh, you want to know how easy this thing is? You fight him in a Daredevil Mission… and it makes absolutely no real difference to the difficulty of the boss battle. I repeat, if a boss is too slow and too stupid to be able to kill someone when one hit kills them instantly, it’s both poorly designed and far too easy.

But while he’s easy, he’s not quite the easiest boss in the Mario series. And right above him on the list? His Mario 64 equivalent…

What more needs to be said? He dies in one hit and cannot harm Mario directly. In fact, his Mario Kart DS fight has to be one of the most comically short boss battles in history: 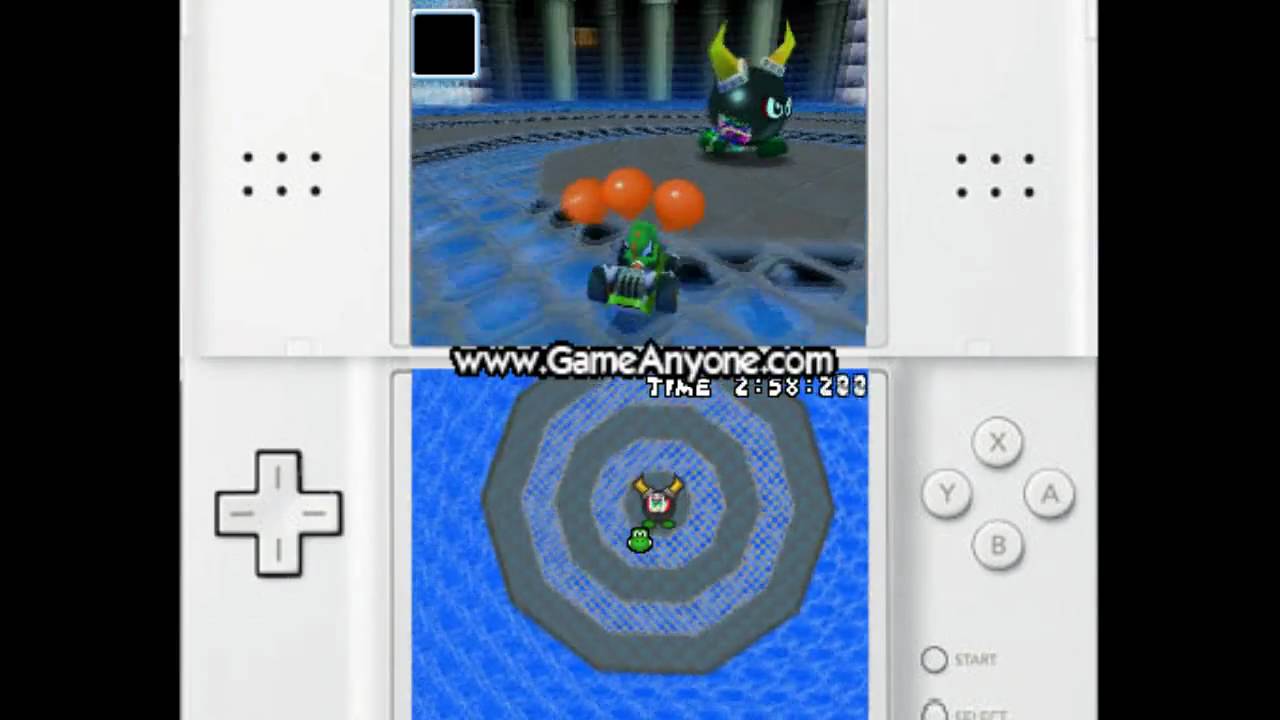 To make it worse, in his original appearance, you can easily end up next to him with a power up or something. And the minute you have a shell to surf on or a magical cap, he’s practically done for.

Big Bully is a pathetic boss. No more needs to be said.

Think Big Bully. Now imagine instead of having to push him off, you could actually pick the boss up and chuck him to his demise.

It actually makes for a boss EASIER than the Big Bully. Indeed, if you look at the video below, the time taken to defeat him is under ten seconds.

Above: Did you see that? Oh wait, the battle was over in about nine seconds.

The stereotypical easy boss, Cloud N Candy is just plain pathetic. He’s eaten to death, and you even heal while eating him. He’s slow and with no interesting attack pattern. Everything a game can get wrong that makes a boss too easy is in play here.

Here’s a video to show the boss battle with him:

He’s definitely a joke and one of the easiest bosses, but is he the easiest in Mario history? Not quite…

Yep, you heard that right. While Cloud N Candy is infamous across the internet as the prototypical example of a pathetically easy boss, I don’t honestly think he’s the worst one ever.

I mean, you could theoretically die if you stood still too long or were too stupid to realise you’re supposed to eat him to death.

But Gilbert the Gooey from Yoshi’s Island DS is even more pathetic. For one thing, he doesn’t move.

Which means his single attack is to swing back and forth at two fixed heights. It’s entirely possible to just stand in one place and not take any damage whatsoever. He also can’t reach the corner of the screen, which means if you stand there you’re complete immune to taking damage.

Did I mention you eat him to death, just like Cloud N Candy? Or that you can blast him to bits from a distance with eggs? Or that returning with DK and shooting the centre of his body can destroy him in one hit?

Here’s the boss I mean:

Above: Someone who might theoretically lose to Cloud N Candy in a fight.

So there you have it, the ten easiest Mario bosses in the series, complete with one who’s even more of a joke than Cloud N Candy. Do you disagree with my choices? If so, comment below!