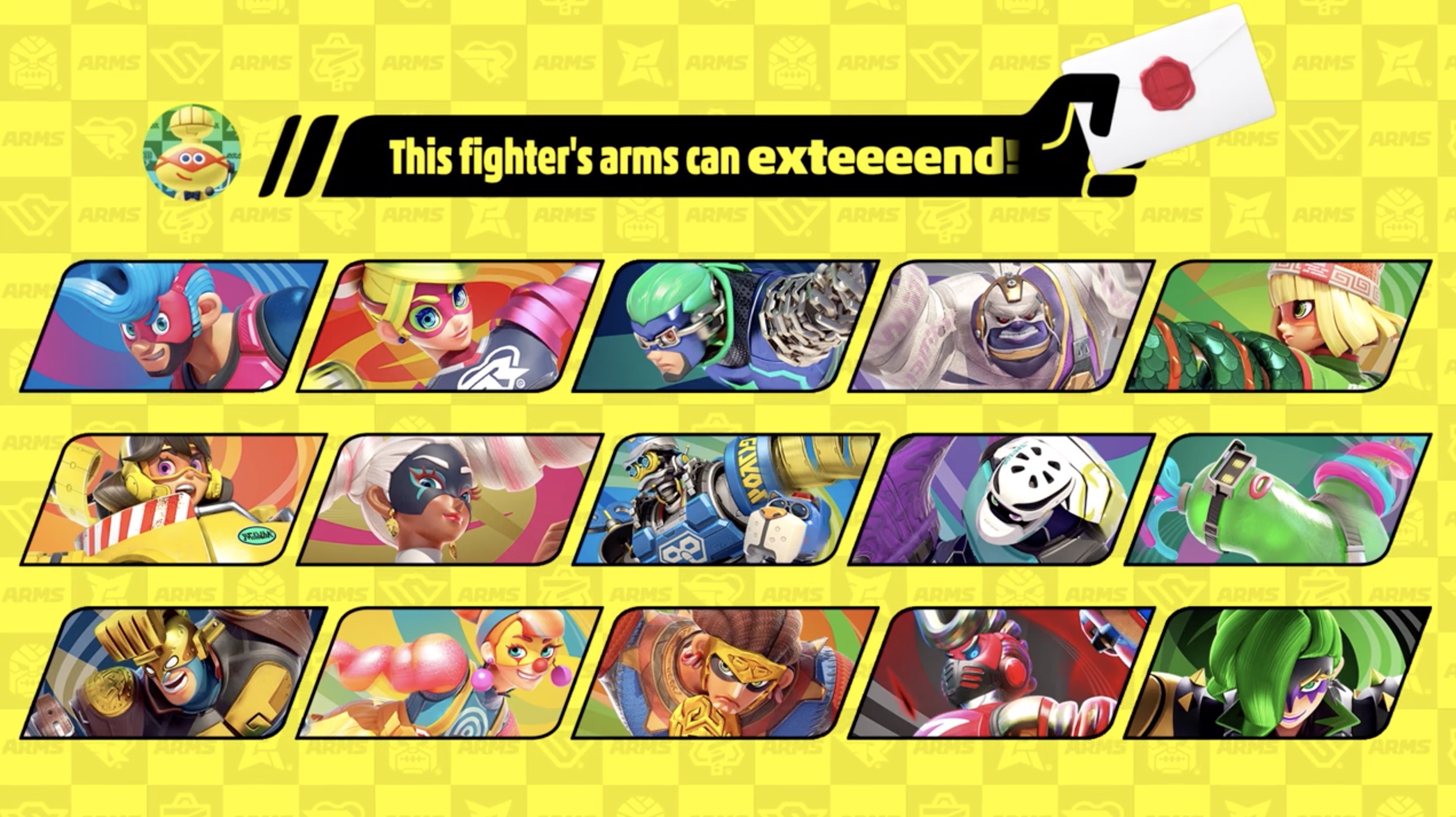 Earlier today, Nintendo posted a new Nintendo Direct Mini online. In that Direct, they announced the next fighter for Super Smash Bros Ultimate would be from ARMS, and that’d they’d be the first inclusion in the game’s second Fighter Pass/Challenger Pack.

However, they never said who it was, nor confirmed anyone outright. Would it be Springman, as the game’s defacto protagonist? Biff or Helix, as defacto mascots? Or perhaps someone else entirely, even one no one expected to begin with?

It’s all possible, and it’s all up in the air right now.

So in this article, we’re gonna see if we can figure it out, and see which one of ARMS’ many characters might be its representative in Super Smash Bros Ultimate!

Starting with the obvious one, and the game’s main man; Spring Man himself.

Given how most DLC characters work in Super Smash Bros Ultimate, he’s a very obvious choice for a new character here. He’s the default fighter, he receives a lot of attention in marketing material, and his moveset is as vanilla ARMS as you can get, being the best representation of the series as a whole.

Putting him in the game to represent ARMS would make a whole lot of sense.

Except for one thing.

Spring Man is also an assist trophy. This throws a few spanners into the works there.

Especially when you realise that not only have assist trophies only rarely been promoted to fighters to begin with (Little Mac in Brawl and 3DS/Wii U), but that it’s never happened in an update or piece of DLC either.

So the dev team would need to figure out how Spring Man the character and Springman the assist trophy could coexist together. Would it block the assist trophy from appearing at all in Spring Man showed up? Replace the assist with Springtron, or vice versa? Go for the ridiculous and have Alfonso from Spirit Tracks stand in for Spring Man, like all the old memes suggest?

Who knows, but it’d likely require some careful thinking none the less. Perhaps an alternative fighter would work better…

Of which ARMS offers many choices. Its roster may not be as big as Street Fighter, Mortal Kombat or Super Smash Bros itself, but it still offers a fair few fighters to choose from, with 15 characters existing in the base game as of 2020.

But we’ll stick with the ones people seem to care about.

Like Twintelle, the pigtail haired film star that’s become one of the most popular characters in the game. She’s developed quite the fanbase since the game’s release, and is quite heavily requested among the fandom overall.

So there’s a chance she may make it into Ultimate in Springman’s stead.

There’s also the chance Max Brass could get in too. Why is this?

As a result, he could easily get the moves Springman would otherwise have got while leaving the former as an assist trophy, and it wouldn’t hurt his characterisation all the much.

Not saying Sakurai or Nintendo really care about that one way or another (*cough* Ganondorf *cough*), but it’s worth thinking about the none the less.

Alternatively, it’s also worth considering whether Helix might be in with a shot too. It’s a weird choice sure, but think about it. It’s Sakurai we’re talking about.

And if there’s anything we know about Sakurai, it’s that he loves going with more… out there character choices for his games. Like say, Mr Game & Watch back in Super Smash Bros Melee, or Wii Fit Trainer in 3DS/Wii U, or Piranha Plant as a Super Smash Bros Ultimate DLC character.

He loves weird and wacky characters that lend themselves to new playstyles, especially over standard protagonist types and generic fighting game stars.

Helix is very much that. He’s a weird and wacky science experiment come to life that can contort his whole body in any way he pleases, and he’s someone no one in a million years would expect in a Smash Bros game. Seems like a perfect Sakurai character choice to us!

However, that assumes Masahiro Sakurai will actually be the one choosing what character to include in.

Which doesn’t appear to be the case where DLC fighters are concerned. No, as mentioned a while back, Nintendo is apparently calling the shots for these guys, and they’re a bit more conservative in their choices than Sakurai himself.

But they do love their promotional deals, and it’s possible the next ARMS character will tie into that instead. Which could mean…

Said character might not be from the first ARMS game after all.

And that would perfectly explain why ARMS is getting chosen here. After all, doesn’t it seem a bit… strange that ARMS is getting Super Smash Bros representation in 2020?

Or that there’s suddenly this huge push for the game years after the DLC died down?

Yeah, we think it is. Especially considering that ARMS isn’t really the type of megahit that people would otherwise be talking about today. It didn’t do anywhere near as well as the likes of Super Mario Odyssey, Mario Kart 8 or Zelda Breath of the Wild when it came out back in 2017.

But it is an interesting IP with a lot of potential, and we’re sure Nintendo knows that.

So it’s entirely possible our Smash newcomer will be the main character from ARMS 2, and will have been chosen specifically to represent that game, like Byleth was before him/her. It’d certainly help build interest in the title, and get people excited for it when it launches late 2020/early 2021.

It’s possible we’ve been thinking about this all wrong. That our newcomer for Super Smash Bros Ultimate isn’t a single character at all.

But instead, is some sort of Bowser Jr/Koopalings type deal where players can switch between various ARMS fighters. That way there’d all have their own unique models, voices and commentary clips, but would play identically to avoid balance issues.

However, we don’t think it’s the most likely probability.

Instead, we still believe the most likely candidates for the new ARMS character are either Springman with some sort of swap out system for the assist trophy, or a newcomer based on an ARMS sequel due out late this year/early next.That seems most likely based on what we know so far, and most in line with how previous Fighter Pass newcomers have worked for this game.

That wouldn’t be true of the base game (in which Sakurai would likely choose a more ‘interesting’ choice of character to represent the series), but it makes sense given its DLC, and given Nintendo’s role in choosing who gets in on a corporate level.

However, what do you think? Could Springman be the ARMS rep for Super Smash Bros Ultimate? Will a newcomer be revealed for an ARMS sequel?

Or is there a possibility (no matter how slim) of someone else taking the roster spot instead?

Tell us your thoughts on the matter in the comments below, on Discord, or on the Gaming Latest forums today!