In Mario & Luigi Paper Jam, there’s a certain mission in Mount Brrr where you have to find Paper Toads hidden around the mountain village. Named ‘Paper Toad Freeze-Out’ the mission is supposed to be a somewhat pleasant Toad hunt in a nice scenic location. You know, just the standard Toad hunt mission setup.

Unfortunately, it’s nothing like a ‘pleasant’ experience. With randomised Toad locations (the only ones in the game), lying NPCs, a bad random number generator and a truly obnoxious time limit in Hard mode, Paper Toad Freeze-Out is the kind of mission that will drive you to utter insanity. No, the music doesn’t help either… 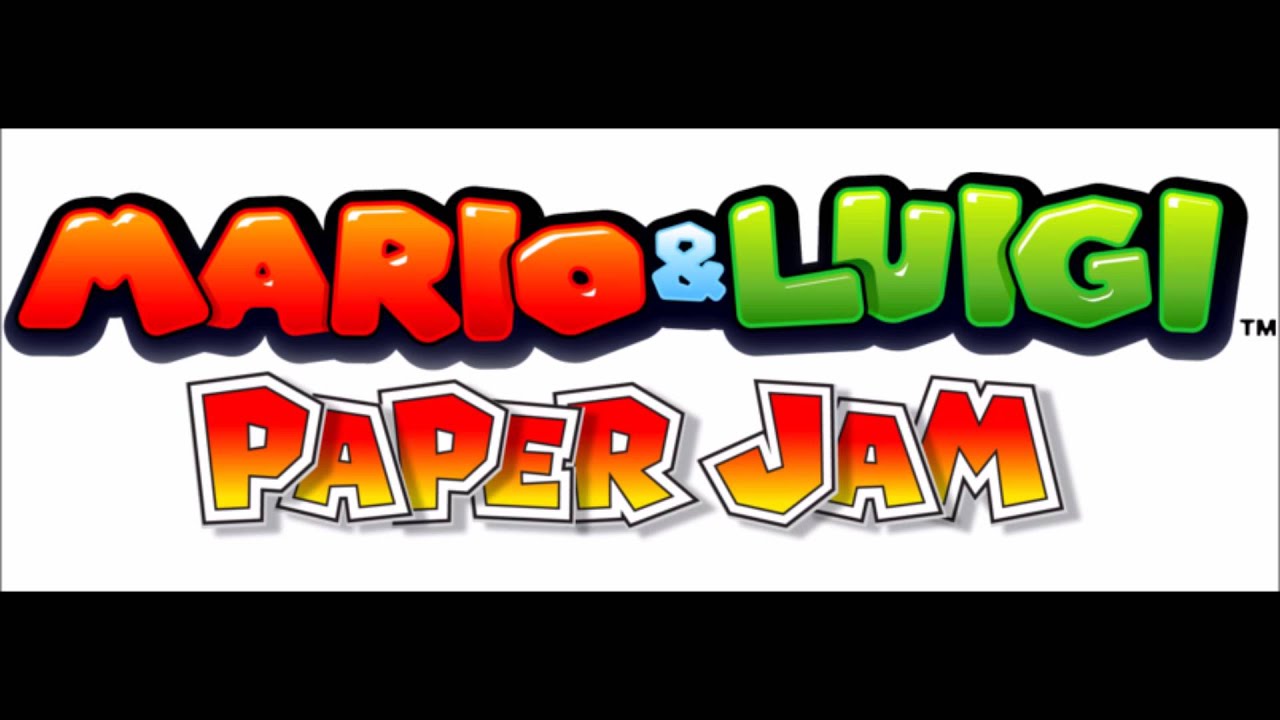 Above: The kind of song you’d play to torture inmates in a psychiatric institution.

So to save everyone from going mad, here’s a full guide to Paper Toad Freeze-Out in Mario & Luigi Paper Jam. Listing every possible location the Toads might be found in, as well as various other ‘tricks’ you may not know, we hope this guide will stop any more people having to ask about the level on various Mario related message boards and forums.

Whether a group of Toads or a Fuzzy spawns behind the shop you’re checking is entirely up to the random number generator. On some instances, you’ll get the Paper Toads right off the bat, in others, you’ll have to go through two, three or even four Fuzzies before you find the Toads you’re looking for. What’s that saying about insanity?

Well, this mission is only beatable if you’re lucky or a nutcase. Take that as you will.

Try and use a timer card to add five minutes to clock when playing the Hard Mode version. You can use one during a Fuzzy battle, which you will likely run into because the RNG hates your guts.

Check the fences. There’s almost always at least one Paper Toad found attached to a random fence in the area. 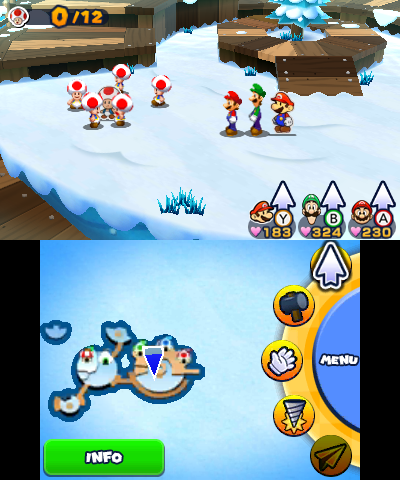 This Paper Toad is in plain sight amongst a group of normal Toads. Just speak to him to add him to your ‘collection’. 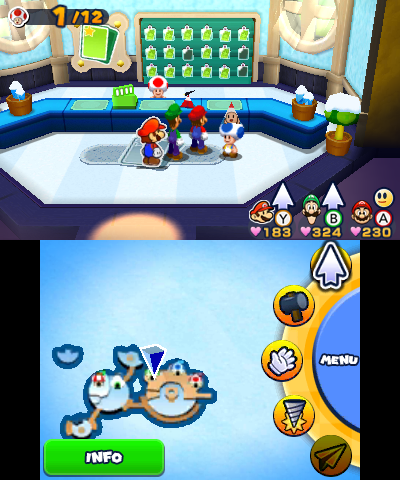 This Paper Toad is acting as a hat on this Toad’s head.  To get him, speak to the Toad and say that you like his hat, that you like the material and you want to touch it (the hat).

Note that to be extra annoying, the game makes two out of three right choices selected by default, then keeps one wrong choice as selected amongst them.  Presumably it’s so anyone mashing the A button to get through the cutscene cannot quickly get this Paper Toad without reading. 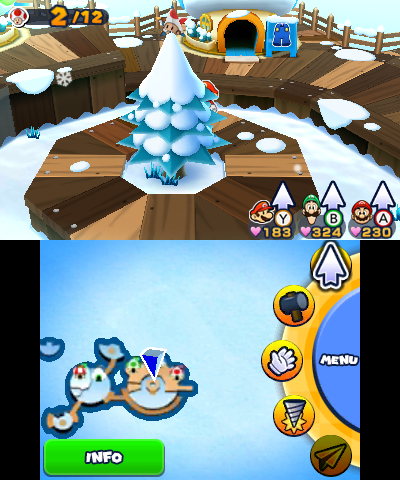 This Toad is folded into the shape of a star and stuck on top of the tree in the middle of the courtyard.  Like a Christmas tree decoration.  Trio Hammer the tree to get him down. 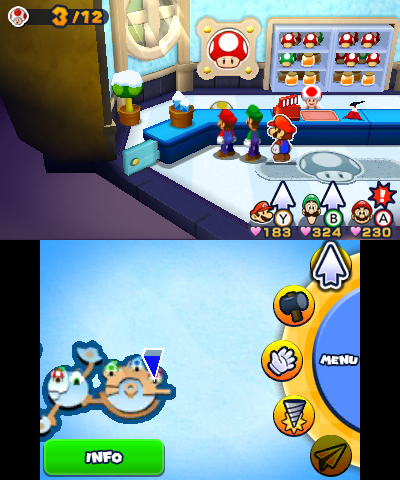 It’s hard to see, but there’s a yellow Paper Toad hidden behind the shop counter here.  Walk along until you see a exclamation mark inside a red spiky bubble, then press A to add this Toad to your collection. 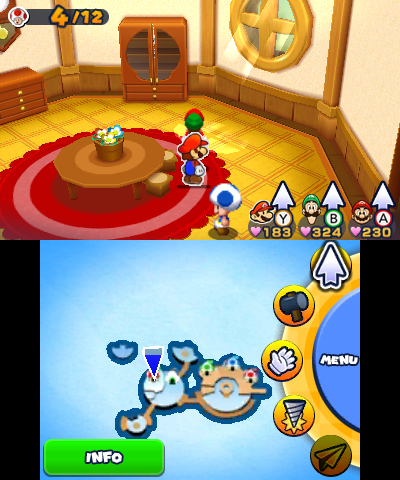 There’s a Paper Toad in the wardrobe here.  He spins around, so it’s easy enough to see him, and you’ll have to press A when nearby to get him out. 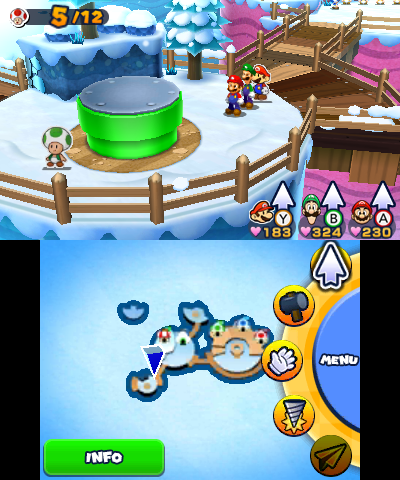 A green Paper Toad may spawn near the green exit pipe at the far side of the village.  Unfortunately, this one likes running away from Mario and co, so chase him round the pipe til you catch him. 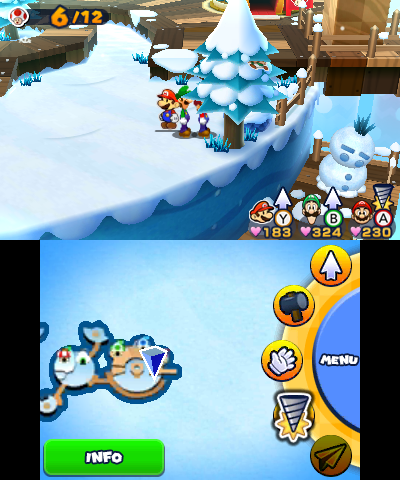 Here’s another Paper Toad, caught up in a tree near the right side of the village.  Trio Hammer the tree to get him down. 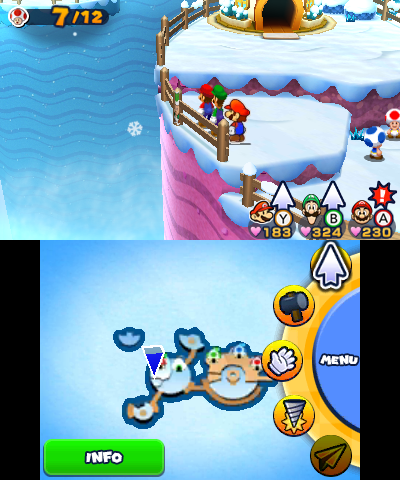 One of the fences a Paper Toad may spawn on.  Can you see him?  He’s wrapped around the fence post in the middle of the picture.  Walk up to him and press A when the exclamation appears to get him. 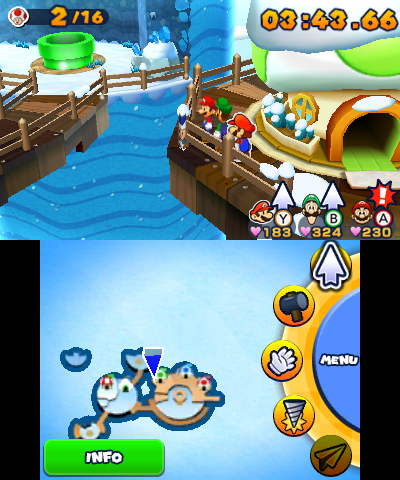 Another Toad wrapped around a fence, this time to the left of the Lakitu Info Centre.  You know the drill here. 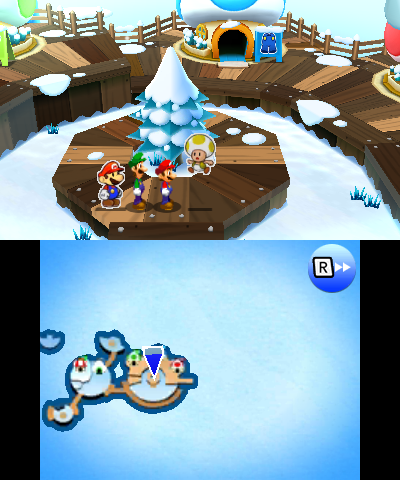 It’s not really possible to show this in a picture, but the Toad above sometimes appears if you walk around the tree in the middle of the central plaza.  He’ll start following the Mario bros, so turn around and speak to him before he runs away again. 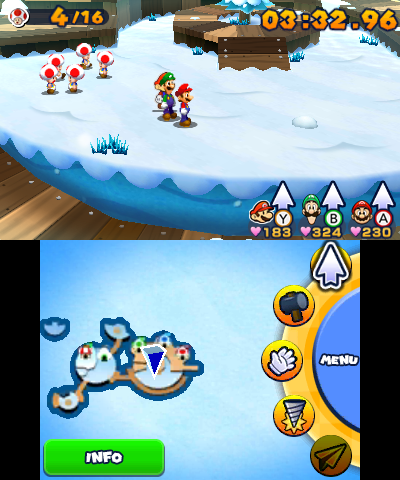 On some occasions, Paper Toads will appear underground, digging through the snow like the bros do after using Trio Drill.  This one appears in the central plaza, so dig underground and dash towards him to force him out. 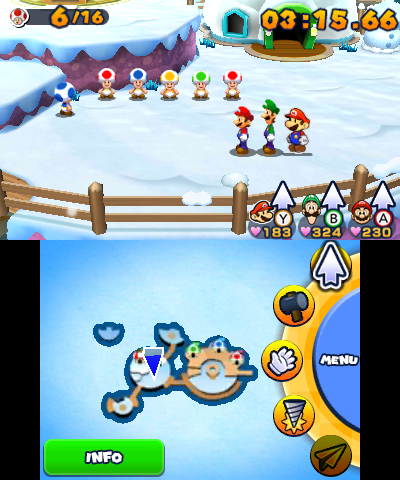 Same deal as above, except in front of the Lakitu Info Centre.  Uses Trio Drill and dash at the Toad to get him out. 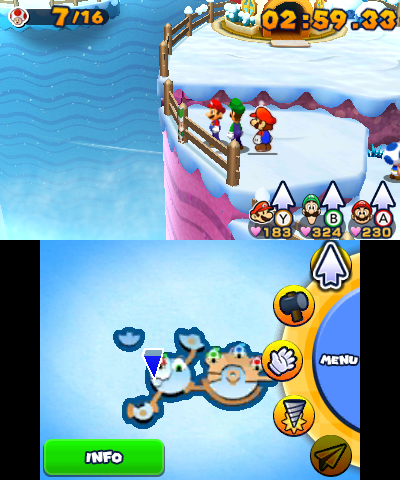 Another Toad on a fence.  It’s easy to get him down. 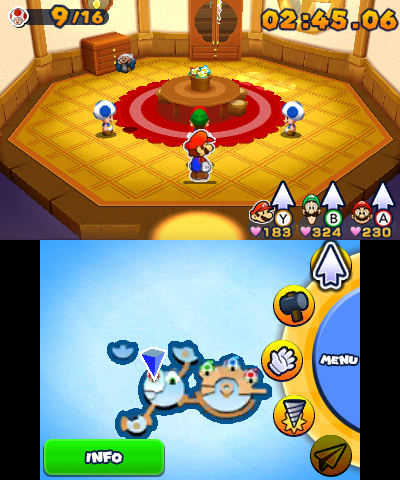 This Paper Toad has been folded up into a ball, and is being tossed between these two Toads in their house.  Jump or use Trio Grab to get him down. 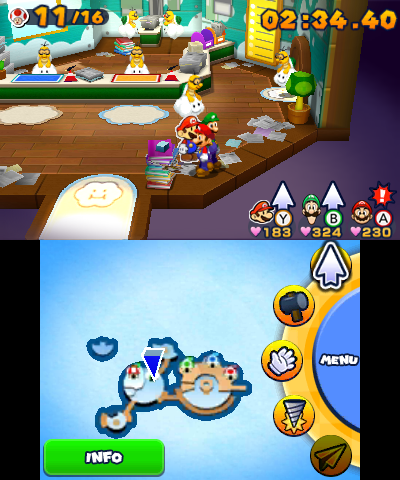 This Paper Toad can be found in the pile of books near the door inside the Lakitu Info Centre.  Press A when next to him to get him out. 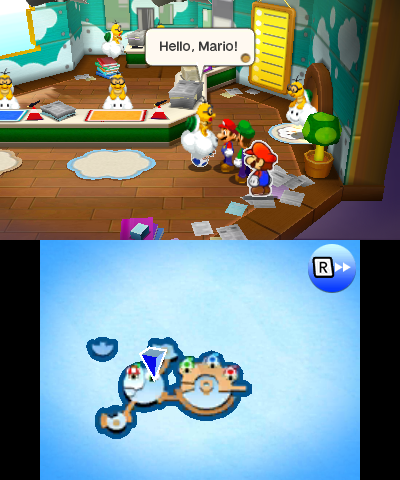 Sometimes, a Paper Toad can be found in this Lakitu’s Cloud.  You may have to keep questioning him, until he lets Mario and co ‘inspect his cloud’.  Either way, you can tell if a Paper Toad is in this cloud, because the Lakitu will keep moving up and down and trying to force it out.  It’s pretty obvious. 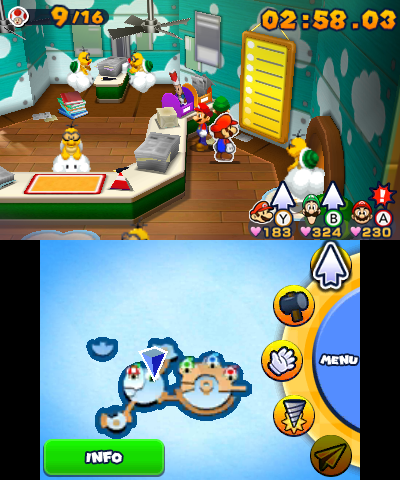 This Toad can sometimes be found in the box of paper to the back right of the Lakitu Info Centre. 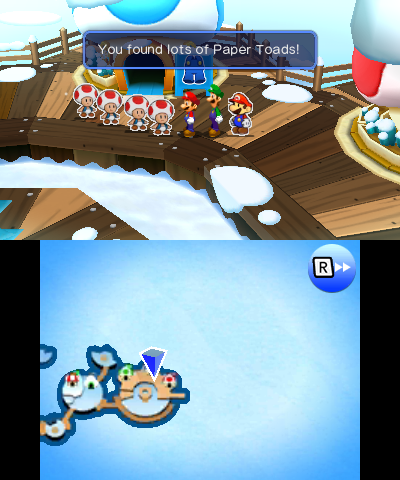 The awkward one, where you get four Paper Toads from behind a shop.  You just have to keep checking and clicking yes when it asks if you ‘want to look here’.  Eventually, four Paper Toads will run out.

And that’s Paper Toad Freeze-Out.  As far as we can tell, those are all the locations the Paper Toads might be found in, as well as the requirements necessary to make some of them appear.  Hope that helps you complete Mario & Luigi Paper Jam!

If we’re missing anything, post about it in the comments below or the Gaming Reinvented forums, or bother us on Twitter or other social media channels.