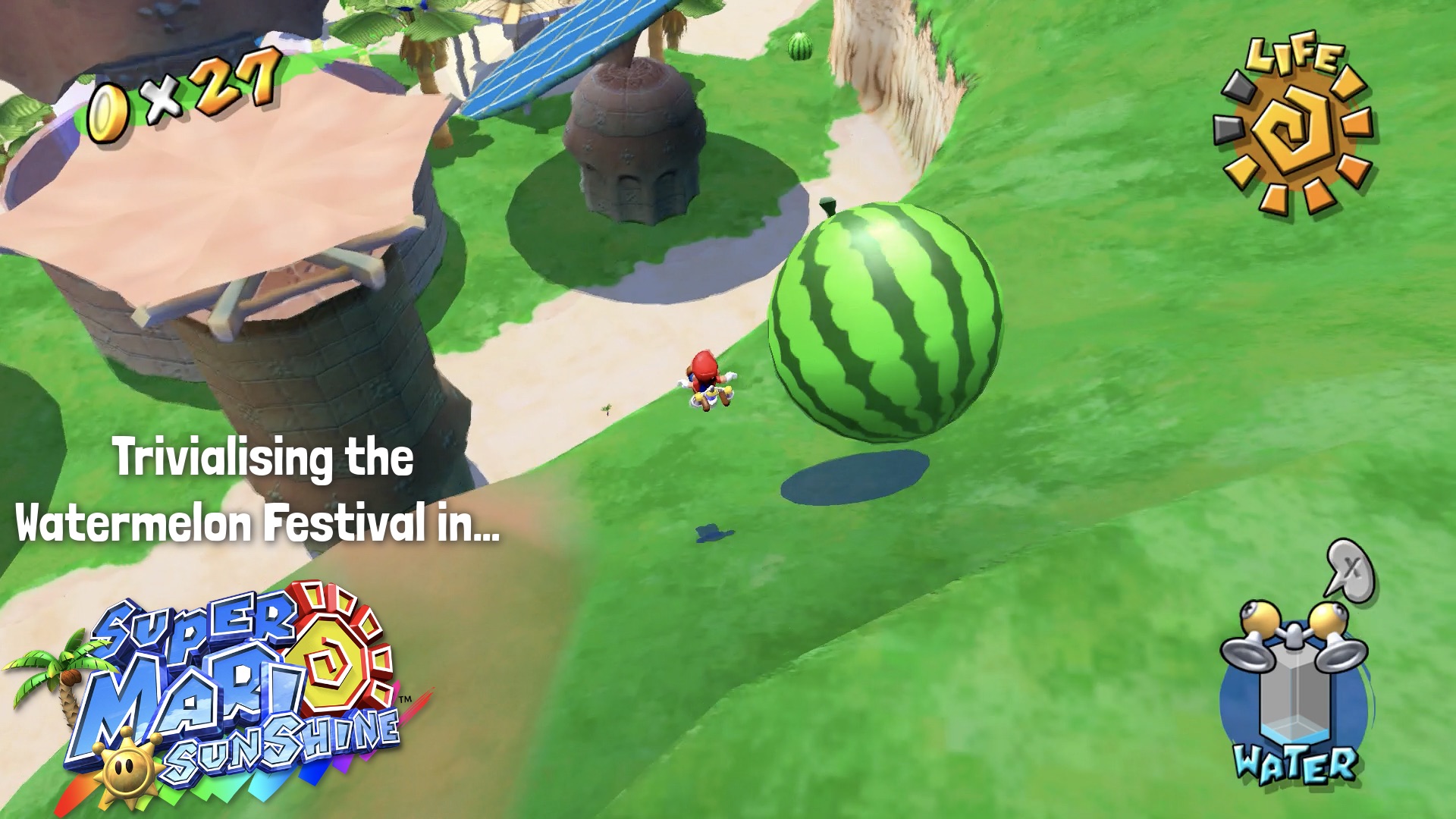 As anyone who’s played the game knows, the Watermelon Festival is one of the most annoying levels in the entirety of Super Mario Sunshine. Based around the idea of taking an oversized, easily popped watermelon to an awkwardly placed restaurant at the edge of the level, the stage is an absolute hassle to play, since everything and its dog seemingly wants that melon destroyed at all costs.

This is especially true of the Cataquacks, who will take every opportunity to fling the watermelon into the air if they come into contact with it. This immediately destroys said watermelon, and makes all your work in the last 20 odd minutes completely moot.

What’s more, while the lower level ones can be defeated by luring them to a dune bud and activating it, the same can’t be said about the upper level ones. These won’t chase you off ledges, nor will they get defeated by the only dune bud found in the area.

So anyone taking that big watermelon down the mountain usually has to bring it through a veritable minefield of angry ducks, with obvious results.

Fortunately though, it turns out there is a solution. A nice, simple way to make the level an utter cakewalk. Here’s a video guide showing the technique in action:

As well as a more detailed guide in text format below.

Basically, the Cataquacks in Sunshine aren’t very smart, and can be easily tricked into falling off the ledge. You can technically do this with any ledge if you’re sneaky about it, but this ledge works best overall: 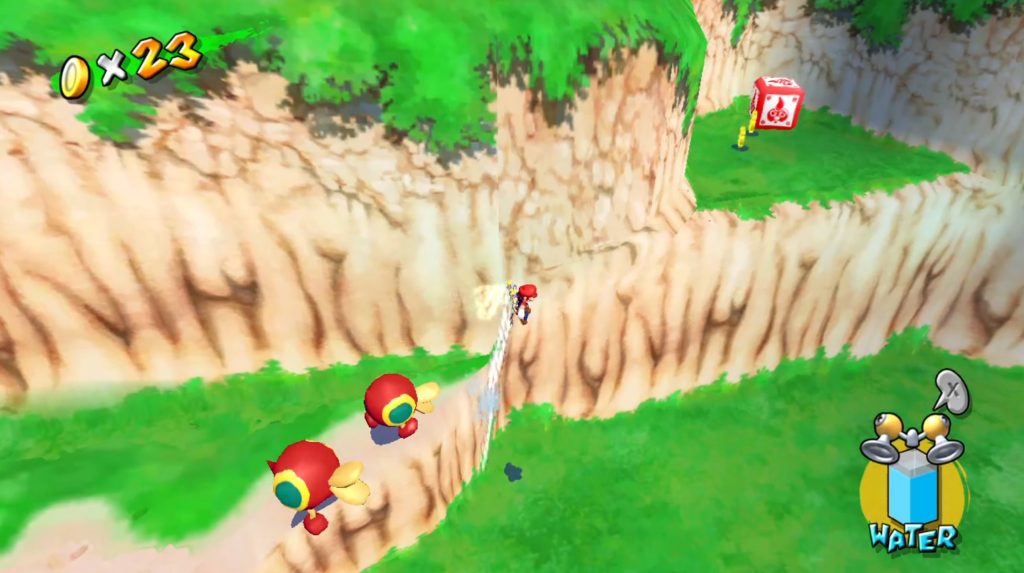 Once the Cataquacks are there, jump over them/round the ledge a bit. If done correctly/you get lucky, they’ll fall off the ledge to the area below.

Where their AI will start to break. Instead of wandering in a circle, they’ll desperately walk into the wall in hopes of getting back to their original spawn point.

This obviously won’t work for them, so instead go near them on the left or right side. By doing this, they’ll chase Mario again, and forget about their original home.

Now, go near this tree and head down the slope. For some reason, the Cataquacks won’t consider this a ledge, and will keep chasing Mario down onto the main beach. 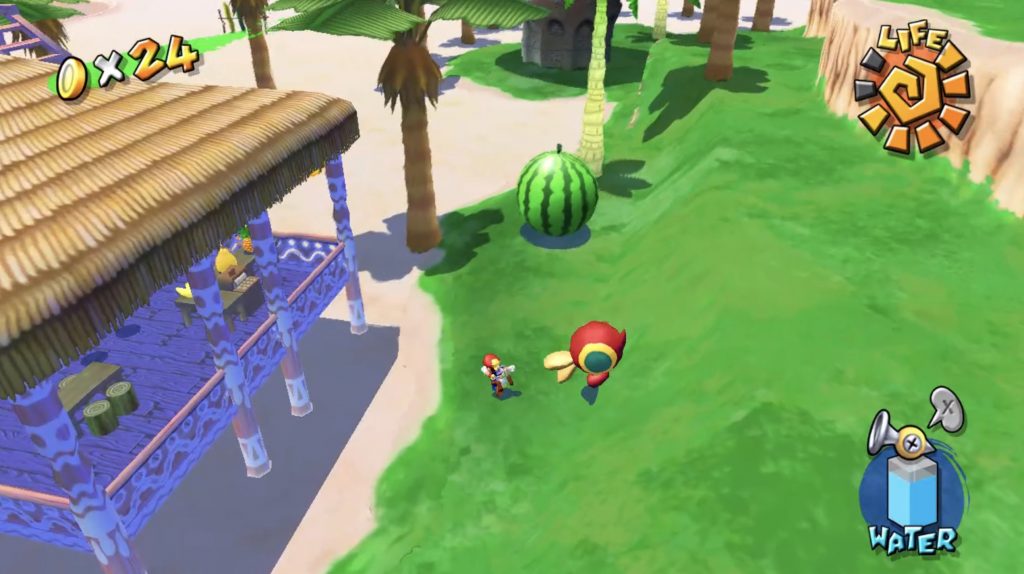 From here, just activate a dune bud as usual, and voila, you’ve defeated a thought undefeatable Cataquack, and made that upper level all the easier to navigate. Just do this a few more times, and hey presto, the upper area is now completely void of enemies and much easier to take a giant watermelon through without any hassle.

Of course, this solution isn’t very fast. Whereas a normal run of the level might take about 10-15 minutes if done well (or 5 minutes if a tricky speedrun glitch is used), a cleared out version with this trick will likely take a good 10-15 minutes longer. So if you’re planning to speedrun the game, or you’re a great player, this might not be something for you.

But it’s a much simpler, safer way to finish the level for everyone else, and means even the most casual players are going to be able to clear the mission without any trouble whatsoever.

Either way, what do you think? Are you happy to see a way to make this episode that much easier? How likely are you to use this trick in your own future runs of the level?