As you may know, Paper Mario: The Origami King has no shortage of interesting secrets and details. From special trophies awarded from clearing mini games to alternate game over scenes caused by doing all manner of ridiculous things, the game is packed to the bursting with things to discover for players willing to leave the beaten path.

However, some of these secrets are a bit more obscure than others. From musical nods to cameos, boss tells to money strats, there are a lot of small things even many of the best players will likely miss out on entirely.

So in this article, we’re gonna look at 8 of them. 8 secrets that you may not know about Paper Mario: The Origami King! Here’s a video if you prefer these things in that format:

Whereas if you prefer the list in text format, you can keep reading. Ready? Let’s do this!

Starting with an interesting detail you may not have noticed about the game’s difficulty system. Basically, it’s a dynamic one, and means the game gets easier the more you mess up.

For instance, if you lose the battle against Scissors too many times, you’ll get a save block after the Paper Mistake Buzzy Beetle boss beforehand, saving you the need to refight it every time you lose in future.

And if you mess up various challenges in dungeons, they’ll be toned down too. The blocks you need to break in ice sliding puzzles will be coloured purple after too many mistakes, the path you need to follow in the Fire Vellumental cave will be simplified in the same situation and you can pay to make the trials on Diamond Isle easier too.

Much, much easier as it turns out. The quiz questions you get after messing up are so ridiculously easy you’d have to be trying to mess them up:

Mario has a green L on his hat, true or false?

The main villain is named King Olly, true or false?

They’re not going to challenge anyone who’s played the game in any way, that’s for sure!

Regardess, it’s a neat system, and one that makes the game much, much more accessible to less experienced audiences.

7. How Many Zelda References Does One Game Have?

The Origami King loves his Zelda references too. There’s obviously the Great Sea, which is one huge Wind Waker reference down to a sea chart, island hopping, diving for treasure and a tower like dungeon leading a mystical land:

And one Toad in Autumn Mountain references Breath of the Wild’s infamous stamina system and rain too: 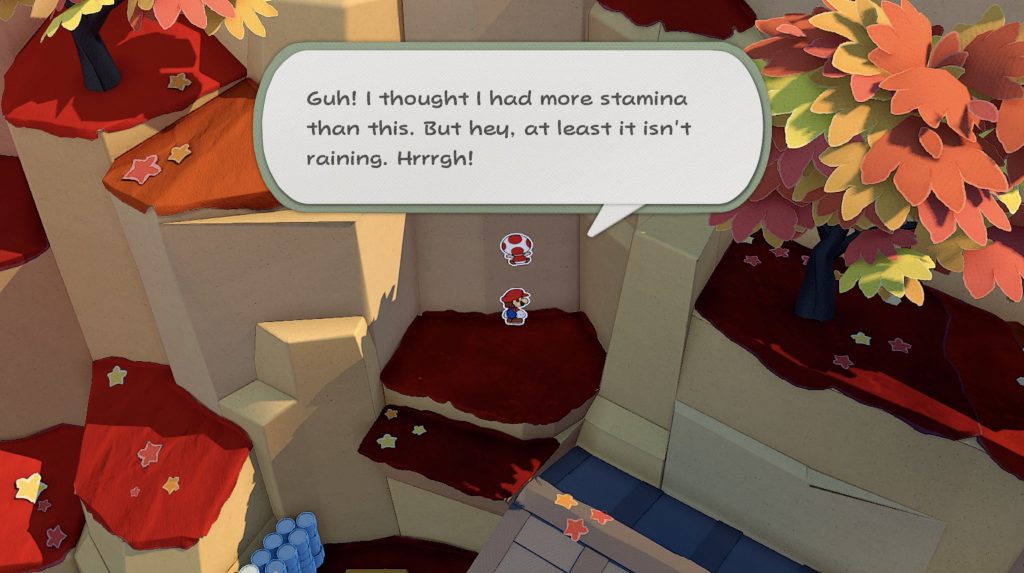 But did you know there’s another one that more people will miss? Yep, in the Japanese version of the game, Ol’ Grandsappy is named Grandfather Deku, which seems to be a reference to the Deku Tree from the Legend of Zelda series. 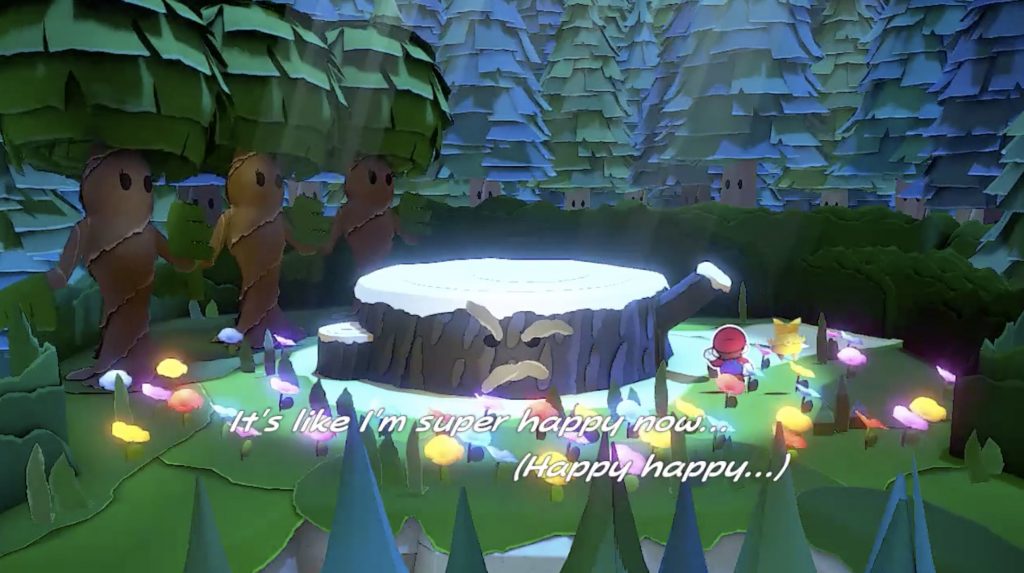 It’s a neat reference, and one which sadly got left out of the English version of the game.

But Zelda isn’t the only thing to get referenced here. No, Origami King is full of references to earlier Paper Mario games too.

Obviously you all know about the Princess Peach pictures in this room, which show Peach in every game in the series:

As well as the Spring of Rainbows, which is very clearly a Color Splash reference and looks/acts just like Port Prisma’s fountain from said game.

But the Overlook Tower has a few neat cameos too. Namely, these paintings, which show the Violet Passage and Emerald Circus from Color Splash respectively:

It’s a pretty neat background reference, and one many players are sure to miss. 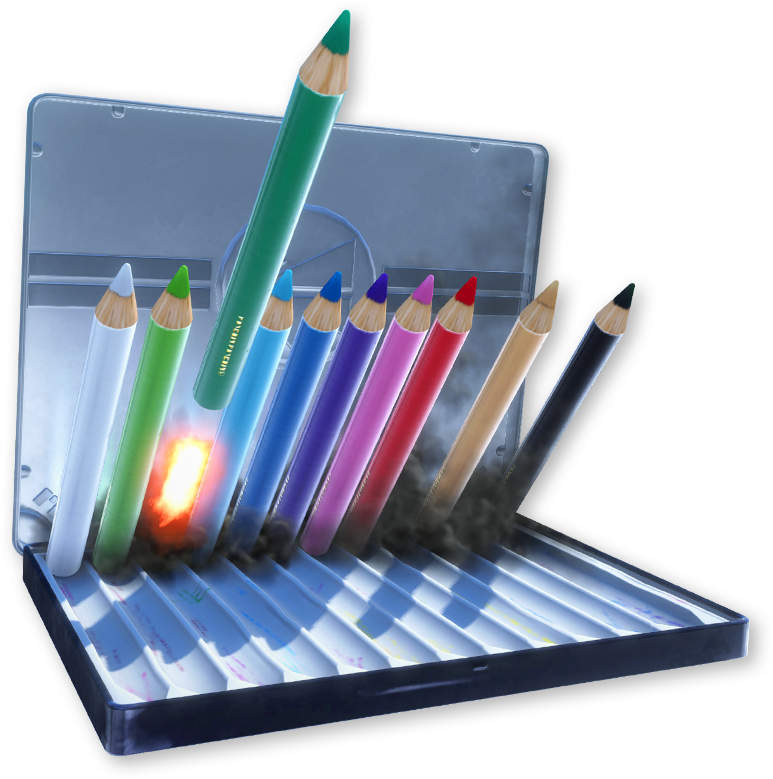 Another neat secret lies in the name of the first boss, Coloured Pencils. In the English version, its name is already a bit of a mouthfull. I mean, Jean-Pierre Coloured Pencils the 12th? Really?

No wonder Olivia shortens it to Coloured Pencils!

Yet that’s nothing compared to the French one. No, in France his name is insane. It’s…

Talk about one hell of a drawn out name!

Next on the list, a small boss tell many people missed out. Basically, you know that Handaconda boss you fight in Bowser’s Castle? The one you defeat by playing Rock Paper Scissors?

Well despite what a few speedrunning sites and videos say, it’s not just luck. No, the boss telegraphs its moves quite blatantly before your turn.

For instance, if it uses this expression it’s going to choose Rock: 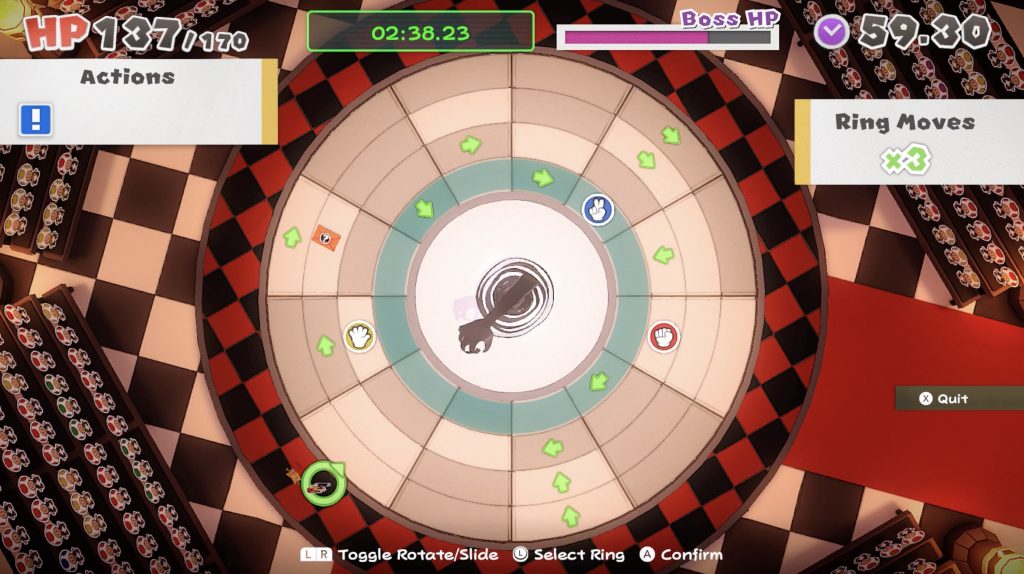 If it uses this one it’ll use Paper: 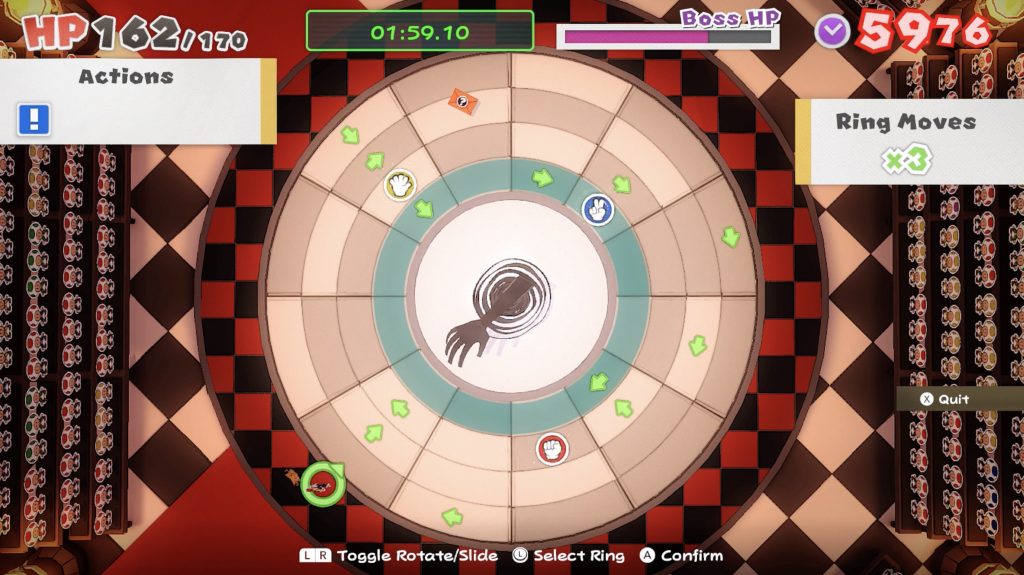 And if it uses this expression it’ll choose Scissors: 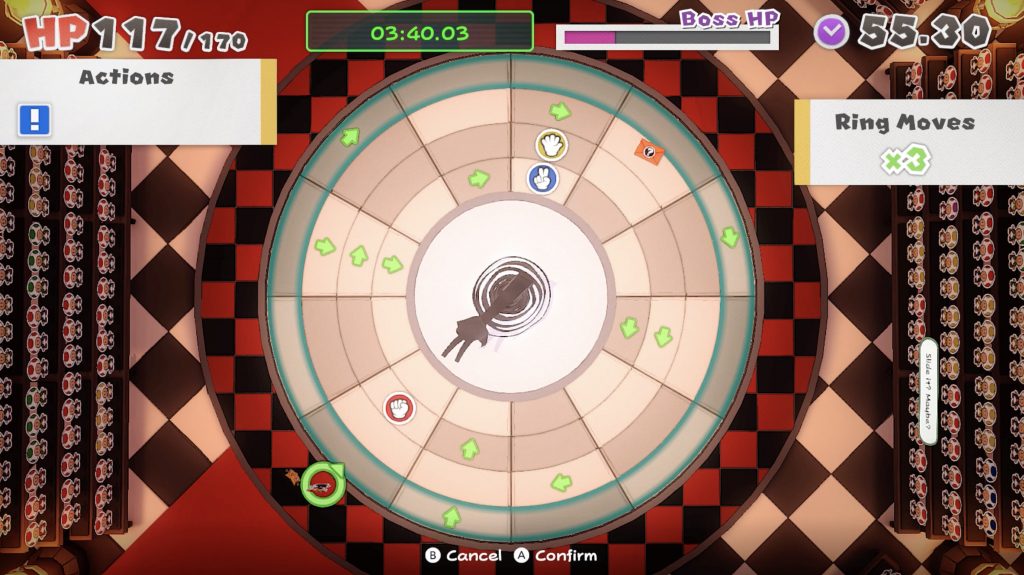 Admittedly, they’re not perfect. Just like how the boss changes its visible expression if you wait too long to arrange the rings, it’ll also change them if you take too long moving around the ring too. So like with the Scissors boss, you’ll have to be quite quick here.

But it’s a tell you need to remember for boss speedruns nonetheless. Don’t forget it, okay?

There’s also a secret you might not know about a certain accessory too.

Basically, you know that Petal Bag accessory you can get in Shogun Studios? That one which seemingly just replaces your confetti with petals and nothing else? The one you almost certainly didn’t keep equipped for most of the game? 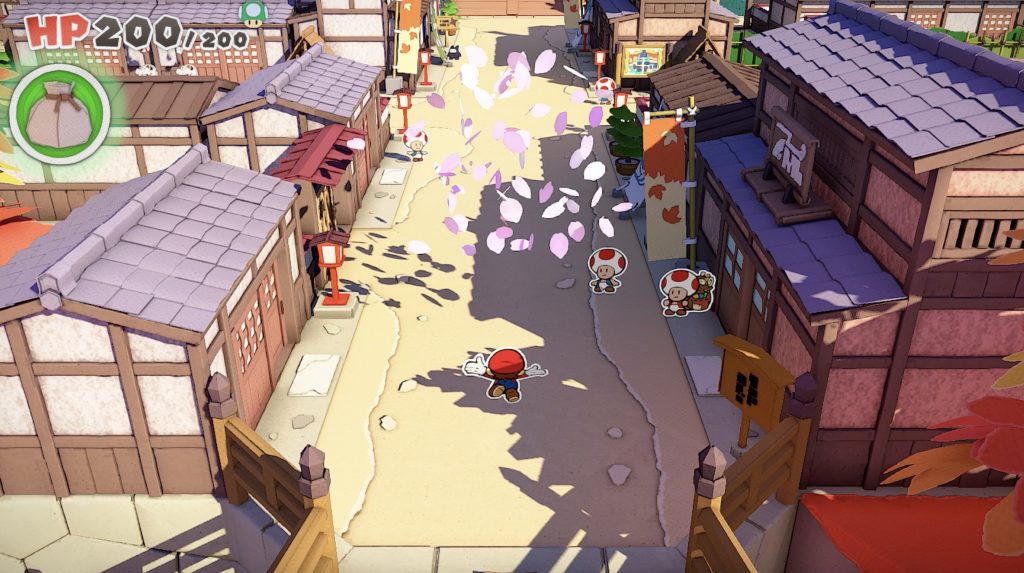 No, it also gives you more money too. 30% more money to be precise. This means it’s always worth your while to wear it while filling in those ‘not so bottomless holes’ littered throughout the landscape.

So remember to do that, okay? Otherwise, you really are leaving money on the table here! 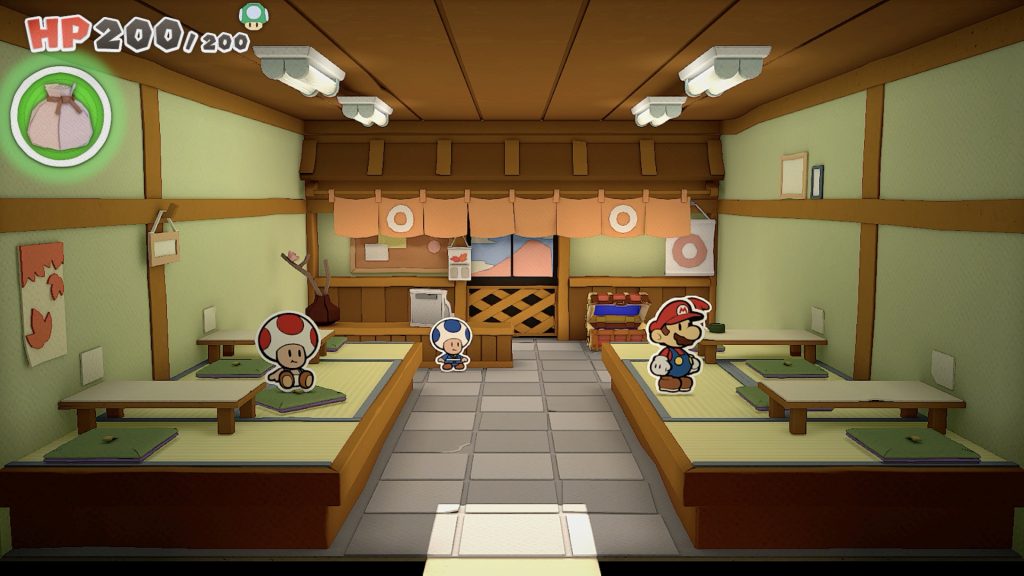 Audio references aren’t super rare in Paper Mario: The Origami King either. After all, Captain T Ode’s theme is literally the Fortune Island theme from Color Splash, and the the music player accessory replaces Mario’s sound effects with ones from the original Donkey Kong.

However, did you know there’s a more subtle one in Shogun Studios? One most players will completely miss out on?

Yep, the Tranquil Pipes Teahouse has a very familiar song playing in the background. Here it is normally…

And here it is sped up.

Hope so, since it’s the Maple Treeway theme from Mario Kart Wii! Talk about an unexpected song to remix here!

Finally, did you know that 100% completion in Paper Mario: The Origami King is actually no such thing?

Yep, as it turns out, fully completing the game requires more than just getting trophies or rescuing Toads.

No, it also requires beating two unmarked, extra difficult challenges too. These challenges?

Not getting a single game over throughout the entire game, and not equipping any battle accessories. It’s harder than it sounds, especially given how much those accessories reduce the damage taken/add time to the timer/increase your health in battle.

By doing this however, you get a congratulatory message in game: 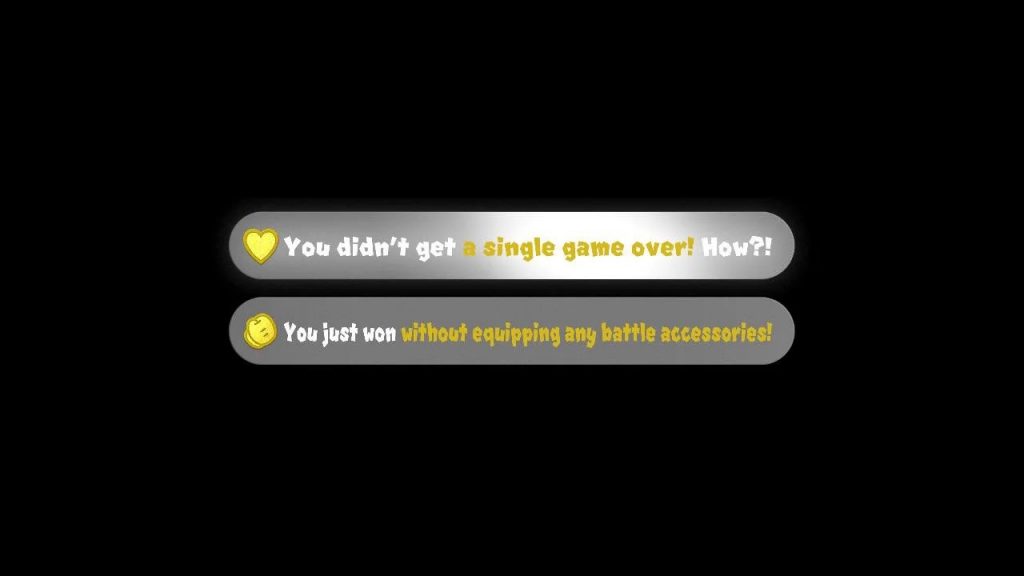 Plus some extra banners in the ending image:

And even some new icons on the file select screen. It’s a pretty well hidden secret, and one that’s fortunately doesn’t count towards the secret ending… 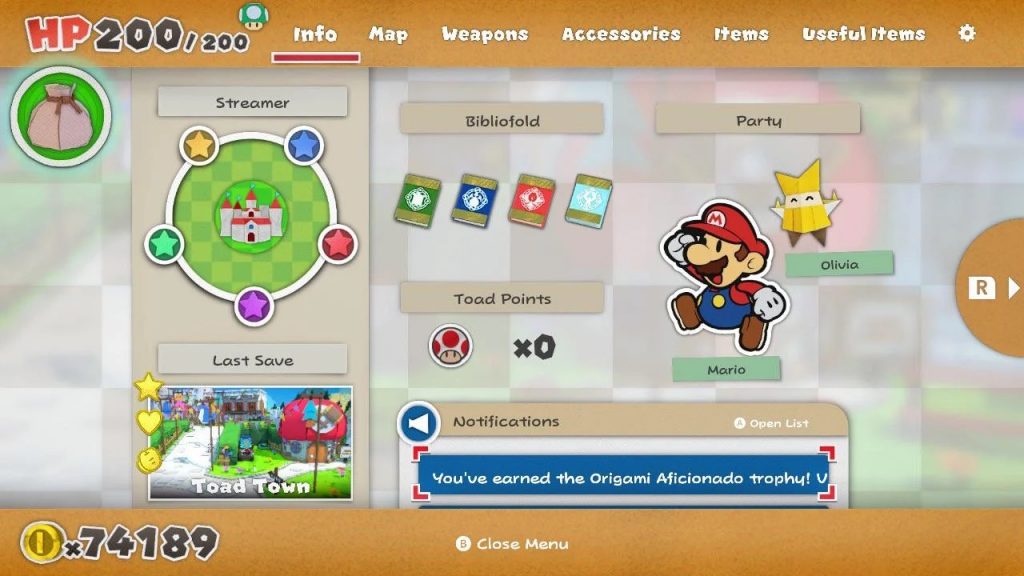 But it does mean completionists will have to do the whole thing over nonetheless. Like the actual Completionist, who sounds like he’s about to throw the Switch out of a window becaude of it:

So yeah, watch out folks. If you want true 100% completion, you’ll need to avoid game overs and equipping battle accessories too!

Still, that’s our list. Hope you learned a few interesting things from it, and I hope it helps you appreciate Paper Mario: The Origami King just that bit more.

If you liked it, or want to say more about the items included, leave your thoughts in the comments below or on the Gaming Latest forums today!