The SNES Was Supposed to be Backwards Compatible? 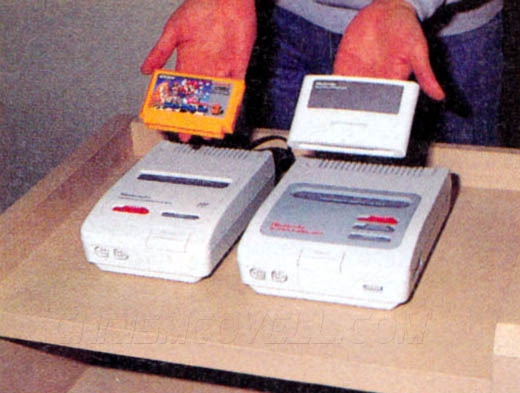 Well, this is an interesting bit of development history, isn’t it?  Apparently the SNES was meant to be backwards compatible with original NES titles at one point, hence the similarities between the NES and SNES processors (the latter used a 5A22 processor, which was also based on the 6502 chip the NES used).  Unfortunately, cost reasons (aka it would have increased the system’s price by a significant amount) put an end to the idea.

What’s more, it apparently doesn’t end there either.  Nope, the system was also meant to have an add on called the Famicom Adaptor (presumably the NES Adaptor outside of Japan).  This was basically a stripped down, slightly simplified version of the old console and its hardware that would plug in to the SNES to play the classic eight bit games.

Above: An apparent early demonstration of the adaptor.  As you can tell, the device itself was pretty large and bulky.

Either way, it wasn’t ever released, so the SNES ended up not being backwards compatible with NES games.  Still, it makes for an interesting story, doesn’t it?  The possibility of a universe where the SNES could play games like Super Mario Bros 1-3, Zelda 1 and 2 and the original Kid Icarus and Metroid games is certainly one that I’d like to live in.  Just a shame that tough financial realities ended up getting in the way…