Do you ever feel like Nintendo can’t catch a break?

First they get bashed by pretty much the entirety of the gaming industry.  Then the criticism catches up with reality and knocks out the Wii U before it can even remotely close to being succesful.  And now… the shipment of Splatoon games meant for the UK get nicked. 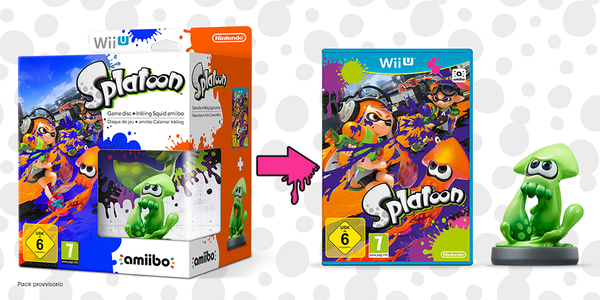 Above: If you were getting one of these special edition copies, it’s now gone for good.

Literally.  The lorry carring special editions of Splatoon (as well as Splatoon related Amiibos) has been stolen.  As a result, anyone who’s pre ordered the special edition version with Squid Amiibo is now without their special edition game and will have to make do with the standard copy and a standard Splatoon Amiibo.  As per Nintendo UK’s official statement on the matter:

We can confirm that the lorry transporting the Splatoon stock from Nintendo’s European warehouse to GAME UK has been stolen. Included as part of this delivery was GAME’s allocation of the Splatoon + Squid Inkling amiibo and as a result we are unable to honour pre-orders for this item in GAME. We are working with GAME to contact those customers affected. Whilst these unfortunate circumstances were out of Nintendo UK and GAME’s control, we apologise for any inconvenience or disappointment that this has caused.

And here’s what GAME said on the matter, with details about how they’re replacing the lost pre orders:

We regret to inform you that the lorry transporting the Splatoon stock from Nintendo’s European warehouse to GAME UK has been stolen. Included in this delivery was our allocation of the Splatoon + Squid Inkling amiibo. As a result, we are unable to honour your original pre-order due for delivery on the 29th May 2015.

Due to these extraordinary circumstances, we will unfortunately not be getting replacements for these missing items. We have no option but to substitute the Splatoon + Squid Inkling in your order with the standard version of the game. You will still receive your Inkling Girl and Inkling Boy amiibo. We will be discounting this edition by £10 from £52.99 to £42.99 to apologise for this inconvenience. We will also be sending your order by First Class post on Friday 29th May, as we want to make sure that you are happy with this substitution.

If you wish to cancel your complete order, or cancel your Splatoon game order and place an order for just the Inkling Girl or Boy amiibo (priced £14.99 each), please contact customer services on 0208 827 0099 or email us at customer.services@game.co.uk by midday Friday. If you wish to accept this substitution you do not need to contact us.

It’s a nice attempt to make up for the loss, but… it’s not quite the same.  The exclusive Amiibo is gone, the fancy box art is gone.  You get a nice enough discount, but it’s still a pretty big loss.

So what do you think?  Are you one of the people in the UK who’s now lost their Splatoon pre order and exclusive Amiibo?