The Koopalings are in Mario Kart 8! 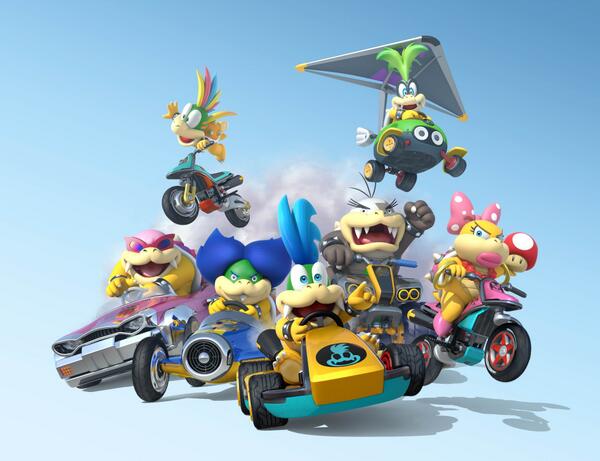 Long overdue given how many games the characters have been in since their return in Mario & Luigi Superstar Saga, but it’s good news regardless. Basically, the Koopalings (the fan favourite characters that were widely considered Bowser’s kids) are now playable characters in Mario Kart 8.

Yes, all seven of them.  So if you want to tear up the track as Lemmy Koopa, put other racers through hell as Roy Koopa or just find Ludwig von Koopa an awesome playable character prospect… well now you can.  Keep reading past the jump to see the first trailer, as well as some official artwork!

Here’s the trailer with them:

And it again at Nintendo’s original quality:

As well as the first ever official art showing them in a Mario Kart game:

So Koopaling fans, rejoice!  You’re now able to tear up the race track with your favourite characters, and see how Bowser’s kids will do against the racing skills of other Mario fan favourites.

Are you happy the Koopalings are in the game?

This is not “good news”. What a waste of seven whole roster spots. These characters are worthless and I’m glad they were replaced by Bowser Jr, and sad that they came back. Miyamoto even said recently that they aren’t Bowser’s kids anymore, but I ignored that because if they exist they might as well add something to canon, and my distaste for his meddling outranks my dislike of the Koopalings.

Just because YOU don’t like them doesn’t mean the Koopalings don’t have enough fans to justify having them put in. The Koopalings have been prominent characters in several classic and newer Mario titles. Not only that, but PLENTY of people love the Koopalings, many of them far more than Bowser Jr. Main point being, your OPINION IS NOT FACT. Just because you don’t like the news of these characters being added doesn’t factually make it “bad news” or a “waste of roster spots”. You have absolutely no idea how many fans would be happy to finally play as their favorite… Read more »

Please, tell me how happy you’ll be when you see the end-game roster and see most of the spots taken by Koopalings. Hey, why not call it Koopa Kart 8? If they don’t cut anyone we’ll have Bowser, Dry Bowser, Koopa, Dry Bones, Baby Bowser and all 7 Koopalings!

Hey, last time we got new characters, they were actually pretty lame and forgettable characters, and then a reskin. Wiggler? Honey Queen? Metal Mario?? Seriously? We REALLY don’t need them. Besides, we have 17 of the 24 characters from Mario Kart Wii CONFIRMED for return. With that, the roster is at the same size as Mario Kart Wii, and that’s only confirmed characters. They’re certainly going to have others to unlock that haven’t been revealed. Here’s the list of unconfirmed from both MK Wii and MK7: Dry Bones, Birdo, Diddy Kong, Bowser Jr., King Boo, Funky Kong, Dry Bowser (for… Read more »

I’m so down. Looking forward to Ludwig, Lemmy, Iggy and Roy. though would love Dry Bones or Para Koopa…

Would’ve really liked to see Bowser Jr here. Maybe Fawful or Dimentio too. If only…