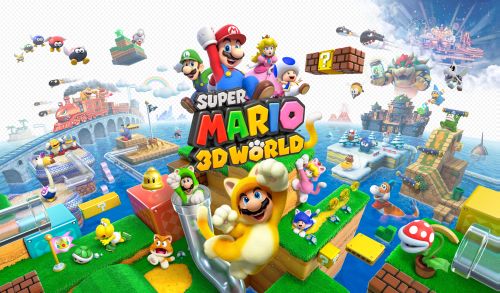 First of all, the music. The interviewer asks whether any Super Mario World music will be included, and here’s Mahito Yokota’s response:

Sadly, there isn’t any remixed music from Super Mario World. However, this is a game where you take control of four characters, each with different abilities. Does that remind you of Mario 2 at all? You might just find some musical rearrangements from that game here.

Moving on, we also get to hear whether the composers liked cats more after this game.   Their answers?  No they didn’t.  They like cats, but they prefer dogs.  In their own words:

Mahito Yokota: I like dogs! I had to run Cat Mario around a lot during development, but I don’t think that changed my opinion at all!

Glad to see another dog fan out there, cats are way too overrepresented on these here internets.  Probably because they remind many internet users of their own introvert tendencies.

Finally, something else I picked up during my read of their article.  Notice anything interesting in this ‘differences between Mario Galaxy and 3D World’ quote?

With this game, too, there are naturally a lot of tracks performed live. The game chiefly takes place on terra firma, so there isn’t the majestic or floaty feel of the Mario Galaxy series; instead, the music has a more rhythmic atmosphere, something you’ll want to dance to

Note how he says ‘chiefly’.  That doesn’t mean it entirely takes place on  the ground, just that it’s terra firma based for the most part.

Perhaps the ‘most part’ refers to the rumoured Mario Galaxy content included here?  After all, we did see the Comet Observatory in the official artwork and some stamps looking like Rosalina have been spotted in other pictures.  Maybe some levels will take place in outer space and have more Galaxy like soundtracks to go with that?

Sure it’s a real stretch, but anything’s possible here.

Are you looking forward to Mario 3D World and its music?  Would you want to see remixes of Super Mario Bros 2 songs in this game’s soundtrack?