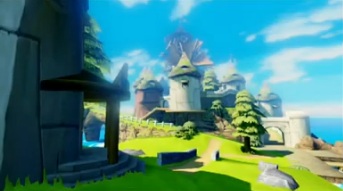 From a recent press release issued by them:

What’s on your wishlist for the new Wii U Zelda game?

With a brand new remake of The Legend of Zelda: Wind Waker on the way to the Wii U console, speculation has been mounting over what the reinvented game will be like.

Nintendo developer Shigeru Miyamoto, who’s had a hand in the development of many popular Nintendo games with the exception of the Professor Layton series, has offered a few hints as to what we can expect from the new Wind Waker when it finally arrives. He told the ABC news network that HD capabilities of the Wii U will be able to “breathe new life” into the game, and also hinted that the game will have upgraded graphics, along with enhance lighting, better cel shading and overall, a more dynamic and vibrant look.

As it is being developed specifically for the Wii U console, the way the new Zelda: Wind Waker title is played will also be different from its Nintendo GameCube original. Similarly to the New Super Mario Bros. U title, Wind Waker players will have the option to play entirely on the Wii U GamePad. There will also be integration with the Wii U’s Miiverse, similarly to other games released for the console.

This is what we know about the new Legend of Zelda: Wind Waker game so far, but as for more detailed specs and features, we’re still completely in the dark. So, the question is – what would you like to see in the new Wind Waker? What would be on your wish list if you could have a hand in designing the game?

A number of game fans and pundits have a few suggestions, such as the following:

These are just a  few of the things Zelda fans would like to see in the brand new Wind Waker, but what improvements would be at the top of your list?

Personally, I’d like to send Nintendo over to this article:

That illustrates every single thing I want to see in The Legend of Zelda The Wind Waker HD.  And with the exception of the difficulty level change thing mentioned, Nintendo seems to have considered everything on my wishlist.

So yes, Nintendo needs to implement every single thing mentioned in their own press release.