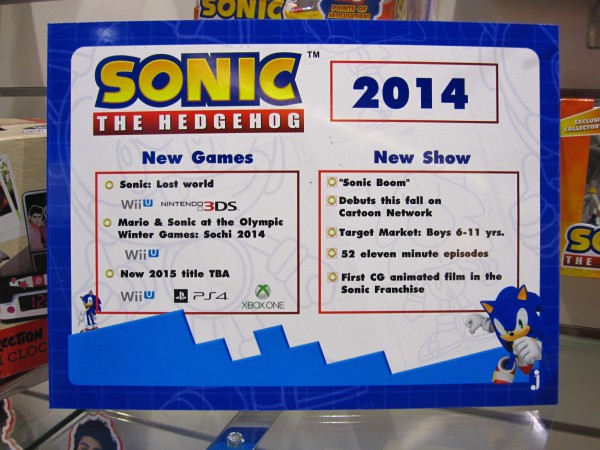 That’s according to this poster at the Nuremberg Toy Fair anyway, which lists the game alongside existing ones like Sonic Lost World and Mario and Sonic at the Sochi 2014 Winter Olympic Games as coming in the near future.

It’s also multiplatform.  So in other words, it’s coming to the Wii U, PS4 and Xbox One.  Keep reading to see the evidence for yourself and some other random thoughts on this matter! 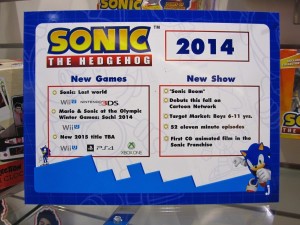 There’s the poster.  As you can see, it mentions the games, their platforms and other Sonic media like the new TV show that’s apparently coming soon.

It also doesn’t mention the so called ‘third Nintendo exclusive Sonic game’ either, which makes me suspect that Sega’s exclusivity deal with Nintendo has gone away for whatever reason and that this mystery new game became a multiplatform one to deal with the low sales of the Wii U at the moment.

So what do you think?  Excited for the new Sonic game?  Think it’ll be some next generation masterpiece given the three platforms it’s being released on?  Is it the so called ‘exclusive’ having lost its exclusivity deal? Post your thoughts in the comments below or at Nintendo 3DS Community.com today!

I really liked the eShop demo of Sonic Lost World, so I hope I like this “new” Sonic game.

Great. I guess the Sonic Boom redesigns will not be in the 2015 Sonic game and the current voice actors will continue until 2018. I want a current Sonic to stay in the current design.

I hope the next game has what Sonic Lost World was missing: A good sense of speed that isn’t uncontrollable, and the level design for a few of the levels felt like a Mario game which doesn’t offer enough of the platform to run fast. It should feel like a mix between the Adventure series and Unleashed/Colors/Generations style of gameplay.

SEGA confirmed that this rumor was false. I’m going to assume the Nintendo-Sega exclusive games thing is still going on and they’re going to reveal their third game sometime soon. Hopefully, this year.