Microsoft trying to advertise Xbox One at Best Buy Wii U Events? 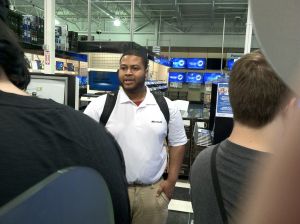 Wow, talk about ‘desperate’ Microsoft, they’re apparently bothering people in Best Buy stores and asking them why they’d buy a Wii U when the Xbox One is round the corner.

No, this isn’t a joke.  Microsoft employees are seriously bugging customers interested in the Wii U and trying to push the Xbox One on them, as mentioned in reports.  Here’s a screenshot showing a Microsoft employee in Best Buy trying to annoy Wii U demoers:

Above: A desperate Microsoft guy trying to talk about the One at Best Buy…

So yeah, what do you think about this?  Are you a bit disappointed that Microsoft is acting like this and is being so desperate?

This was true at the Schaumburg event as well. There were two Microsoft reps, one in a white Microsoft shirt (with the new logo), the other not in a uniform. They were talking to people about the event, why they’re excited about Wii U, etc., and taking notes – the uniformed guy on his Surface, and the non-uniformed guy seemed to be typing up stuff on his Windows Phone. And when I say taking notes, I mean there was a document up on the Surface titled something like “Nintendo E3 Experience at Best Buy” and there were paragraphs being typed.