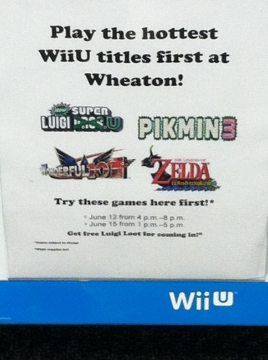 And be warned, it’s not exactly the most thrilling list of games on the planet.  Interested?  Here’s a rumoured image showing them: 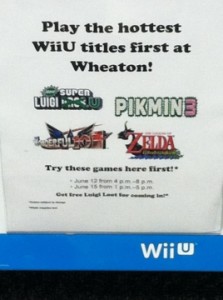 If you can’t see the image, the list is supposedly:

No 3D Mario or Mario Kart (despite both likely being out before the year’s over), no Game & Wario, no Smash Bros, no Zelda (well, no new Zelda game)… It’s pretty much the worst case scenario bar Pikmin 3.

Still, at least it’s only a rumour so far.  Maybe it’ll turn out this is fake and that Smash Bros and the new 3D Mario game will be shown off at Best Buy as Wii U demos after all.  Or that this isn’t a full list and that another four or five games will be confirmed shortly after E3.

So what do you think of this rumoured list of Best Buy Wii U demos?

That list actually doesn’t look bad, I’m really excited to check out wind waker HD and Pikmin 3. But I think it would have been better if they had just made these demos playable from the nintendo eshop for wii u owners, since there is only 1 bestbuy location in Oregon that has demos.

It’s not bad in the sense the games are bad (they’re not), just that they’re not the most exciting choices ever for games to demo.

And it would definitely have been better if these demos were on the Nintendo eShop. It’d allow people not from the US to actually experience them for one thing.