Yes, it’s finally happened!  Someone has reached the final boss in Hyrule Warriors, and put a video of it online way before even the Japanese release date, no doubt displeasing someone at Nintendo in the process.  So if you want to see just what the final boss battle is like, as well as the level including it, click the read more link below and keep reading!

Just be warned… there are going to be spoilers. You know, cause it’s the final boss battle and all…

So what happens?  Who’s the final boss?  Well, you’ll never have guessed this, but it turns out to be…

Yeah.  Nobody ever saw that coming, right? 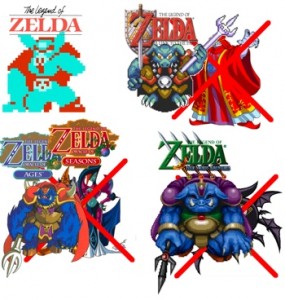 Above: It’s happened quite a lot before.

And it plays out just as you’d expect.  Fight Ganondorf the long haired swordman/magician guy, then fight his ‘not at all seen in every other Zelda final boss battle’ form of Ganon.  Hooray?

The level itself isn’t much to speak of.  Stalchildren, Beamos, Stalfos, Argarok and Lizalfos make up all the enemies, and while they’re definitely a group you’d never expect to see together in a final battle, they’re not particularly interesting to battle.

So yes.  Hyrule Warriors has Ganon as the final boss, and a weak final level in general.  Bit disappointing to be honest.

When’s the Japanese release that someone not only already got, but beat the main story… -_-‘