Unless of course… you’re willing to pay GameStop a ridiculous price.  Behold, the Gamecube controller adapter on GameStop’s site: 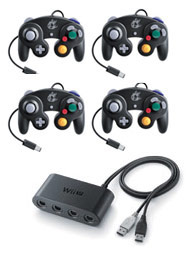 Note anything unusual?  Yep, you can only buy it with a full set of four controllers, and only for an almost insane price of 140 dollars!  Talk about the company wanting to squeeze every penny out of their customer base!

So yeah.  Want to play Smash Bros for Wii U with a Gamecube controller or two?  Better have a ton of money left aside to spend on a bunch of unnecessary controllers and what not on GameStop’s website.

Why do you always put question marks at the end of your article titles?

Quite a few writing guides (aka SEO/marketing for online articles) say that having a question mark at the end causes more reader engagement.

Okay haha just wondering. It makes it sound unsure to me but I guess it’s an actual thing! Now I know 🙂