Including a pretty nice level list that has about half the game’s stage names in it (plus a ton of graphics showing all manner of late game content.  So if you want to see all this for yourself, keep on reading…

But now though, the really neat bit.  New screenshots! 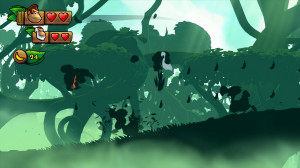 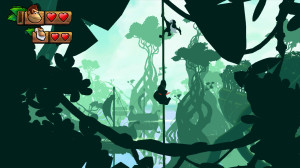 Like these ones showing some of this game’s silhouette stages.  Didn’t think they looked absolutely beautiful before?  Well, you will now.  That second screenshot has to be one of the coolest things I’ve ever seen in a video game style wise. 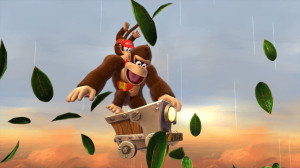 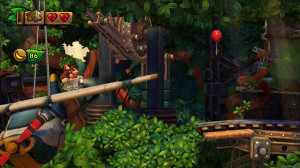 Riding through the jungle trees in a mine cart.  Pretty sure this was seen in the first trailer for the game, or maybe one of the demos. 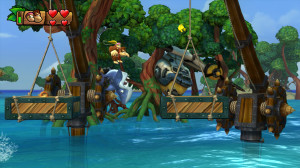 DK very narrowly dodges a shark in this ocean level.  Why does everything want to kill him again? 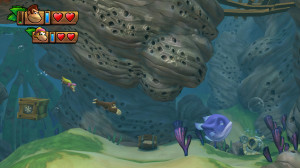 Swimming through the ocean waters.  Not sure about the fish design though, seems a bit goofy and cartoony for the otherwise more ‘realistic’ Donkey Kong Country series. 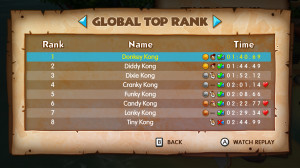 This game apparently has online leaderboards for level times. At least, according to the Destructoid article I’ll be linking to later in the post. 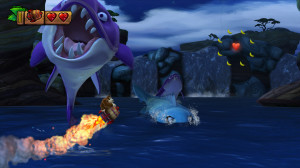 Dodging even bigger sharks on a rocket barrel.  Hang on a minute, is that second shark driving a boat?  Bloody heck, the wildlife in the DK Island chain is a little… futuristic. 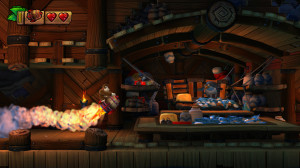 DK rides through what looks to be a toy factory or workshop on a rocket barrel.  Hmm, reminds me an awful lot of Donkey Kong Country 3 with all these North European level aesthetics. 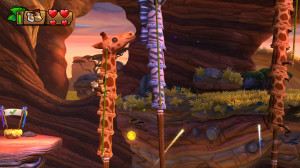 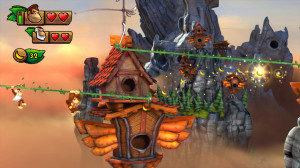 More of the canyon level.  I’m not sure how to describe the look of this area, but damn does it look amazing. 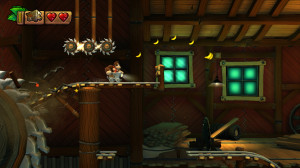 Inside a wood carving mill or something.  Yeah, they’re definitely taking design inspiration from Donkey Kong Country 3 with all these rustic areas. 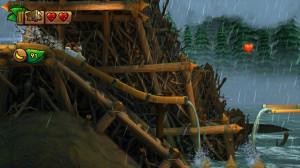 Mine cart riding down an aquaduct in what appears to be another mill. Love the visual style here, very Northern Kremisphere like. 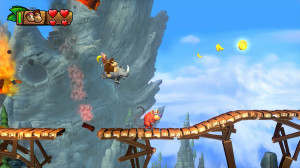 Rambi!  Animal Buddies are confirmed to return, with Rambi being one of them. 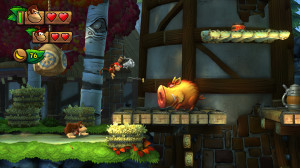 DK vs fire breathing pigs.  Design reminds me a tiny bit of those cannon pigs from Super Mario Land 2. 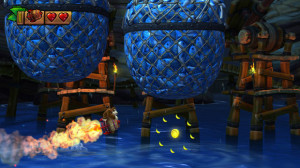 Yet another rocket barrel level.  Oh how fitting that the game which took inspiration from Donkey Kong Country 3 would overly utilise its most annoying gimmick. 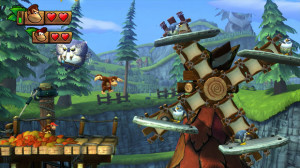 A windmill in another overly European style stage.  Can’t wait to see it in action. 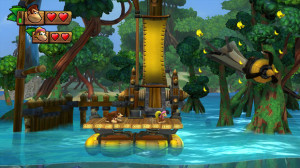 Riding a raft through a dangerous swamp like area. 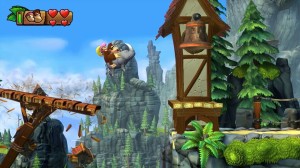 Rambi in what appears to be a mountaintop village area.  Gee, I wonder if that bell is about to get shattered… 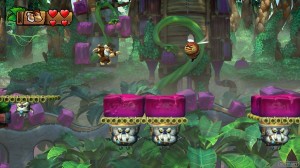 Jelly Jungle lives up to its name. 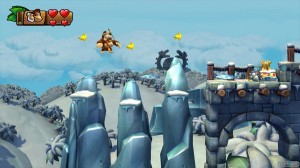 The frozen Donkey Kong Island looks nice, albeit far more treacherous than usual.  On another note, why are the Vikings/Snowmads freezing the place again?  If they already come from a cold climate, and want to turn other places into a copy of their own, why not just stay home? 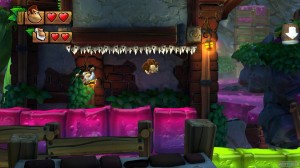 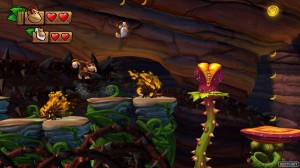 Man eating plants return, because every game with any kind of jungle theme absolutely needs them nowadays. 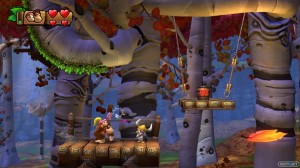 Exploring even more of the forest stages. 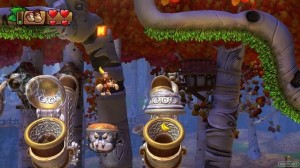 Blasting between what appear to be cannon like bells.  With the world’s meanest creature (probably a spider) in the middle. 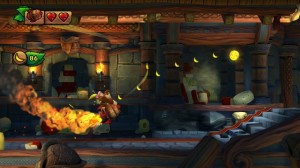 Rocketing through more of the mill/factory.  Again, this seems exactly like something Donkey Kong Country 3 would do, if that game bothered to use rocket barrels outside of Rocket Rush. 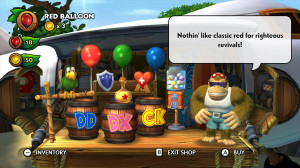 Funky Kong’s shop, looking as cool as ever.  Pity that Squawks is still just an assist item rather than a proper animal buddy though.  Would have preferred this game to give him his role from Donkey Kong Country 2 instead.

But enough with the screenshots, here’s some other cool stuff.  Like Destructoid’s preview of the game:

Some interesting points here include…

There’s apparently no Super Guide at all.  They just completely ripped it out the game.  Hurray for common sense prevailing and the ‘everybody wins’ culture of the modern era being finally nipped in the bud.

the blue balloon that helps you breathe underwater for longer.

As well as a new item which lets you breathe underwater for longer.  Makes me wonder why they don’t just remove the air meter altogether.  That was how it worked in the original trilogy.

Another cool addition is a capsule machine that drops out a capsule for a few coins. Each capsule unlocks figurines that you can rotate and view in your Extras menu, including the cast of characters and enemies like the commonly-seen “Tuff Tucks” — tossable penguins with cute little helmets.

So the game has its own trophy system like Super Smash Bros?  That sounds freaking awsome, especially if we get to learn more about the enemies and characters from it. Or if we get some based off old school characters not returning here (like K Rool).

there will be online leaderboards that are dedicated to speed-running levels, as well as a single-player Hard mode that unlocks after you beat the main game at least once.

This sounds pretty good.  Hard Mode is probably going to be both required for 100% completion and utterly brutal, which is always a fun combination.

he musical scores of each level created by veteran David Wise are wonderful, with a great new standout found in level 2-1. The tune is “Windmill Hills,” and it evoked the mood of the theme song to Cheers, with a bit of a folksy country vibe. The wonderful score to the underwater levels is back and revamped, and I wished I could listen to it more at the event as I heard it over the sound of other journalists playing on other systems.

In other words, Aquatic Ambience is probably getting a remix, and Windmill Hills will have some awesome folk/country style music.  Neato.

They also get more dangerous as you take them down, switching up their attacks in intelligently designed ways that keep you guessing at how to properly end them. One of the bosses actually made me think of boss levels in shoot-’em-ups that require you to avoid incessant enemy fire and find brief safe spots before implementing your attack.

The bosses are difficult and change their attack patterns when spamming different moves?  Cool, Donkey Kong Country has always needed some better bosses to fight.  Here’s hoping they take some inspiration from Luigi’s Mansion Dark Moon (the king of ‘bosses that mix up their attack patterns) and Wario Land Shake It (for the hard as hell later boss patterns) for this one.

And that’s that for the new information from the article.  Sounds good, doesn’t it?

Finally, have some great videos of levels.  First up, a mine cart stage:

Heh, I love DK’s screams of pain and utter panic in the above video.  His reaction when he falls is absolutely priceless.

And here’s Sawmill Thrill.  Thrill is right, the level is absolutely jam packed with variety and utter epicness.  Like how you end up in a carved out log, go shooting down a log flute and end up skipping across the lake outside for a while. Or the giant saw blade chasing you and sending bits of the ledge flying in front of you as obstacles.  Damn, that’s one intense mine cart stage!

Finally, the game is doing something even I would never expect.  Trending on Twitter in the UK:

No, I’m not kidding. A Nintendo game is popular in the UK. Still, given that Rare was/is a UK based company, and how there’s a certain level of fondness for their work over here, I wouldn’t be surprised if nostalgia for the SNES era games had a certain amount to do with it. I mean, the magazines practically worshipped the company back then, with Donkey Kong Country 2 actually getting the highest score of all time in at least on gaming magazine. So there’s probably a certain amount of excitement coming from another awesome game with the same soundtrack composer and even more fantastic looking levels.

Well, that’s it for Donkey Kong Country Tropical Freeze information and media.  Hope you enjoyed the glimpse at all the amazing levels and content the game has to offer, because damn, it really does make you want to buy it when it’s released this February.