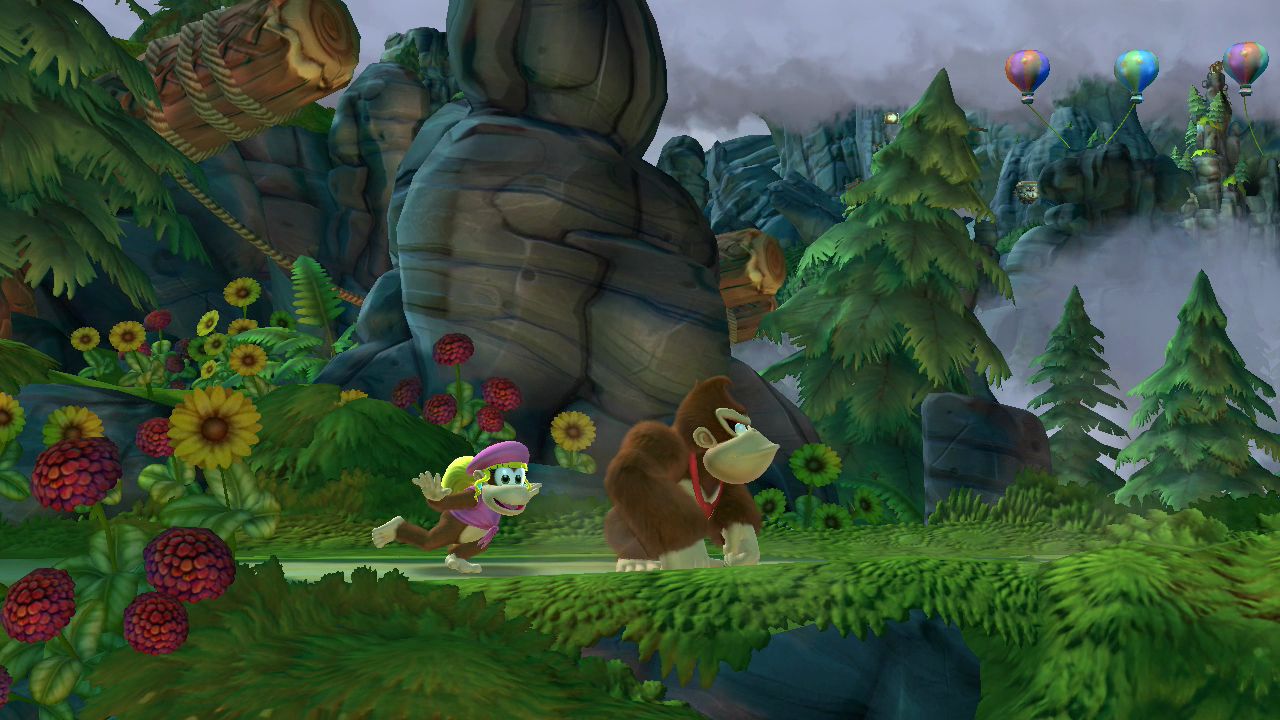 Just earlier today, a video game site called US Gamer interviewed Kensuke Tanabe and Michael Kelbaugh of Retro Studios about Donkey Kong Country Tropical Freeze.  And unlike various other interviews with Nintendo execs in recent days, this one gives away quite a bit about the game and its development, including some clues as far as who the fourth playable character is!  So here’s some important stuff from the interview, as well as my thoughts on each comment…

USG: Speaking of legacy, how much involvement have you had with the previous Donkey Kong games, each of you?

MK: Well, I’ve been with Nintendo for 25 years. I worked on DKC, DKC2, DKC3, DK Land… I worked on every DK title. But by “worked on,” I mean that I did a lot of different things. I managed the testing department, the localization department, the evaluation department. Compared to the development side, I was more on the support side for those. I’ve been involved in development for many DK titles at different levels. Working on it here at Retro has been very…sentimental for me. Especially working on it with Tanabe-san and Risa-san, because Tanabe-san worked on it… Not to this degree, but back in the ’80s and ’90s, we worked together on it as well. Being able to bring it back to Retro and work on it again was a real special experience.

So in case you can’t remember the last time this guy discussed his past with the series, he did indeed work on the SNES games in some fashion (seemingly in the testing and localisation departments).  As for Tanabe…

KT: For me, my first experience was working on localization of English to Japanese on the Rare titles. I actually went to Rare’s studio and worked there. One thing that surprised me is that their studio is basically a set of refurbished, reconstructed stables. They’re barns. I was thinking, “Out here, this is where they’re making all these games?” I was a little surprised.

He was apparently involved in translating the SNES titles from English to Japanese. Interesting to know.  Wonder if he realised King K Rool and Kaptain K Rool were the same person (after that embarassing Smash Bros Brawl goof a while back)?

RT: First of all, as far as the single-player goes, as you mentioned earlier, you have Donkey Kong and then you have his buddy character. We have Diddy here, but we’ve also added Dixie as a partner character. In the multiplayer, player one is Donkey Kong and player two will be able to select between either Dixie or Diddy. Dixie, as far as her characteristics or features, they’re pretty much the same whether it’s single-player or multiplayer.

So Dixie Kong handles much the same in both single player and multiplayer.  Interesting to also know that the second player can actually select which of the Kongs they want to play as too, although I’ll be a bit disappointed if it turns out that player 1 is forced to use Donkey Kong throughout the entire single player game.

KT: We’re thinking that we’ll probably add one more character. So we’ll invite you to go ahead and take your best guess as to which Kong you think is going to join us.

Translator: There was Funky, Lanky, Candy… We’re going to find out. We’re Nintendo and we don’t know this? What the heck is wrong with us? Jeremy, you’re a game journalist, what’s going on.

KT: Well, since we can’t think of the name, you know it’s not that one. [more laughs]

So that pretty much counts out Kiddy Kong as the fourth playable character.  It is interesting to know that both interviewees knew of Lanky and Candy Kong though, especially given how neither has been particularly common in recent Donkey Kong titles.  Guess that this game might feature more Kongs that we first though…

Also, it seems like the character is likely to be a Kong.  So that might count out K Rool as player 4, as well as (thankfully) the Checkpoint Pig guy, Eddie the Mean Yeti or whatever other non Kong character you can possibly imagine.

USG: Are you able to say at all who the third character is now, or is that still a secret?

Sorry everyone, looks like Nintendo are gonna be keeping the final character’s identity secret for quite a while longer now.  Pity, I was curious to who this final individual was/is.

KT: So one of the things that we’ve done is, we’ve taken a feature from the 3DS version of Donkey Kong Country Returns, which is the green balloon. We brought it back in this version. It basically allows the player, as you know, to fall to what is normally a loss of life. The green balloon lifts them up and they can place themselves where they want and let go. It gives the power to use or not use it to the player, though. Basically, we’re just providing a system for players who want to use it if they want to. They can go purchase this item in-game and use it, but of course they don’t have to. It’s just giving those people a chance to get into the game a little easier and make it more accessible. You have the standard Donkey Kong challenge for our veteran players who are really into it, and we’ve got some aids that are available for people who maybe aren’t as used to the series that will allow them to have some of the same experiences as other players.

And so the Green Balloon item from Donkey Kong Country Returns 3D makes a second appearance in Tropical Freeze. When you add the bolded part (about more aids for less experience players) into the mix, that also seems to hint that the general ‘New Mode’ thing from Returns 3D might be here too, the one with the extra hearts, crash guard item and DK barrels you can take into levels.

It’s not much, but that’s some fairly interesting info about Tropical Freeze you’ve got there.  Kiddy Kong basically deconfirmed as player 4, the Donkey Kong Country Returns 3D items returning… and quite a bit more besides. So read the full article at US Gamer’s site via the link below, then comment back here and say what you think of this interview!