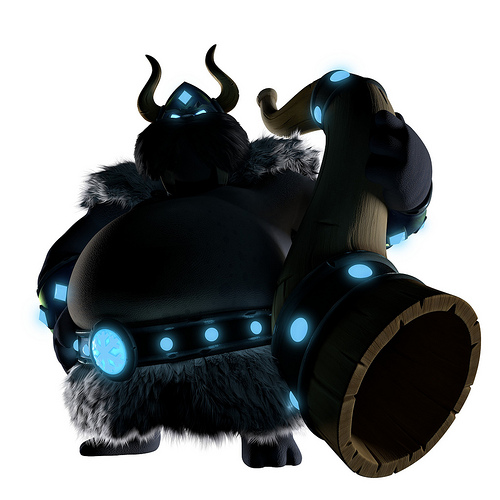 Because if you thought the stuff from Nintendo Direct looked awesome, you haven’t seen anything yet!  So here it is, some more interesting screenshots, information, artwork and videos showing Donkey Kong Country Tropical Freeze and all its fantastic gameplay!

First up, here’s the game intro:

As you can tell, the music is absolutely amazing throughout.  You’ve got a great remix of DK Island Swing playing as DK and crew celebrate his birthday in the treehouse, the menacing Snowmad leader’s theme that plays as he starts the attack… heck, you’ve even got a rather sweet ice/christmas like tune played right at the end!

There’s also some more footage of various levels, which can be seen here:

Absolutely stunning.  The graphics look amazing and capture the feel perfectly, the original tunes match everything on screen as well as they possibly could… there’s nothing more to be said.

We also have some artwork of the game: 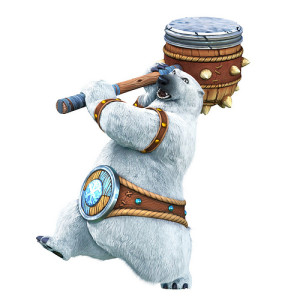 Here’s the awesome looking bear boss from the game.  The one who tries to kill the Kongs with a giant spiky mallet and who actually looks like he’s out of a nature documentary to boot. 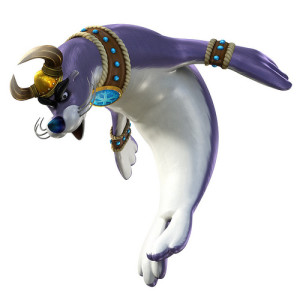 And here’s the seal you fight in world 1.  Looks pretty nifty. 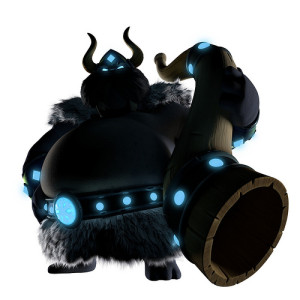 The Snowmad Leader, who looks unmistakenly like a Walrus.  Love the shadow effect though, the way it keeps his face hidden definitely makes him more imposing.

Next up, some screenshots.  Pretty good ones too… 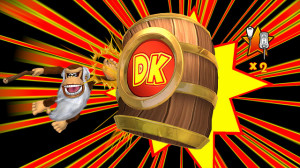 Cranky Kong ends a level in style by whacking the goal barrel with his fist. 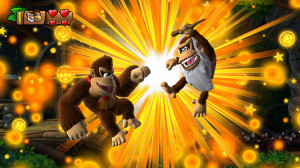 DK and Cranky team up for a Kong Pow attack! 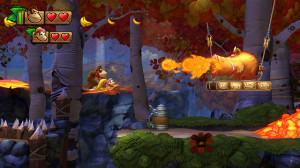 An autumn forest area, with a strange fire breathing pig like animal. 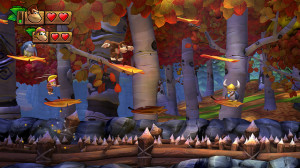 DK and Dixie navigate some spikes in the same area.  Jeez guys, of all the paths you COULD have taken, you took the most dangerous one? 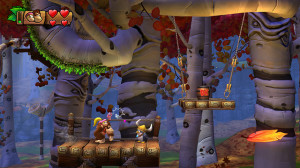 Yet more of the amazing looking autumn forest.  Oh hey, there’s grass you can cling to and climb to the top left of the screen! 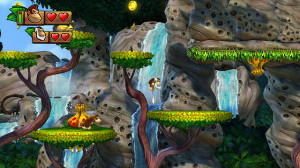 An area with tree tops, cliffs and waterfalls.  Good grief, this game has an absolute TON of beautiful looking locations, doesn’t it?  Damn, every level seems to have its own superbly detailed backdrop! 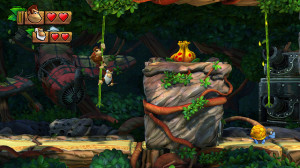 DK and Cranky climbing some vines in a jungle area.  Got to have vines in a Donkey Kong game, it’s the ‘law’. 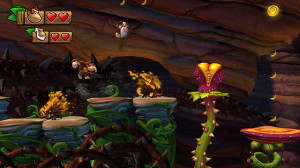 More of the bramble level. You can apparently defeat these man eating plants by bouncing on them with Cranky Kong’s cane, which is cool.

And now, some other stuff.  Game Explain does a preview of the game here:

Seems like the game remixes some Donkey Kong Country 2 music too, I swear that theme is familiar. Oh wait, it’s a remix of K Rool’s return theme!

Perhaps it’s hinting at the return of a familiar foe as a plot twist?

IGN also played Bramble Scramble and Jelly Jamboree, which can be seen below:

And GameExplain has more footage of the wildfire level, named ‘Scorch and Torch’:

As well as world names:

And if you're curious, the first 5 Worlds are called Lost Mangroves, Autumn Heights. Bright Savannah, Seabreeze Cove, and Juicy Jungle

And some other random info:

All in all, Donkey Kong Country Tropical Freeze is looking better and better. With great music, some really interesting level design and a cast of almost perfect characters, the game really does seem like it’ll be the best 2D platformer of the entire generation.

Game of the Year guaranteed?

Holy shit this news has me pumped for the game! I do really hope K. Rool turns up in the game somehow someway.