What Are Sony’s Plans For The PS4’s Future?

All three major console developers have back-and-forth attitude problems, but none seem to be more-so than Sony. Between constantly setting themselves up for class-act suits from breaking their own Terms of Service or always riding in the shadow of Microsoft, Sony is constantly making us wonder what they are thinking. Upon discussing some things with a close friend whom is also a gaming journalist we began noticing some things about Sony as of late. Let’s take a look at some of the most recent doings – or not-doings – and see if we can sort through any of it.

For starters, Sony finally added the ability to view video, audio, and images from your PC on your PS4 as of the 16th of last month. However, no word yet as to whether they will allow you to save, send, or store images, or even set them as your wallpaper on the console like the PS3 and Vita both allow. Oddly enough, however, if you send an image from the PS Vita to a user on the PS4 they can view it but not save it. The Vita, however, can do both. Also yet to be incorporated is notifications for when your friends come online. Again, this is a feature everything else uses so where is it?

Now, let’s go to the topic of ToS for a moment.  They may have saved their asses with many clauses in the ToS now, but will it help their fans’ faith in the company? If you recall the game by Konami ‘Silent Hills Playable Teaser’ (or simply P.T. for short) was taken off the PS Store. Interestingly enough, they sent out notices that ‘if you delete the game demo of P.T. you will be unable to re-download it’. Now, this is merely a demo for a game, but what does that say about Sony’s digital download distribution service? Kind of makes you question whether the risk is worth it to download digital installments rather than just purchase a physical hard copy of a game; especially when even demos are suddenly no longer re-downloadable from your purchase history, no? How would you feel if you downloaded a game like Final Fantasy 14, all the expansions they put out, paid the monthly membership fee, spent three years on the game, and then Sony said “We’re removing the digital copies from our library” shortly before an update forces you to uninstall the game and re-install only for you to find out you are unable to re-download and have to go out and purchase the actual disc – or worse a disc bundle for the expansions as well? 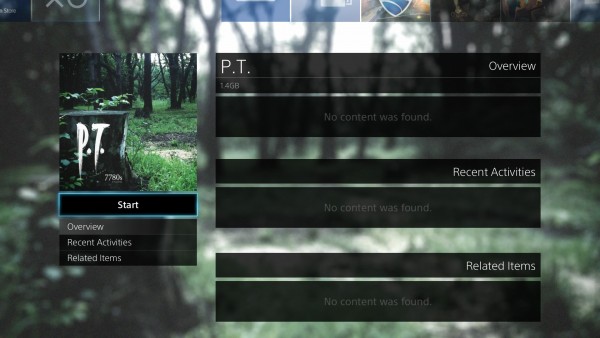 Above: P.T. as it appears on my PS4 now. Note how all additional information has been removed, even my friends’ activity with it.

Backward compatibility from PS3 to PS4 was ‘being looked into’ or ‘worked on’ said Sony since the release of the PS4. Microsoft’s E3 presentation showed they had emulated the 360 and got it to work natively on the Xbox One. Sony’s response to that? Cancelling their backward compatibility plans completely. Yep, good job, Sony! I’m sure giving up on something fans desperately want is the best solution when your competitor pulls it out ahead of you. Can’t see how that WOULDN’T be a good idea! Just another thing to roll your eyes at Sony for.

Sony’s PS4 tries to be Facebook with its social media style features like “People You May Know” or “Discover!” ad-like pop-ups. Oh, how I would love to disable these features! Sadly, much like Microsoft manages Skype and Outlook, you can’t. These things are stuck there taunting or popping up and all you can do is ignore them or be irritated by their presence. Another feature that you cannot do away with is the PS4’s automatic screen capture feature that takes and saves an image of your screen whenever a trophy is earned. In concept it sounds kind of nice at first; proof that you earned the trophy and an image that is saved and tacked onto the trophy when you check it, thus showing how and when it was earned with a picture of it being unlocked. However, that means every trophy unlocked takes up storage space on your HDD until you personally sift through every single image and remove all of the ones with little trophy icons near their name and date. Side note: if you are fast enough with hitting the PS-button on your controller at the time of the notification pop-up that occurs when you earn a trophy you can wind up with it taking a screenshot of your trophy list rather than your gameplay screen. 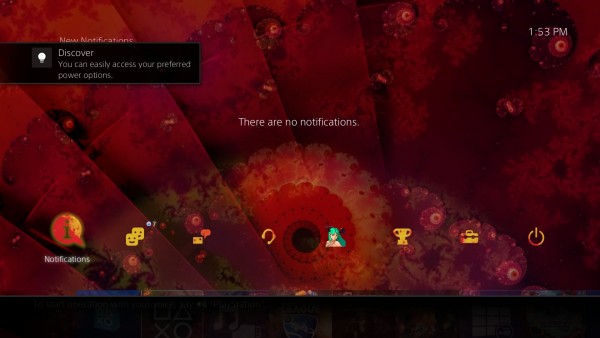 Above: That stupid Discover pop-up as I turn on my PS4 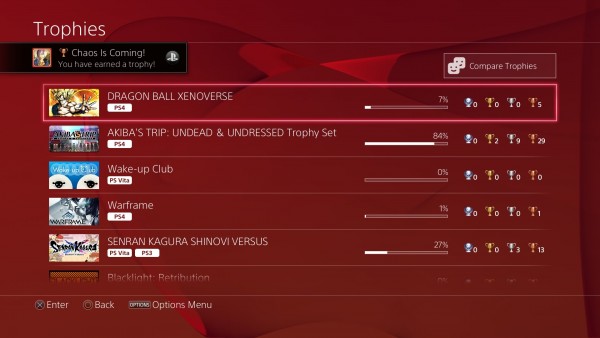 Above: Me glitching out the automatic screencap of my trophy being unlocked on PS4.

Remember the PS3’s amazing ability to swap controllers on the fly by manually changing what player the controller is set for via numbers one through 4? Well, you can still do that somewhat by changing the logged-in user associated with that controller, but it is much more annoying to back door and not so user-friendly by far. Still awaiting this to be added as well.

Playstation Now seems to be Sony’s over-priced answer to the backward compatibility, charging players an average of $3 a day to rent digital downloads of many PS Classics and PS3 games on their PS4. Not a bad idea with how well Redbox works, but a bit overpriced considering. Try renting a game like Dragon Age: Inquisition, for example. I’ve clocked over 90 hours into that game running side-quests and doing other tasks and still am maybe around the half-way point of the story. Go ahead, do the math at how much you’d have paid renting a game like that at $2.99 – $4.99 a day. Now consider most people don’t have the time to sit in front of a game screen for 12 plus hours a day like I do. The average gamer gets around 3 hours a day to enjoy their consoles and games. That’s $90 to have rented Dragon Age: Inquisition to the half-way point had I not purchased the full game. Sure, you could say that it is a nice way to try a game out before buying it, but isn’t that what free demos are for? Granted most of these games no longer have demos available, but there are always videos of gameplay and the like online. As pointed out by the other journalist, what’s worse is not only the cost for the rental fee, but those who have limits on their bandwidth amount they can use each month are in danger of going over their cap and being hit with additional fees for hundreds of dollars due to the constant send and receive that PS Now requires. 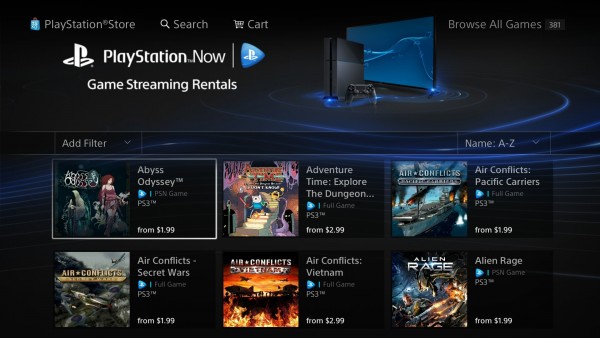 Lastly, lets take a gander at the PS Plus free games up to now, shall we? The PS4’s exclusive games have all been new games released on the same day as the PS Plus free games come, meaning that when you received a game such as ‘Tower Of Guns’ for free as a Sony Playstation Plus member that was the same day the game was placed on the market. With the small library of games exclusive to PS4 it is no surprise they’d be running out of things to offer, even with all of the indie games given each month. This month we finally received our first title that had been out for some time prior, ‘Styx: Master of Shadows’. Now, some may look at this as a bad thing, but I, however, am content with this happenstance. For one thing, that means we may end up with some better titles that have already been released such as ‘Guilty Gear Xrd -Sign-‘ in the future. It is, of course, a mixed bag, as you may guess though, since that also means you may end up with free games given you already purchased, as is what often happens to me on Microsoft’s Gold Membership mere weeks to days after I buy a game more often than not. Still, on the flip side once again, this also means we may end up with things other than lackluster indie games; things like Dragonball Xenoverse or A-list titles such as Call of Duty in the future. As the old expression goes; only time will tell.

In the meantime, feel free to tell us what you think below! Do you disagree with my complaints or comments? Do you agree? What features are you looking forward to or hoping they add or remove on the Playstation 4? We’d love to hear your opinion!