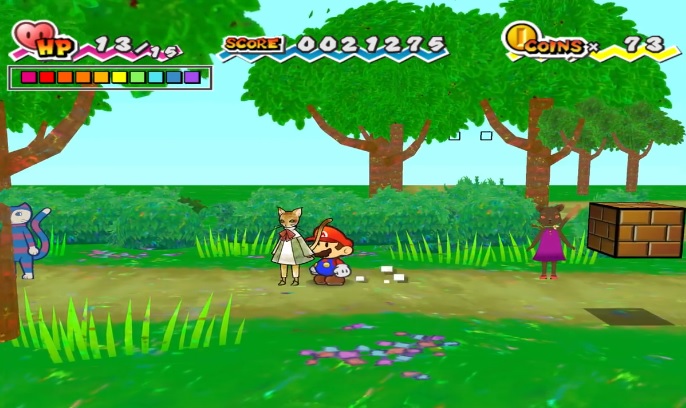 From the dawn of gaming, unused content in games has cast a fascinating light on what could have been. Whether its unused levels and areas like in the Mario or Zelda series, scrapped Pokémon and trainer fights like in that series or even whole mechanics like Bottles Revenge in Banjo-Tooie, games have always had tons of interesting things hidden away in their code.

And as it turns out, Super Paper Mario is no exception. Yep, the hybrid platformer/RPG title for the Wii actually has a whole treasure trove of intriguing stuff found deep within the game’s files.

Some of which a new unused content channel called GameIntus has posted a video about on YouTube. Here’s the video if you want to see it for yourself:

As you can see, there’s quite a lot of interesting stuff in there. Stuff like… furry cat people.

Yep, for whatever reason, Super Paper Mario has bizarre humanoid cat people only found in the game’s unused levels. These people (and the levels they’re in) bear no resemblance to anything else in game, and feel completely out of place in Mario’s world.

Because these cats and levels are not in every version of Super Paper Mario. Instead, they’re only in the Korean version of the game.

Yes really. There are unused levels (and character designs) only found in the Korean version of Super Paper Mario.

And that’s especially strange given the date said version came out. Namely, more than 2 years after the Japanese one (as well as after every other version released worldwide).

So why are they here?

They could be remnants of the original game Super Paper Mario was built on. After all, it always felt ‘off’ for a Mario game, and the plans for the title changed a lot in its development.

So it’s a real possibility these cat people could be from some ‘original’ RPG Intelligent Systems were working on before they retooled it into the game we know and love.

Yet if that’s the case… that wouldn’t explain why they’re only found in this version. After all, the changes would have happened before it came out, not two years later. Why would anyone add beta content BACK into a published game?

It makes no sense.

But nor do any other possibilities. Oh sure, these could be from a cancelled game the company was working on in the Wii era, but again… why add them in here? Why in the Korean version?

Again, there’s no logical answer. Same with the idea that they’re just placeholders, since the game didn’t need any extra development. The only thing we can even picture being plausible would be some rogue developer sneaking this stuff in, and even then… it’s all very unlikely given the situation at hand.

Still, it’s an interesting bit of trivia none the less, and we definitely advise you to watch the video and see it all for yourself. Because there’s one hell of a story to be found here, and it’s just waiting for someone with the time and money to do the research and dig it up!