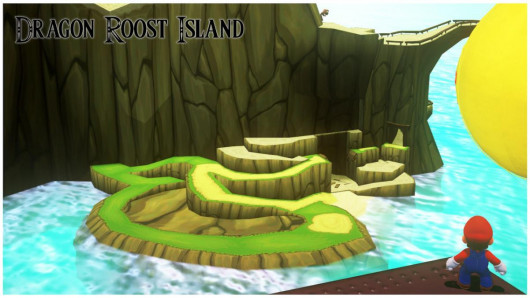 Super Mario Odyssey’s been seeing quite a few great custom levels recently. From the difficult Kaizo challenges seen on Twitch to the kingdom mashups released recently (never mind the amazing Bob-omb Battlefield remake), the game’s gone having nothing to a decent modding scene in no time at all.

But now another fantastic kingdom joins the list. And this one… well it’s got a bit of a Hyrulean twist to it.

That’s because this time, today’s Super Mario Odyssey custom kingdom is Dragon Roost Isle from the Legend of Zelda The Wind Waker. It’s a location that works surprisingly well in Odyssey’s engine, and one of the most Mario like ported levels we’ve seen so far.

And it’s one that’s only been made better by the Zelda touches added by the level’s creator. For instance, you know how Goombas have different hats in the ‘real’ game? Like construction hats in New Donk City or Sombreros in Tostarena?

Well, that’s the case here too! This time, all the Goombas wear Link’s famous green hat too, which adds a lovely extra touch to an already fantastically well designed kingdom.

What’s more, it’s not the only one either. Oh no, Power Moons are now Triforces too, with Rupees replacing coins and missions taking inspiration from the original game as well. Only minor details sure, but they’re ones that are nice to see none the less, and they go that little further into making it more than a mere model import.

So if you’re interested in an Odyssey kingdom with a Zelda twist, check it out in this video by BeardBear:

Then maybe consider downloading the mod itself over on Game Banana. well worth it, and it’s one custom kingdom that’s well worth playing.