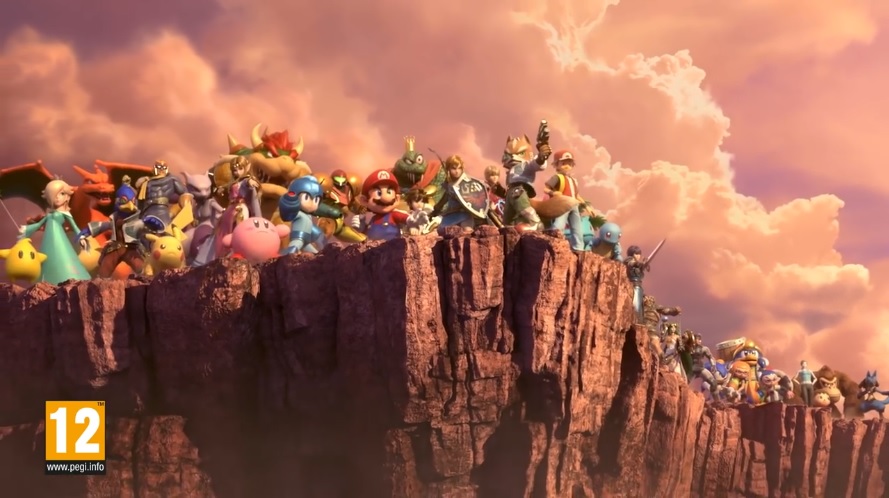 Nintendo never catches a break when it comes to leaks, do they?

Whether it’s Pokémon or Paper Mario, Zelda or Super Mario Odyssey, it seems every single major title they release gets leaked online early. It’s like even the mention of a new title is the universe’s cue to have shops break street dates and users post ROMs online.

Unfortunately for Nintendo, it’s no different with Super Smash Bros Ultimate. Indeed, thanks to a few shops in certain countries breaking street date and releasing the game early, the game has now started spreading online, with hackers and dataminers having dissected and posted every little element from it.

And when we mean everything… well we mean it. From bosses and cutscenes to music and Spirits, virtually every aspect of Super Smash Bros Ultimate has now been posted online. Hell, even the Classic Mode subtitles and boxing ring text is up there now!

So like with every other leak in Nintendo history, we’re gonna look at all of it. Starting with the various newly revealed tunes ripped from the game’s phenomenal soundtrack…

Which very much favours series with newcomers and stages over those without. That’s why WarioWare (Which has barely gotten anything) hasn’t gotten any new songs, whereas the likes of Donkey Kong Country, Castlevania and Pokémon has gotten tons of them.

First up, there are King K Rool’s battle themes from Donkey Kong Country 1 and 2, both of which get fantastic remixes:

No luck for DKC 3 or DK 64 fans mind you, but the sheer fact Crocodile Cacophony actually got noticed is impressive enough already, as is how Snakey Chantey got its own remix in this game.

Zelda’s done pretty well in the music department too. In that case, not only have the Breath of the Wild theme and Kass’ theme managed to get in:

But so did the trailer music for the 2017 Nintendo Switch presentation too. That’s an unexpected choice, even if it one of the best Zelda themes Nintendo have released in the last decade or so.

And that’s not the only unexpected Zelda song either. No, the Molgera battle theme from The Wind Waker got a new remix too. Wait, you say it’s already had one in previous games?

Yeah. Yeah it did. But the Smash Bros Ultimate music team clearly weren’t satisfied with that take, so they replaced it with an all new remix of the theme instead. Major kudos for that amount of effort there guys!

Finally, F-Zero and Metroid did okay as well, with the former getting a new remix of Big Blue:

And the latter getting a nifty new version of Ridley’s theme. Again, appropriate given the guy’s finally made it to the roster:

So that’s a small sample of the new tunes from the game. If you want the rest, you can find a list of them all in this Google Docs sheet here…

As well as the actual download on various hosting sites and internet forums.

But enough of the music for now. What about the story you may ask?

Well, it turns out there’s a surprising amount of depth there too. However, before we get into it, I think it’s only right we ask you to confirm something first.

Basically, are you happy knowing who the final boss is in Super Smash Bros Ultimate?

Cause we’ll say this much before the spoilers start; it ain’t who you think it is. In fact, the whole Lifelight intro is a tad misleading, and actually gives the wrong impression about what’s going on behind the scenes.

So if you’re interested in spoilers, keep reading. If not, click the link here and you’ll skip ahead to the next part of the article, which should be enough to avoid the spoilers.

Is not the main villain

Or at least, he’s not the solo villain. This isn’t a Tabuu situation where the one new bad guy is behind everything and he’s just some random evil dude who comes out of nowhere.

Instead, Galeem is actually trying to stop another antagonist. Namely, Dharkon. He’s the ‘shadow’ version of Galeem, represented as a monstrous eldritch abomination protected by an army of Crazy Hands. As you can see, he’s basically nightmare fuel incarnate: 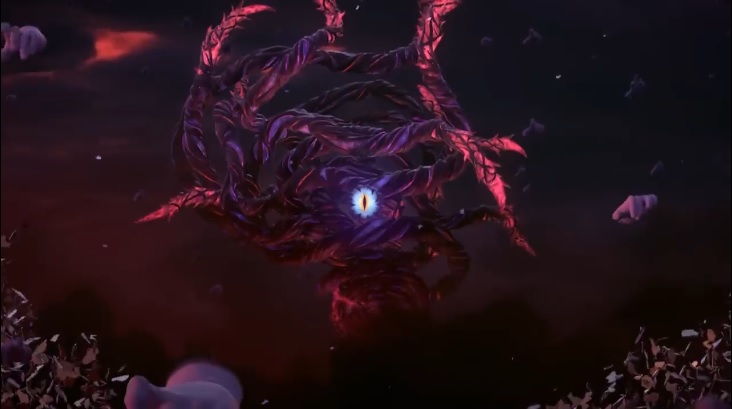 And that’s where the twist comes in. Basically, Galeem was using the fighters as an army to fight off against this thing, and once you defeat him, well Dharkon takes over. The world gets replaced by a new realm (the World of Dark/Dark Realm)

Which then gives you a new ‘world’ to travel through, as well as a different final boss to take down. Beat that…

Then things get a bit confusing.

Long story short, you then get brought to a third map, known as the ‘Final’ map, with yet another new final boss. This time, it’s a merge between Galeem and Dharkon, to form some sort of ultimate being created by both light and dark.

Talk about a dramatic conclusion.

However, it’s not the only interesting confrontation you’ll face in this mode. No, there are no shortage of other bosses either.

Yeah, Marx from Kirby Super Star makes it in this time. And Ganon takes his appearance from Ocarina of Time too, as shown here: 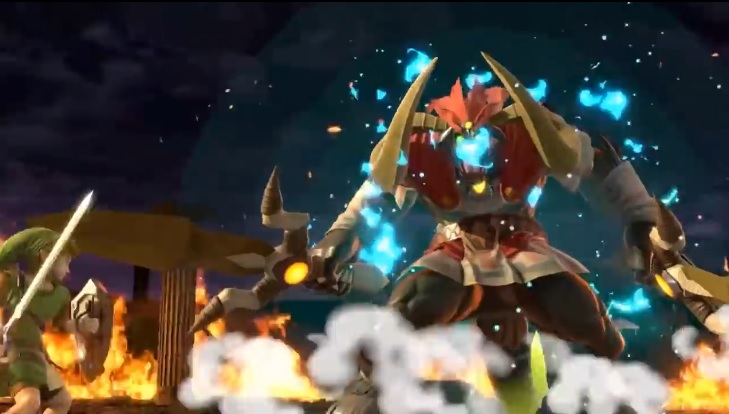 Here’s Marx by the way: 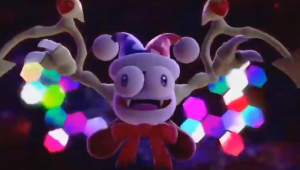 Bet you didn’t expect either of those two to make it in! We sure as hell didn’t…

Still, we didn’t expect much of what was announced for this game. Even the idea of each character having a different final boss in Classic Mode was difficult to take in.

We’ve also got information on the actual Spirits you find in this game too. All 1,297 Spirits in Ultimate have been datamined and named, and you can find the full list both here on Pastebin and on our own server.

As you can see, there are some… surprising inclusions and exclusions on the list. On the one hand, characters from Mario + Rabbids Kingdom Battle, the Mario & Luigi series, Wario Land series and Shantae series all make it in, which is nice to see.

That’s good, especially given their lack of representation in the main game. Yet at the same time, only a few characters from a game’s main cast seem to make it in, leaving situations where about 30% of the ones you expect are in, and the other 70% are just randomly absent. Ah well, it’s a decent sized list, so we’re sure at least some of your favourites will be on it.

And it’s possible some of them will shopkeepers or trainers too. Cause the list of shopkeepers for Spirits mode has been revealed too. These are Sheldon, Anna, Funky Kong, Timmy and Tommy and Beedle respectively.

Meanwhile, the trainers include Rodin, Peppy Hare, Daruk and Kat & Ana, all of which have their own ‘unique’ styles for training Spirits. Neat o.

Still, that about wraps it up for single player spoilers. Onto the random miscellany!

Like the boxing ring titles for the newcomers. These are as follows:

You can see the rest in this Pastebin. (or mirrored on Gaming Reinvented here)

Still need more titles? Well, the Classic Mode subtitles have also been datamined, and the ones for the newcomers are as follows:

Again, if you want the full list (including the ones for veterans), those can be seen in the pastebin here (or again, mirrored on Gaming Reinvented here).

If you want some milestones on the other hand… well we won’t be posting all those here. They’re not all that interesting this time around, and there’s some ambiguity about how many vs matches need to be played for each one. That said, it’s likely the ‘Million Vs Matches’ award is the one that says:

You’ve fought [X] battles! There are no words…

Which would be fitting in about 1990 or so. In 2018 with the internet being what it is however… well it’s almost inevitable that the top ‘milestones’ will be knocked out in a week or so by the most dedicated players. Either way, they’re there if you’re interested, and they’ll all go down quickly if you know what you’re doing/have too much free time on your hands.

And that about wraps it up for the Super Smash Bros Ultimate leaks. There are certainly a few more things you can find if you’re interested (like Mii costume choices, data setups for unplayable characters and mysterious empty slots that may hint at future DLC choices beyond the 7 already mentioned), but we’ll keep it a bit shorter for the time being.

So what do you think of it all?

Are you happy to know that the World of Light mode has more to it than meets the eye? Do you feel Nintendo did a good job choosing the Spirits for the game, or the bosses you fight in various modes?

Tell us what you think about this (and much more) in the comments for the article or over on Gaming Latest today!