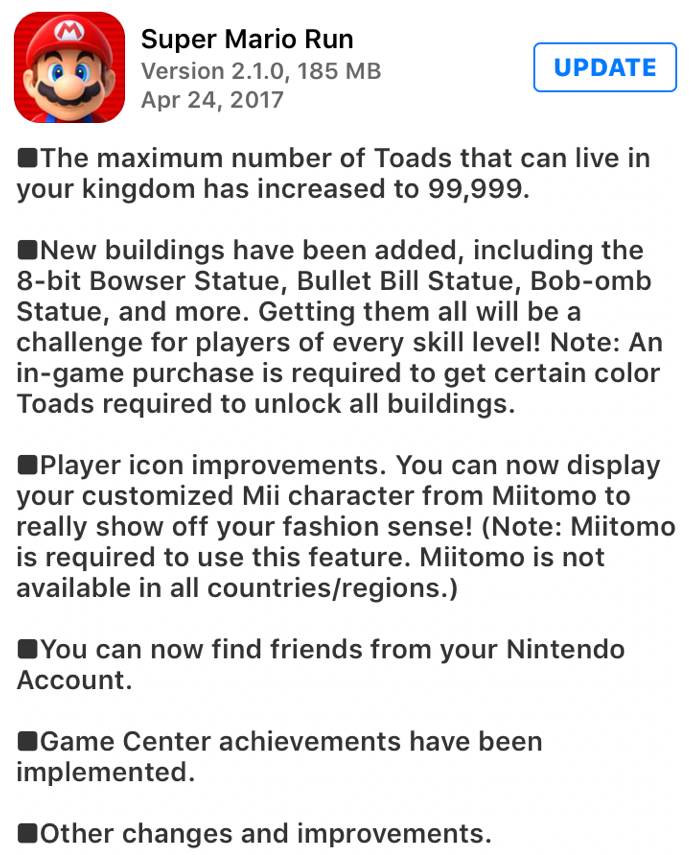 Ever since Super Mario Run was released last year, it’s gotten a fair few regular updates. Nothing major (like new levels), but enough event items and Kingdom Builder additions to keep anyone busy. Like say, the Golden Goomba events run in February. Or the one off Christmas events that kickstarted the game in the first place.

And today, another one has been released! However, this is no ordinary update. Oh no, this update does quite a few things. Like fixing one issue that’s been causing player’s trouble right from the get go.

Yep, it removes the 9999 Toad limit. This is a freaking godsend for the game.

Why? Because as any player knows, you need thousands of Toads to get the more expensive objects.

And that presents a major problem. Because at only 9999 Toads maximum, you literally couldn’t ever afford to buy the objects without deliberately losing Toads to change your ‘balance’. You simply wouldn’t have any red Toads to buy the 8 Bit Mario statue or enough green Toads for the Luigi one.

Changing the cap to 99,999 fixes this immediately. Now you can always get an item for your kingdom without worrying at all about hitting the cap and not having enough Toads to make it available. Best of all, even the new items don’t seem to break this! Yeah, they cost more money and require more Toads, but even the most expensive one now only needs 15,000 red Toads and a few thousand of the other colours. So completionists can rest happy knowing they can afford anything the game throws at them.

As for other additions? Well there are some here. For example, now the game lets you use your Mii from Miitomo as you icon, if showing off your fancy outfits is something you care about. And Game Centre achievements have been added in too. So the game now works fine with Apple’s achievement system.

Either way, it’s a much needed update, and one that will make the game much more enjoyable to play for those still involved in the whole thing. Kudos to Nintendo for the fixes and improvements.