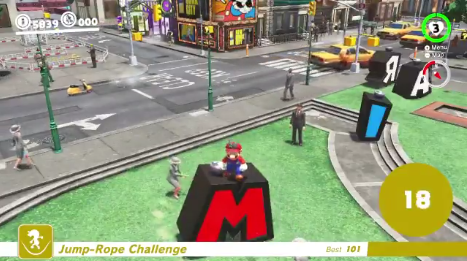 A couple of months ago, you may remember how the Talkatoo glitch completely broke Super Mario Odyssey’s Jump Rope Challenge Mini Game. Basically, you’d chat to Talkatoo while Cappy was about to hit his head from behind, which would then freeze the camera and let Mario hang in the air above the mini game, getting infinite points in no time whatsoever. It was a pretty easy bug to use, and until its patching, managed to wreck the scoreboard by filling up the top few thousand results with scores of 99999 or what not.

Fortunately, the glitch was patched and the scoreboard wiped. Everything’s back to normal again, right?

Well, not quite. Because you see, thanks to a new glitch in New Donk City, the exact same mini game has been shattered again. Yep, an all-new bug has now been found by Syrkl which lets you break the game all over again, meaning max scores on the challenge are now a matter of patience rather than skill once more.

And this glitch all revolves around those letters in the park. Why? Well, you know how by default, you’re not able to take them out of that small area?

Yeah, well it turns out that’s not quite accurate. Indeed, while there’s an invisible wall keeping the letters penned in, you can also push them around with a scooter if you line up correctly on the side of the letter. This (plus a bit of careful aligning) then lets you push the letter outside the zone it’s found in and take it all around the city.

And from there, well things get a bit weird. You see, due to the fact the letters weren’t designed to be taken beyond a small part of the level, they have some weird effects when used elsewhere. For instance, the letters can be sent into hyperspace if you line up the scooter correctly in certain areas, forcing the letter at high speeds through walls and off edges:

Taking it near the taxi you can capture warps you to the secret level, since it only checks you’ve ‘captured something’ to warp you, not what object you’re actually controlling:

Whereas using it near the RC Car can in turn force that out of its own pen, letting you drive the mini taxi all over the city:

However, if you take it to the Jump Rope Challenge though, well it turns out the letter can be placed where the rope is. Then, just activate the mini game while standing on it and well, voila. You now automatically gain points by doing nothing, letting you reach the max score without moving a muscle:

It’s pretty much about as broken as you can imagine, and means whatever challenge is left in this mini game has now been utterly destroyed.

So yeah, give it a go if you’re interested. It’s not the simplest glitch in the world to pull off, but it will at least give you a quick way to beat the mini game, as well as a few funny effects around the city as a whole.