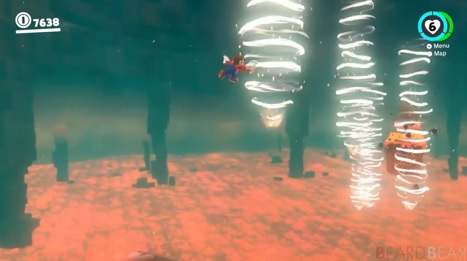 In recent times, Super Mario Odyssey has seen an increasing number of mods for it. These include edited physics with the moon jump and super speed code, remodeled collectables such as Shine Sprites from Mario Sunshine replacing the Power Moons in levels and unreleased costumes like Zombie Mario being made public early.

There’s some neat stuff there, especially given how new the game’s modding scene is right now. But it’s not what’s truly interesting about Odyssey’s mods.

No, that would be the custom levels. Cause you see, thanks to advancements in Nintendo Switch hacking (and the existence of a full-blown level editor for the game), Super Mario Odyssey has actually started getting custom levels too.

And as is expected from a new Mario game and its mods, one of these is a Kaizo hack intended to make the brutal finale even tougher! Yep, named Kaizo Darker Side, this mod takes the already challenging Culmina Crater area and cranks the difficulty up to eleven, adding in more enemies, trickier jumps and tweaked obstacles to do so.

Here’s a video of the mod courtesy of its original creator:

As well as a less comprehensive video from Beard Bear on YouTube:

As you can clearly see, it definitely ups the challenge quite significantly from the original, and really does show how tricky Odyssey platforming can become if you’re willing to step away from Nintendo’s fairer level design.

So, check it out if you’re after a new challenge. It’s not perfect (in part because of the level editor’s limitations, and in part due to being one of the first of its kind), but it’s a decent attempt none the less, and seems like a good start for the game’s Kaizo scene.