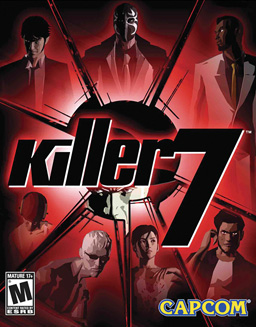 If you were around in the Gamecube days, you likely have at least some vague memories of a game called Killer 7. A strange action game based around a group of assassins called the killer 7 (who are manifestations of a man named Harman Smith), the story has them hunting down a group called Heaven’s Smile and finding out about a conspiracy involving Japan and it role in US politics in the process.

It’s a complicated game to explain really. The kind of title that makes you think ‘this is definitely a weird Japanese thing’.

Either way, it became a cult classic in the day, and led to later Suda51 works like No More Heroes.

And now, it seems like Suda51 has an interest in revisiting the title! Why? Because in a recent interview with Hardcore Gamer, he’s quoted as saying that he ‘wants to do something with Killer 7 again’. That’s not the only comment either. Oh no, he also said made this hint about a remake too:

I feel that Killer 7 is the hardest of my games to play. I want to and feel that I need to do something about that. A remake, or remaster or something like that… (Sly grin.)

So yeah, there’s definitely interest in the idea of a remake there. Okay, it’d need to go through Capcom (since they published the original title), but they were supportive of it before. So it’s likely they’d support a remake too, at least if the interest was there.

But what do you think? Would a Killer 7 remake be a good game to have? And if so, what changes do you think the title should receive?