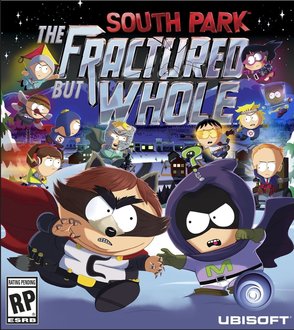 When it comes to difficulty settings in games, there are hundreds of ways mechanics can be handled to make things more interesting. You can merely up the enemy health or damage, like in Mario & Luigi Dream Team or most Zelda games.

You can change a couple of thousand variables to make things annoying, like in Super Smash Bros Brawl’s Subspace Emissary mode.

Heck, you can even redesign the entire game to suit the new difficulty. Like in Ocarina of Time 3D with its Master Quest mode, or the classic NES title with its second quest.

But one thing these games don’t do on difficulty settings is change how your character actually looks. They change everything else sure, and occasionally an extra mode adds a joke character for laughs (like Tofu in the Resident Evil games). But for the most part, character design remains unchanged throughout difficulty modes.

However, that’s not the case in South Park the Fractured But Whole! Oh no, in this game, the creators have decided to do something extremely controversial for the difficulty modes.

Namely, they’re changing the skin colour of your character the higher you ratchet up the difficulty slider. Put simply, the harder the difficulty, the darker their skin colour will be in the game. Here’s a video showing it in action:

As you can tell, it’s an… interesting system. After all, it’s clearly making a political point about racial inequality (since black characters have a harder time in game than white ones), and they’ve definitely tried to reflect that in the design. For instance, enemy health and damage doesn’t go up with difficulty increases, but the amount of money you get in game does decrease. This aims to mirror what it’d be like growing up in a struggling household without much in the way of immediate job prospects.

Add how the game changes the way you’re referred to based on your skin colour (to try and show racism from the characters in universe), and you’ve certainly got a creative set up for a difficulty slider.

But does it work well?

Honestly, I’m not sure.

On the one hand, it does indeed go well with South Park’s somewhat controversial brand of political commentary, with this design decision being exactly what you’d expect from Trey Parker and Matt Stone. I mean, these are the guys that make jokes about Saddam Hussein, comment on the situation with Mohammad not being portrayed in fiction and show Steve Irwin with a stingray barb stuck in his chest in a hell joke. They’re known for taking on controversial subjects and trying to get people to look at them in a new way. Controversy is part of life for them and the series.

In that sense, the system here works great. It’s attention grabbing, it depicts the issue of racial inequality in a clear and easy to understand way and generally it fits the feel of the show the game is based on perfectly.

It’s a very South Park like thing to do here.

Yet it still has people arguing against it.

And there are various reasons there. For one thing, it also feels like it may be ‘controversial’ for the sake of being controversial.

For example, you can already be part of any number of marginalised groups in this game. Like, you can be transgender for example, with that option being chosen in the intro.

However, despite real life issues with prejudice there, that doesn’t affect the game. Instead, it merely changes some dialogue here and there.

Which is also the case with other similar situations too. Sexual orientation, class background… none affect anything here.

Just being darker skinned. So that’s one thing that people oppose it for. It’s inconsistent.

It’s also controversial for those who don’t like politics too. Remember, some people play games for escapism. They don’t want to be reminded of political issues in games.

And this? Well, this is as political as it gets.

So anyone in that group who liked Stick of Truth won’t be happy with this either.

And then there’s a few design issues it brings up. For example, the system changes the reward you get from battles too, with darker skinned characters getting less money for defeating enemies than their lighter skinned counterparts. That’s again an interesting setup, but I’m not sure it makes much sense here. Why would your skin colour affect how much you get from beating someone up? You’d think that after a fight, the racial background of their attacker would be the least of someone’s priorities.

It’s a creative change, but perhaps not a well thought out one.

Either way though, that’s how South Park the Fractured But Whole does difficulty settings. You increase the difficulty; your character is made into a person of colour.

So, what do you think about it? Are you happy that they used the game’s difficulty settings as a way to make a political statement?

Or would you rather have seen them just stick to a more traditional hard mode setup instead?

Post your thoughts in the comments here or on social media today!