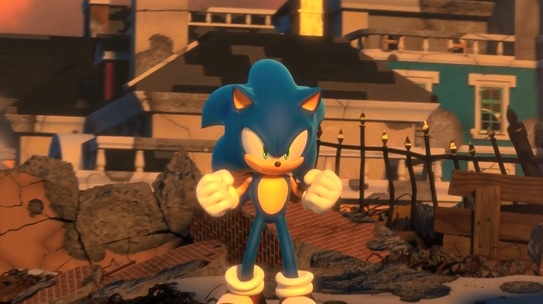 It was revealed at Sonic’s 25th Anniversary Party last night and is due out on various consoles in 2017. Here’s the trailer for the game:

As you can see, it follows on from Sonic Generations with the two versions of Sonic working together again this. In a game described as a new experience rather than a sequel, it asks you to ‘join the resistance’ against what seems to be Eggman’s rule of the world.

So it’s definitely going for a darker tone than before. Hopefully it won’t be another Sonic 2006 or Shadow the Hedgehog this time.

What do you think about the new game? Is it a title you plan on buying when 2017 rolls around?

I was really excited when I saw it earlier. It looks amazing. I hope it's like Sonic Generations and Sonic 06 combined. On another note, I hate the Sonic fanbase. I never understood why people didn't like it until now. Here's a comment I found. It's not word for word since it was 2 hours ago,  but it went something like this: "Why did they have to put classic Sonic in it? It was only thing that made Sonic Generations feel fresh and new. Now it's ruined." Or something like that. I mean, it's a new game and people are… Read more »

Yeah, I do. Fixed the name in the article.

Thanks for spotting the mistake and telling me about it!

Another NX game known for a console we know nothing about  :p