A Professor Layton Television Series is Coming in 2018! 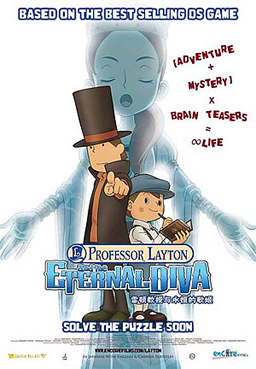 Well, it seems the video game adaptation train just keeps on going! Indeed, not long after Castlevania and hot on the tails on everything from Sonic to Klonoa, it seems Professor Layton is getting a TV series based on it too.

This series will be a 26-episode anime, and will air sometime in 2018.

And you know what?

I honestly feel like this may turn out to be one of the better video game adaptations, right up there with Castlevania and Pokemon. Why?

Well, there are a few reasons. Firstly, Professor Layton has already gotten an animated movie in (what we expect) is the same style under the name Professor Layton and the Eternal Diva. This film in turn got decent reviews from critics, with IGN UK actually saying it was one of the better game movies overall.

So, unlike many franchises, there’s a precedent here. Level-5 and their partners have already proven the series adapts well to other media forms.

Secondly, the structure of the series works a lot better for an adaptation as well. Why?

Well, think about it. The Professor Layton series is heavily story driven. It’s basically an interactive novel with puzzle gameplay, in the vein of franchises like Ace Attorney.

This works well in other media, since the characters and stories are already fleshed and easy to adapt to a non- interactive experience. You can already take away the gameplay in a YouTube playthrough and have an engaging storyline to follow.

Contrast that to say Mario or Sonic (or even worse, Tetris) and the difference is incredibly obvious. Layton works in other media, because the format of his games are very similar to said media.

It’s also animated too, which is always a good sign. Live action and CGI just doesn’t work that well with game franchises, since it can’t pull off the characters and happenings in a believable, interesting way. Either the looks are too stylised or the budget just isn’t there to make it work.

Animation avoids this, and tends to lead itself to better adaptations here.

So as a result, I feel it’s likely the Professor Layton series will do well. It’s the right type of game to adapt to a TV series, it’s in the right format and there’s already a precedent in the form of a well received animated film released years earlier.