When it comes to Mario Kart clones, they’re just about everywhere these days. You’ve got the shovelware clones involving movie licenses like Shrek and cartoons like Woody Woodpecker. The app store is filled with free and ‘in app purchase’ supported knockoffs made to cash in on people’s naivety.  And hey, a game called Mole Kart was even temporarily removed from the app store after it was found to be a rip-off of Mario Kart Wii.

But very few clones are quite as bad as this. To put it simply, Poppy Kart is quite literally a carbon copy of Super Mario Kart for the Super Nintendo. Like, a literal copy, with the only real difference being some terrible GFX changes and atrocious level design. Just look at it for yourself:

Above: Video by Jim Stirling, who quickly points out blatant this thievery really is.

The similarities are just ridiculous. The game looks and feels like Super Mario Kart as drawn by an eight year old. The items are literally from Mario Kart, with the Green Shell and Star basically being copied over unedited and the Banana Peel replacement being nigh identical to its inspiration in all but colour.

The menus are seemingly stolen. The coins and question blocks are flat tiles on the floor like in the original game. The character sprites are seemingly edited from Koopa’s graphics in the original game (at a level of quality that would make both ROM Hacking.net and MFGG cringe). Heck, they’ve even got stuff like the little character sprites moving along the top of the screen as a position indicator.

Let’s not forget the identical track concepts either. Another video of this game clearly shows copies of Koopa Beach, Bowser’s Castle and Rainbow Road:

Above: Even the ‘missions’ seem to be inspired by another game.  Probably one with ‘Diddy Kong’ and ‘Racing’ in the name.

But do you know what’s even more depressing? This isn’t a fan game, ROM hack or experimental title on some flash game portal. Nope, someone is trying to make real money off this on Steam: 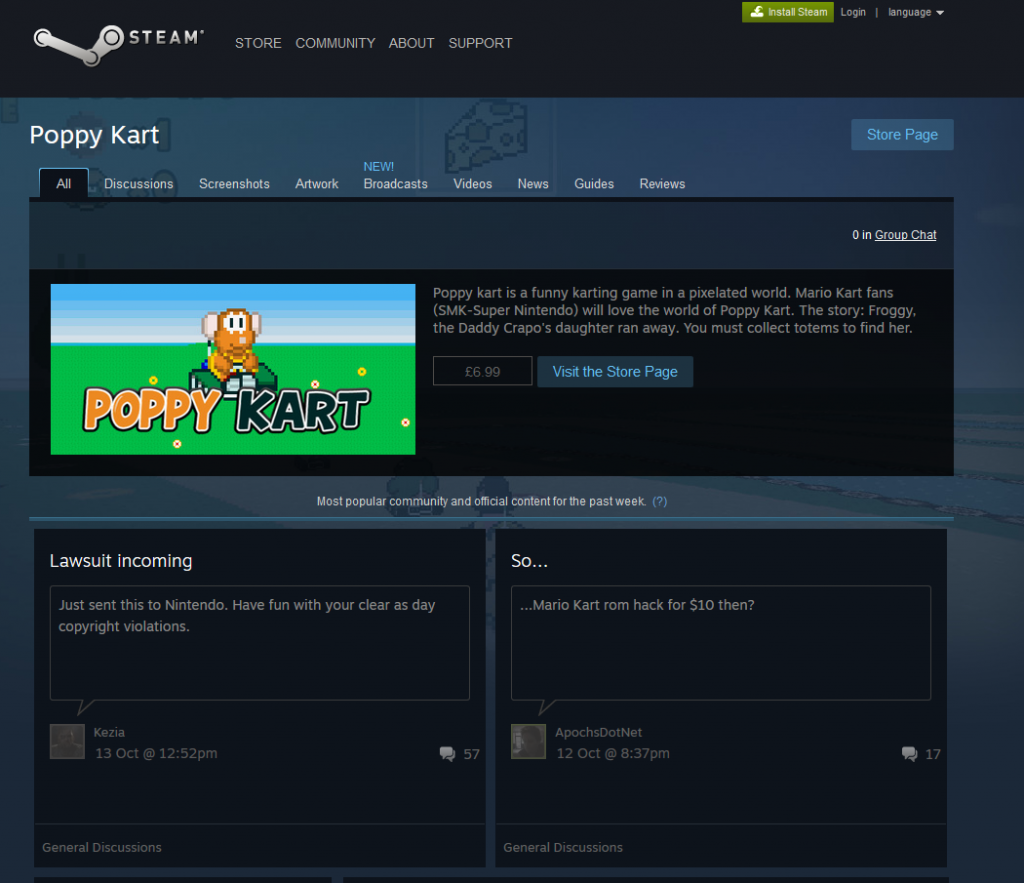 Above: When even the comments are calling you, you know you messed up.

You’ve just got to despair at how moronic this all is. It’s like someone has absolutely no idea about such trivial things as copyright law, intellectual property or the rules behind trying to sell games on a platform like Steam.

It’s literally Mole Kart 2.0 (or maybe ‘Super Mole Kart’ if you’re being extra cynical), and it’s probably going to be gone from the service within a week after Nintendo sends a DMCA or cease and desist notice.

So what do you think about this blatant Super Mario Kart knockoff that someone apparently thought was fine to sell for ten quid?