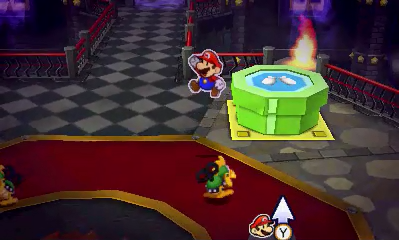 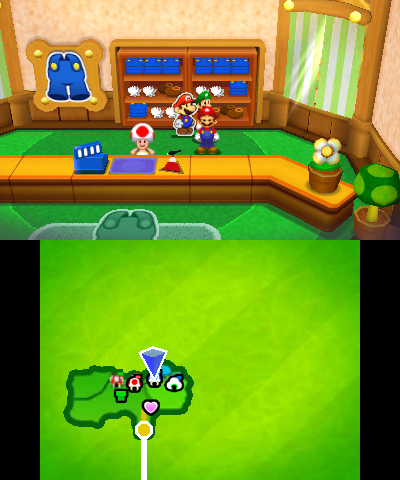 Ever since Paper Mario Sticker Star was released and took away all the best part of the Paper Mario series, fans have been wanting a more… traditional Paper Mario experience. And now, you’ve got one in Mario & Luigi Paper Jam, thanks to a glitch.

Seriously. This glitch lets you play Mario & Luigi Paper Jam… as Paper Mario on his own. In other words, it turns a significant part of this title into what’s basically a 3DS Paper Mario game. Here’s how you pull it off:

Didn’t understand the video? Well basically, it’s like this:

And that’s it!  So what can you do once you’re using only Paper Mario?

Well, pretty much everything.  You can speak to NPCs, get into battles with enemies, collect items, buy things in shops, equip gear (including on the characters you’re not using), travel via warp pipes, visit any location in the world…

Above: A small preview

The only things you can’t do are Lakitu missions (more on that latter), watch cutscenes (they usually freeze) or fight the final boss (you can’t get through the door).

Above: Why you can’t play Lakitu Centre missions

So yeah, it’s pretty cool, isn’t it? You can turn the whole game into Paper Mario 3DS, as done the right way. But that’s got to be it, right? I mean, it’s a cool glitch, but how can it get any more interesting?

Well, you can save in this state. Not too exciting by itself, but when you return to the crack Paper Mario walked through and attempt to exit again…

You end up in the place you saved again. With the whole party. And one other small thing.

The ability to walk through walls. Or anything else you may feel like walking through.

In simple terms, collision detection literally dies on the spot. Remember how Big Rigs worked? Yeah, that’s how this game now works until you enter a pipe or a battle. Nothing acts solid at all and you can get to all kinds of crazy places… 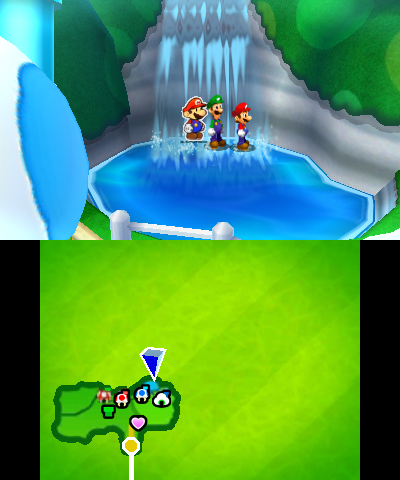 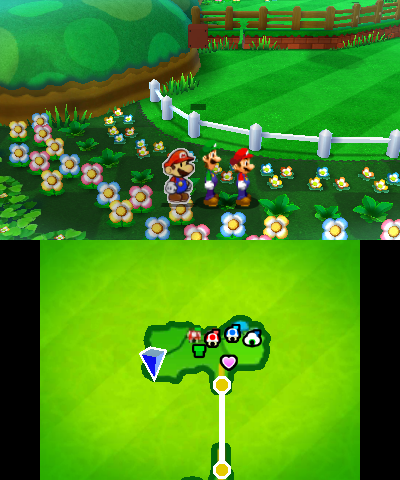 Above: In other random inaccessible areas.

Add how you can choose where your walking through walls journey begins (which now includes places like Neo Bowser Castle, the Twinsy Tropics Dungeon, the Doop Doop Dunes Grotto and otherwise previously annoying parts of Mount Brrr), and how much height you can through repeated uses of Trio Plane, and you can pretty much play the game like some sort of god.

Also amusing, the game is now very, very quick to complete due to this and the other bugs people have found.  Skip through most walls, die to win most boss battles, skip half the story by entering the wrong side of Gloomy Woods… it’s very likely that by this point, the possible world record for the title is approaching the hour and a half mark, for a game which is supposed to take nearer thirty hours.

I have tried, but can’t do it. Is it only possible when the Papercraft Megacrinkle Goomba is there? I beat the game already. Also, the directions on this site were extremely vague. The entire left wall is made of two huge bumps…

It’s one of those things that’s hard to explain in text. Here’s a video:

Hope that makes it clearer. The other video was pretty poor in terms of picture quality, so it was kind of hard to make out.

I saved and tried to do the walk through walls thing, but it didn’t work. Also, one thing. If you go to doop doop dunes and hit the three-colored block, it softlocks you. One weird thing to note.

whenever i play i feel i am in heaven. i enjoyed this game so much. i would like to recommend you all ffxiv gil item and Mario game.