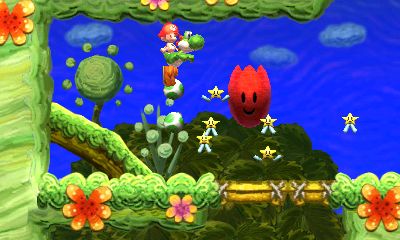 Ah Yoshi’s New Island.  A retooled Yoshi’s Island sequel from the little known company Arzest (made up of people from the now defunct Artoon), it’s not a game that the press have played much attention too.  Indeed, as mentioned in the article linked from the ‘Miyamoto wants to make a super original Yoshi game’ post, many of them seem to have a generally ‘meh’ attitude towards the whole deal and about as much hype for it as your average Xbox One game.  But me?  I think the game looks promising, and so here are some screenshots and details about it from E3. 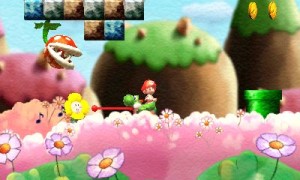 First things first, while people seem a bit distrustful of this new art style, I have to say I really like it.  Not only does it strike a nice medium between Yoshi’s Island crayon graphics and Donkey Kong Country style computer rendering, but it’s actually the most original and decent looking artwork Artoon… oh wait, Arzest have ever come up with in their lives.

I mean, its original for one thing.  When has Ar…zest ever came up with anything original looking before?  That’s one improvement.

And it’s consistent, unlike Yoshi’s Island DS and its graphics that are barely disguised redrawings of graphics from Yoshi’s Island, Yoshi’s Topsy Turvy and Yoshi Touch and Go.  So hey, the art style looks nice.  And so does the fact this is an original level. 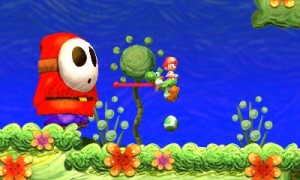 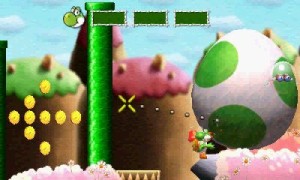 More screenshots.  I like the giant Shy Guy in the first one, it does the one thing that New Super Mario Bros failed to do, integrate the giant enemies with the actual worlds rather than separate them off in boss arenas and call them bosses.  The Mega Mario like destroying egg thing is neat too, and definitely seems like something that makes the player feel truly powerful. 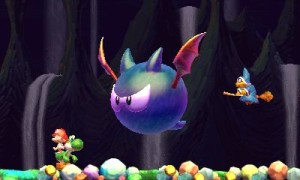 The big surprise for me however is this.  Why?  Because not only do we see Kamek transforming a generic enemy into a giant boss, but we also see a boss… outside of a castle!

Yeah, I’m surprised people haven’t clocked on to this yet, Arzest seems to be making the bosses fight in more varied places than just generic castle rooms with familiar settings.  That’s at least an improvement over the first two Yoshi’s Island games in some way.

And hey, Kamek returns too.  Got to love him. 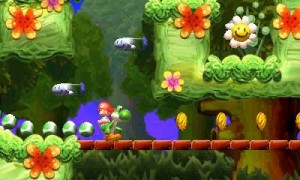 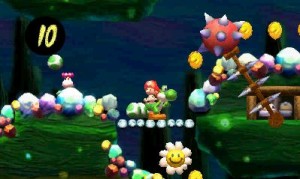 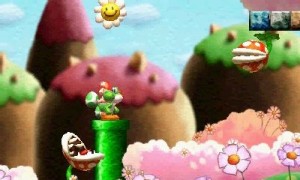 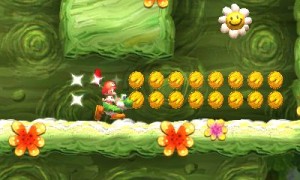 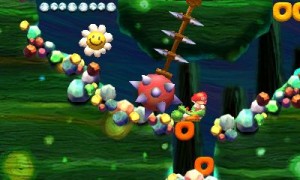 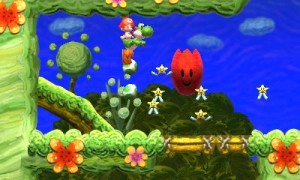 And the other screenshots look interesting as well.  Okay, the level design looks a tad questionable already (that spike mace area makes me think back to the hell that was the harder levels in Yoshi’s Island DS), but I do love how it feels like the traditional Yoshi’s Island tiles were transformed into full 3D in a way that makes them look like cardboard cutouts.  It’s very much the sort of ‘upgrade’ that Yoshi’s Island DS should have been.

Also, did anyone see this in the press release?

Throughout the game, different worlds feature a variety of art styles, including oil, watercolor and crayon

Looks like this game could be featuring multiple art styles including that of the original, ones like paintings and ones like… the above.  So I guess this is pretty much ‘Yoshi’s Island, plus all art styles ever used in the Yoshi series in one game’.

So there are some screenshots and thoughts about Yoshi’s New Island.  Is it as original as Super Mario 3D World, Super Smash Bros 4 or Mario Kart 8?  Course not.  But it does look a lot better than people give it credit for, and like a game I might even be willing to buy sometime in the future.