It’s a pretty amusing video too, so click the read more link and watch it for yourself.  Especially if you like seeing the ever more traumatic childhood of Mario and Luigi, who have officially gone from ‘fairly unlucky’ to ‘probably need lots of counselling by this point’.

It starts out by answering the question ‘where do babies come from?’ in the most literal sense possible; apparently in the Mushroom Kingdom they come from a giant floating sky land populated by sentinent storks.  Yes really, complete with the location actually looking like a giant stork in the middle of a rather impressive sky: 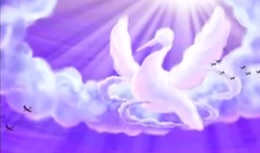 Above: This probably raises oh so many questions about the Mario universe…

And if this wasn’t enough to explain the whole thing… you then cut to the stork with Mario and Luigi flying off into the screen.  I guess by this point, it’s gone from ‘delivery stork’ to ‘stork postal service’. 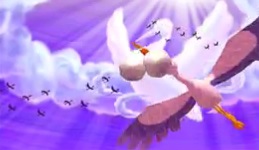 This is then followed by lots of recaps of the original Yoshi’s Island.  As seen below: 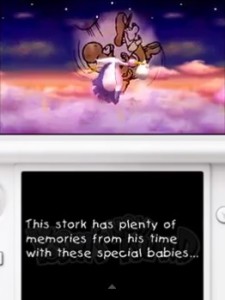 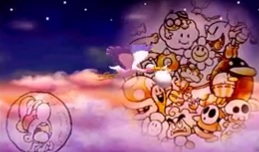 To be honest, I kind of like how they did these recaps in this game.  I mean, it lets people know how Yoshi’s Island works and what’s previously happened in the series, but at the same time actually leaves some of it to the imagination.  Not quite like Yoshi’s Island DS, which literally retold the story up to the final boss in about 30 seconds complete with more spoilers than you can imagine in a full Let’s Play:

Above: They even managed to give away the final boss and ending of the original in less than a minute.

Back to Yoshi’s New Island then, we then cut to Mario and Luigi’s parents house… well, sort of.  It’s the same place from the first game’s ending anyway, and looks kind of nice in the new art style. 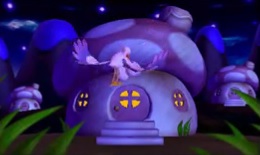 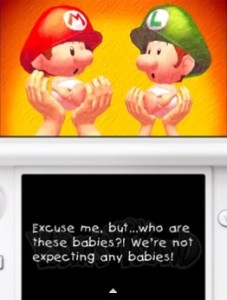 Above: The original game’s ending, subverted in mere seconds.

For added comic relief, the music literally falls apart and sounds like the player has just given up with the keyboard.  There’s probably a trope for that somewhere.

And then… we get this: 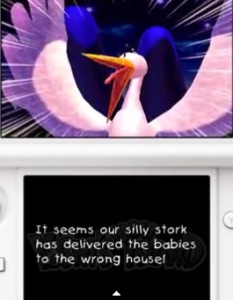 You just have to love the facial expression on that stork.  The sheer luck of unadulterated panic when he realises the babies have been brought to the wrong house and he’s royally messed up his job in the process.  It’s also probably best not to think about the couple’s initial reaction to this unexpected stork visit in the middle of nowhere. 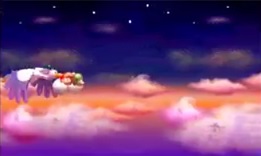 Cue the incredibly fast flying stork rushing off into the distance with the duo.  Complete with comically sounding wild west rodeo music in the background, just in case you needed some sort of hint. 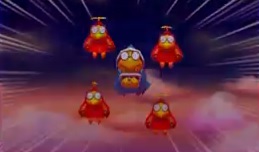 What’s he doing here?  Who knows.  I assume it has something to do with Baby Bowser’s plans (that we hear of shortly afterwards), but perhaps he just likes attacking delivery storks in a desperate attempt to take out any kids planning to overthrow the Koopa Kingdom.

What follows is unintentionally one of the most hilariously over the top things in a Yoshi’s Island game… Cue, Kamek and the stork presumably having a fist fight in the middle of the night sky: 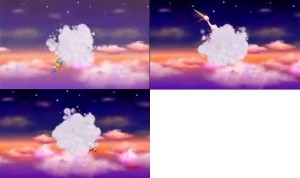 Yeah, it’s one of those scenes.  Like in cartoons where you see a big dust cloud and character heads sticking out and being pulled back in every few seconds.  Who knew a delivery stork was a job that could lead to someone literally getting beaten up? 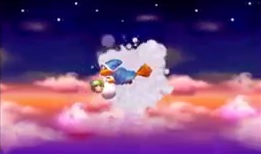 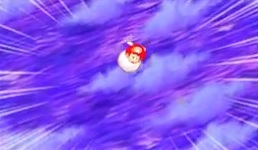 Above: Wouldn’t it funny if Baby Mario turned into a fireball next time he fell out the sky?  Like the karts on rainbow road in the recent Mario Kart games…

The scene shifts to Egg Island, the second home of the Yoshis.  They weren’t even trying with this place’s name: 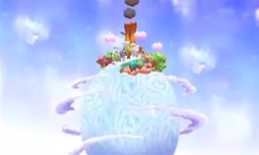 Baby Bowser unfortunately wants to turn it into a vacation home: 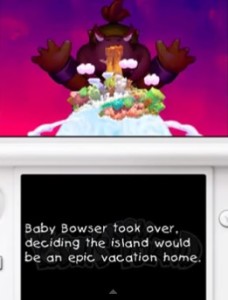 Yeah, I swear I’ve heard something like this before…

We hear that the Yoshis can’t find his hideout and live in fear of Bowser’s evil magic powers.  Yes, because Bowser’s Castles are always mega subtle:

Above: Complete with so subtle neon signs.

Oh well, at least it’s not the cartoon series castle.  The SMW cartoon one which called it the Coney Island Disco Palace.  That one had the sign light up letter by letter, like a Las Vegas casino: 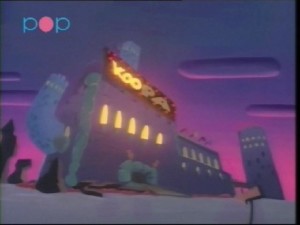 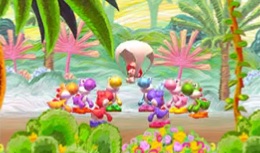 And it turns out Baby Mario is telepathic and can sense his brother’s location… somehow. 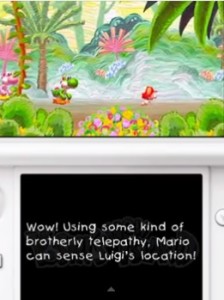 So why does Mario never display psychic powers either before this point or ever again?  Who knows, apparently babies in this series can use magic to determine the locations of their families. 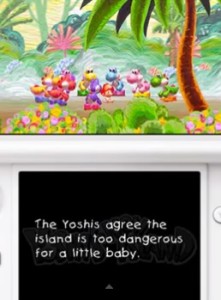 They’re not kidding.  Ever played Yoshi’s Island 1 or Yoshi’s Island DS?  The secret levels are too dangerous for a bloody special forces team, let alone a child.

Above: I strongly doubt anyone reading this could get through a level like this in real life.

And then it ends with them deciding to carry Baby Mario across the island, along with a question presumably directed to the video game player: 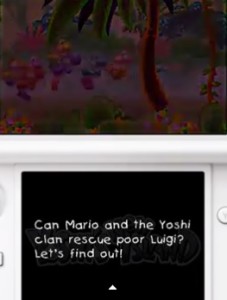 Yes they can.  Otherwise there wouldn’t be much of a game, unless Nintendo/Arzest have decided that Mario’s destined to die horribly and the series ends here, with the game being unbeatable on purpose.  I doubt this highly.

So that’s the Yoshi’s New Island intro. It’s pretty good for the most part, and it even respects the original game’s intro song to at least somewhat of a degree (before mauling the music by having Yoshis ‘sing’ it for the last ten seconds).  Makes me more optimistic about this title anyway.

What do you think of the game’s intro?