It’s… interesting, I guess I’ll give them that.  But as NiNTENDOMiNATi0N’s video shows, it’s most certainly not up to the standard set by the original Yoshi’s Island, with a plot twist that can be best summed up as ‘randomness happens and things get worse’.  So what’s it actually like?  What do I think of this boss battle?  Find out in the full article!

First up, let’s start with the video:

It’s pretty long, but that’s only because the battle seems to have a tendency to stop and start at all the weirdest possible moments.  And in case, you couldn’t watch it, here’s a summary:

You enter a hallway with Kamek attacking you, which seems like a frame by frame remake of the same section in Yoshi’s Island 1.

In Baby Bowser’s room, Kamek is beaten up by Baby Bowser, in exactly the same way as in Yoshi’s Island.

You fight Baby Bowser, who acts kind of like a cross between his fights in the first game and the DS title.

Then you have Giant Baby Bowser, who fights… like a very poor rip off of his self in the original game’s final battle.

You fight HIM in a completely different room, at normal size

And finally, you fight Giant Adult Bowser, in a way that seems like Yoshi’s Island DS.

Didn’t get all that? They basically took the first game, remade its finale, then shoved the finale of Yoshi’s Island DS on the end of that, at the point where you’re supposed to save the Stork.

It’s… not that great to be honest.  The giant sections still don’t live up to the one in a game that’s more than 20 years old now, which is kind of pathetic (why not make Bowser charge the platform any more?  Did basic 3D/mode 7 style stuff suddenly go out of fashion in non DKC platformers?), the normal Bowser bit seems like a bit of a cop out, as if Arzest couldn’t stand the idea of Baby Bowser being the final boss, and the way he’s introduced was just so lazy… 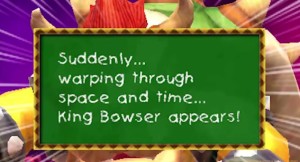 Yes, that’s all he gets.  Apparently, Bowser’s a random encounter now.  Might as well play the Pokemon battle intro theme at this point:

So all in all… I’m not sure about this final fight.  Just seems a bit like a lazy cop out assembled from a bunch of other game’s final boss battles rather than an original effort of its own.

But what do you think?  Fan of this final fight or not?

I was pretty disappointed in this game. I bought it last night and I already beat it. The level designs are super simple and they use pretty much the same music throughout the game. And Mario’s crying is the worse thing ever. I was not a fan of the 3 hit bosses. It just made them too simply.

Please tell me you’re kidding with the ‘bosses die in three hits’. Please?

Cause if that’s true, that’s kind of pathetic for a Yoshi game. And I thought the revelation that Kamek was the boss in every fortress was bad enough.

No, I am not joking. All of the bosses you just have to hit them three times with an egg and you win. It’s super easy. Baby Bowser is three hits until he turns into a giant and then its another three hits. The same goes for Bowser.

The Kemek battles are pretty dull. Each battle isn’t that much different than the last There is only one unique battle against him.

Don’t give away! Your brother must be spared the apparent horror!

Even after I told him all this, he still wanted to try it. There is only so much an older sister can do to protect her brother from bad games. He’ll probably love it, he really enjoys platformers.