Right in the intro too, since upon starting up the game you apparently get a screen asking whether you want to ‘share gameplay data with Nintendo’ to ‘improve future games’.

Is that a good thing?  A bad thing?  Find out my thoughts on this (as well as what the screen actually looks like) in the full article!

First up, here’s the screen mentioned: 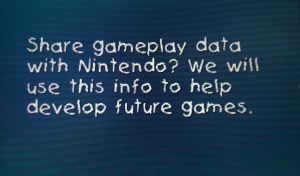 That’s… kind of neat I guess.  But I do have to worry about what it’s actually used for.  I mean, do other people seriously want to give a large company even more insight into their gaming habits?   I don’t know, something seems a bit worrying about that for me.

Still, I do have one piece of feedback for Ninty in regards to this issue.  So in the same style as Yoshi’s Island, here’s my one way to improve the series: 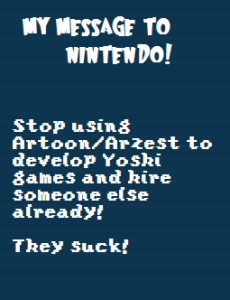 Above: Heck, get someone like me to do it.  I bet I could probably do a better job at game design than these guys.

Is that really such a difficult thing to do?  Hire someone like say, Nintendo EAD or Retro Studios or Next Level Games or Monster Games or the likes to make a new Yoshi’s Island game and to build it properly? Cause Artoon (and their successors) are basically the equivelent of a dodgy builder/contractor company that completely screws up the job and doesn’t know what the hell they’re supposed to be doing.

But what do you think about this?  Are you sending data to Nintendo?