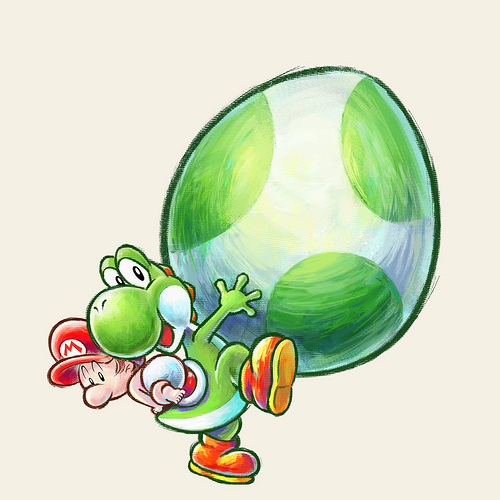 And given that this by the developers of Yoshi’s Island DS, a game which had some of the most unremarkable music in Nintendo history (just the castle theme from that game should bring back bad memories), that’s kind of surprising.  So do you want to hear the worst possible (non ROM hack) music known to man? Well step inside then, because it’s absolutely embarassing how god awful some of these songs are…

That’s the title music.  The first ever impression a new player gets of this brand new ‘Yoshi’s Island’ game!  Oh my god it’s awful.  Seriously, it sounds like a bunch of amateurs just smacking random musical instruments and hoping sound comes out.  Or more accurately, a lot like Nintendo’s terrible E3 demo for Wii Music, where Miyamoto and a bunch of other guys absolutely mangled the Super Mario Bros theme tune:

Makes me picture a bunch of Arzest employees on a stage trying to blurt out the Yoshi’s Island theme in Wii Music while waggling Wii remotes like crazy!

But wait, it gets worse!  How about hearing a bunch of Yoshis ‘sing’ the Yoshi’s Island song?

That can’t be that bad, right?  I mean, New Super Mario Bros U’s Yoshi songs weren’t utterly unhearable, right?  How bad can it possibly be?

Oh god no.  If you can picture the last nail being driven into the coffin of a great game (or more accurately, everyone’s beloved memories of Yoshi’s Island 1), this is it. The theme as sung by a bunch of pre school kids who somehow got let into a recording studio at Nintendo.

It continues with a cave theme that’s got to be the least interesting thing since Joke’s End in Superstar Saga:

Which makes me want to have a little ‘game’.  Out of these two extremely annoying and repetitive songs, which one would make you lose the will to live first?

Someone should mix them, stick on ’em in the background when in work/school/college and see how long it takes before people start getting irritated by the music.

Either way, anyone who even remotely hoped that Yoshi’s New Island wouldn’t screw up in the music department can be pretty much be said to be wrong now.  Cause they absolutely and utterly murdered the soundtrack of the first Yoshi’s Island in the worst way possible.  Thank you Arzest, thank you for completely failing at composing decent music.

Ah well, at least they didn’t mess up the castle theme quite as badly as last time:

why do those first three tracks sound like a baboon mating ritual.

You know what’s really really surprising about this? The founder of Artoon, and the current Executive Vice President of Arzest, is Naoto Oshima. What did he do? He only CREATED Sonic the Hedgehog, and Dr. Eggman. Yeah, the creators of one of the most popular characters in video games… founded Artoon? Who composed the music for Yoshi’s Island DS? Yutaka Minobe and Masayoshi Ishi… Haha MasaYOSHI? Who composed the music for Yoshi’s New Island? Only Masayoshi Ishi. Now with music this bad… what other games have either of these composers composed for? Apparently, Yutaka Minobe has composed for games such… Read more »

Much better than the music in Yoshi’s New Island.

I actually like the music from Warioland Shake it and especially Kirby’s Epic Yarn music. Phew! At least my faith is revived but, now I’m hoping the game doesn’t turn out too easy like Kirby’sEY. I just hate it when I breeze through a game.

Well, Wario Land Shake It had a fair amount of difficulty. In the boss battles and challenges anyway.

Yeah I’ve always loved the Wario Land games. Sometimes I go and replay some of my favorites like Wario World and the nice challenge Wario Land 4 provides. Maybe one day we’ll get a new Wario Land for the Wii U (crossing fingers).

Haha they are pretty bad

You put the cave music twice btw. I actually liked the Wii Music demo, sure there were a few mess ups here & there but it was good. Why don’t you put some of the best songs from Yoshi’s New Island on here too?

Wii Music was awful. YNI sounds awful. Sounds like if I get YNI, I’ll play it with the volume off. Never did that with a game before EVER.

The music sounds good to me. I guess its all about your opinion of what makes good music.

Thanks for listening Beethoven.

I like most of the music in the game; you definitely posted the worst tracks, which aren’t even heard that often. That is NOT the cave them by the way. It’s the one that plays in those tiny rooms through green pipes. The actual cave theme is worlds better.

I actually love the music in this game, in fact only found this article by looking into the game’s music even further. It’s a shame you feel that way, as I personally think the music fits the world perfectly. The use of kazoos works well with the theme of looking after a child, them being quite a child like and easy instrument to play… but not only that, but adds the quirkiness Yoshi games are suppose to hold, mixing the nicer and calmer elements into it too. (Also child like) Maybe I just looked way too into it, but as… Read more »

Sorry but the DS one had a terrible soundtrack too! At least the 3DS one is only slightly better. The DS one had terrible fortress and castle music. I didn’t even sound like a fort or castle, more like a museum.