What More Video Games Need is a Sense of Humour 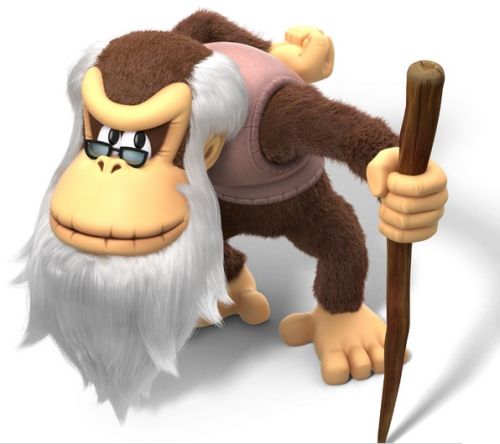 When it comes to modern video games and the industry in general, it seems being ‘serious’ is all the rage.  Whether it’s from two bit indie games trying to deconstruct gaming in some overly mean spirited way in their attempt to be ‘art’, triple A blockbusters desperately trying to turn games into Hollywood movies or development in general becoming something run by people who apparently don’t like games or anyone who actually plays them, video games seem to have become an increasing formal, boring medium.

So here’s my article on why video games really need more humour.  On why they need their own individual charm and to stop taking themselves so seriously.  Keep reading to hear some examples of games that managed this well…

Like the Wario series.  A niche Nintendo franchise split in both Wario Land 2D platformers and WarioWare microgame collections, one of the very best things about the whole series is how it deliberately doesn’t take itself seriously in the slightest. What do I mean by that?  Well for one thing, the treasure descriptions in the last few games seem to be written in a way that’s parodying the heck out of all kinds of gaming and real world cliches, like the following:

Some believe that simply donning this spangly outfit will transform you into a famous movie star! Others think such things require actual talent.

Sure, it sounds fancy. But it’s just a plant. A boring old potted plant. Slap anyone who tries to tell you otherwise.

It may look like a nice little bear carving, but it’s actually a malevolent alien robot sent to spy on your every move. Don’t turn around.

An amazing handheld game unit with FIFTY screens! When unfolded, it takes up as much space as a timeshare condo.

Hotter than any normal hot sauce. No, hotter than that. Hotter. Keep going…

This one shines brighter than any other star out there. Show-off.

Come on, just look at the thing! That is one mysterious pot!

Message in a Bottle

“Send help! I’m trapped in a bottle factory! Right next door to the fortune-cookie place!”

This lamp issues a thick smoke when rubbed. That’s all it does. What were you expecting?

And that continues through every little aspect of the game, Wario Land, WarioWare or otherwise.  The manuals are written in first person with such distractions as join the dots puzzles, sticker books and snarky comments from the characters in their descriptions. 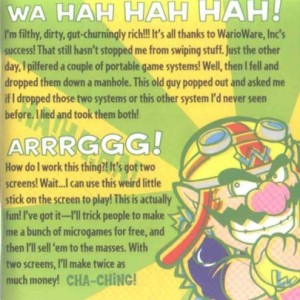 The characters in WarioWare actually laugh at you when you mess up.

And these clips just beggars belief, but are kind of ridiculously amusing anyway:

Above: Screw your ‘true art’, dancing cats and dogs are where it’s at!

And Game & Wario?  Well, the game may not have been too hot, but the ad was at least amusing:

Above: Just give me your money, so I can make my dreams come true!

But it’s not the only series I think does this whole ‘not taking itself too seriously’ thing right.  Oh no, there’s another one too, namely the Donkey Kong Country series.  Why?  Well, thank this guy: 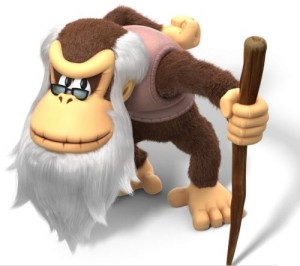 Yep, if there’s one thing that really always lightens my day when playing the games in the series (or just reading the manuals), it’s Cranky Kong acting like a grumpy old man and going on about how terrible the latest games are and how much better things were in his day. 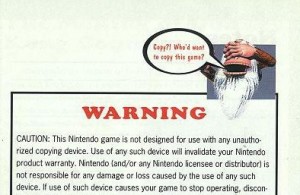 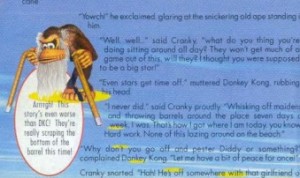 So let’s see what nonsense they’ve made up for this game shall we?

Hmm… well, I have to hand it to them.  This time they’ve managed to come up with a decent storyline that doesn’t involve the usual golden bananas.  Only joking kids!  This one’s worse than all the previous efforts put together! I know you probably aren’t expecting a best seller, but wait till you hear this load of rubbish…

Troff’s a pig, Scoff’s a hippo, and both are big, slow and useless.

Sheesh, you must be a real lame player if you’re still reading this booklet.  You obviously need all the help you can get!

It’s true I’m afraid. They’ve gone and included one of those awful multiplayer modes that seem to be all the fashion these days.  This means you and some other whippersnappers can huddle round your flickering screen and play a few games that I reckon were thrown in at the last minute and will be average at best.

You’ll find a hulking structure that’s a bit dim and doesn’t work.  Yes, I know you already know about Chunky, but this is also true of an eerie lighthouse.

It’s a castle and it’s creepy. Will that do?

Hey, perhaps there is a glimmer of hope for these bums after all.

You’re only reading this because you’re bored!

Don’t be surprised if none of these places actually exist!  I know what these manual writers are like.

Oh dear! Call that tin can a boss? Surely K.ROOL can come up with better than that, maybe a bucket or perhaps a really nasty fridge!

Which reminds me, Rare used to do a brilliant job with the old light heartedness and humour and overall mockery.  Just ask anyone who played Banjo Kazooie or its sequel, complete with villain Gruntilda speaking in a barrage of two line rhymes:

Or the quiz game in the sequel:

Heck, Conker’s Bad Fur Day was basically a whole game of comedic moments and parodies of famous movie scenes.  Whether it was him starting out miserable and narrating his story…

Or the ending, in which the game locks up and he works with a programmer to get him out the mess he’s in:

The whole thing was pretty much never taking itself seriously.  And you know what?  The game was better for that.

And the list goes on.  There’s the Mario RPGs, complete with their parodies of gaming fanboys: 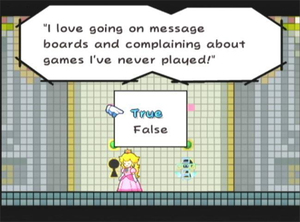 Or Fawful and his constant quest to be ever more of a narcisstic lunatic:

And let’s not forget, Mario & Luigi Dream Team’s own Massif Bros, the next comedy stars in Mario RPG ville: 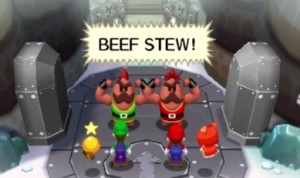 It’s stuff like the games listed above and the moments mentioned we need more of in gaming.  More games that know that they’re not some super serious ‘work of art’ and that are willing to take the mickey out of both themselves and those playing them.

Because when it comes down to it, games really do take themselves too seriously nowadays.  I mean, not every game needs to be some sort of cynics rant about the downfall of civilisation and the ‘evil’ of the average person.  Not every game needs to be some sort of grim dark movie set in some boring, uninteresting ‘realistic’ setting in which every character is a sociopathic asshole that no ones gives a toss about. Games like the Wario series, Donkey Kong series, Mario RPGs and Banjo Kazooie series are great because they’re well, all about being fun.  The characters are amusing, everyone’s willing to laugh at themselves and frankly, the end result has a ton of charm as a result.

Screw gaming’s Citizen Kane, what we really need is gaming’s Monty Python and the Holy Grail.