The Legend of Zelda A Link Between Worlds Uses Japanese Text for Lorule’s Sacred Realm?

Well, that’s an interesting little fact I didn’t know until now.  Apparently, the giant stone tablet present in one of the game’s endings actually uses normal Japanese characters rather than Hylian, hinting at a secret message hidden in the game.  Keep reading to find a picture of this part of the game and some of my thoughts on the matter!

First of all here’s the text in question: 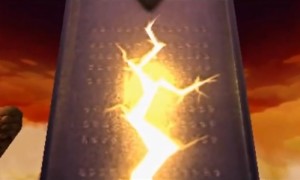 It’s hard to see, but all that text on the cracked stone tablet is actually completely standard Japanese writing done in Katakana!  So it seems like instead of just being a random background detail, that monolith in the ending might actually hold more background story for the game or some other easter egg (as understandable by anyone who can read Japanese)!

Either way, I suspect a lot of interesting secrets could be found if this tablet could be translated into English!  It could have hints at a future Majora’s Mask 3D being released for the system.  It could have more detail about Lorule’s history and how it ties into Hyrule.  Indeed, the possibilities are endless!

dont you mean A Link Between Worlds?

Fixed. How nobody caught this I don’t know, bad proof reading on my part.