The Legend of Zelda A Link Between Worlds; Lorule Announced!

No, that isn’t a joke, Nintendo really have named the Dark World equivalent in this game ‘Lorule’ and come up with another princess character who seems to be a dark counterpart to Zelda.  They’ve also shown a video and give out a ton of other interesting information too, so keep reading to find out what is… 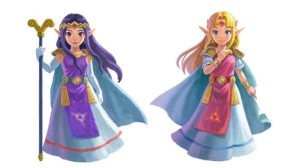 The one on the right is obvious Princess Zelda, the one on the left is this ‘Hilda’ of ‘Lorule’.  Is the new character a ‘Dark World’ doppleganger/equivalent of Zelda?  Most likely, but it’s hard to tell when your only confirmed info about her and the kingdom’s name comes from this Nintendo of America Tweet…

Now we’re taking a look at two characters that inhabit these two worlds, Hilda from Lorule and Zelda from Hyrule. pic.twitter.com/Zgj0poTjLT

There’s also a new trailer for the game.  Here it is:

So what’s interesting in this one?  Well for one thing, it makes it clear that this ‘Hilda’ character has the Dark Triforce thing on the end of her staff and seems to be ‘jealous’ of Princess Zelda, looking at a picture of her on a wall in her castle.  This makes me suspect that her role in the storyline isn’t quite as innocent as we may have been led to believe. 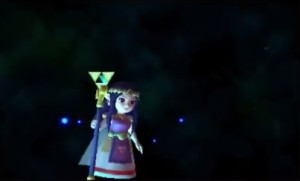 Above: This does not bode well for Link or Zelda. 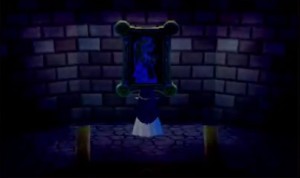 Above: Nor does this.

There’s also some footage of the Ganondorf like Dark Wizard being evil and trapping innocents maidens in paintings. 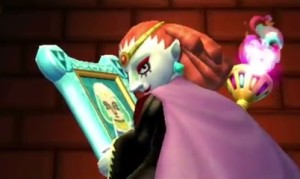 Above: He’s definitely evil.  Creepy as heck too.

Yeah, was this really a surprise to anyone?  Did anyone really not think that someone who looks like this: 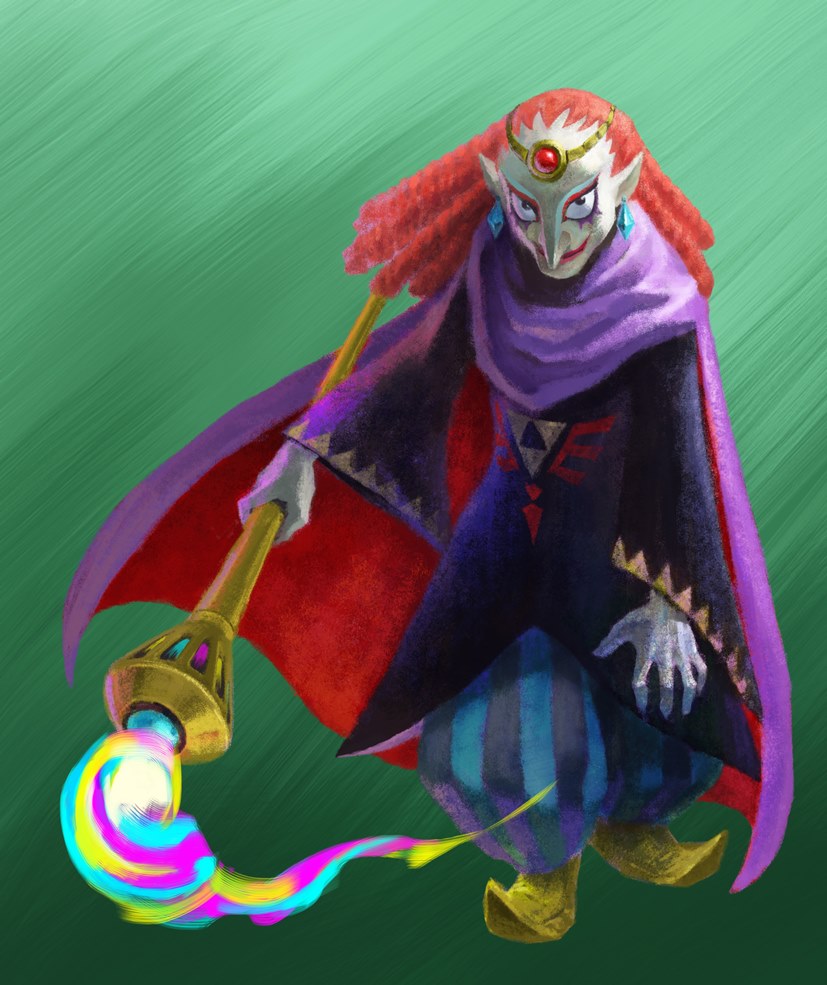 Was not going to be a villain?  He basically looks Ganondorf’s female counterpart, so him being evil was less of a surprise than even that of Chancellor Cole or Ghirahim being such.  Bet he turns out to be yet another reincarnation of Demise.

As per usual though, Link rushes in to save the day!  Oh wait, this guy can become a wall painting too, so Link just smashes head first into a wall and gets knocked out.  Why do I have the feeling this mechanic will play a big part in the boss battles against this guy? 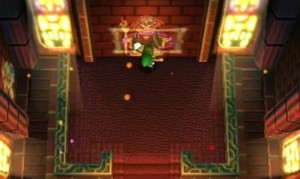 Above: So THAT’s why Link has to become a wall picture now.  Got to give the villains similar powers!

Once the usual ‘villain laughing maniacally’ scene plays out, it’s off to the traditional dungeon exploring and Zelda gameplay.  Or it was, right until the scene cuts back to Zelda (and what I assume is another version of Impa) in Hyrule Castle.  Zelda looks cute as always, although the reason for even including this clip is never really made clear since it’s never actually shows us anything.

We also see Link pulling out the Master Sword in the Sacred Grove.  But wait, what’s that floating in the air?

Yep, it’s what appears to be the ‘pendant’ equivalents of the game.  You know, those things you needed to collect in Link to the Past when exploring the Light World and before you could get the Master Sword and attack Hyrule Castle.  Unfortunately, I see one other worrying thing in their design.

Namely the colours.  Red, blue and green.  Also known as the colours used to represent Forest, Fire and Water elements in the series.  So here’s me betting that the first three dungeons will be a Forest Dungeon in the Lost Woods, a Fire Dungeon on Death Mountain and a Water Dungeon near Lake Hylia.  Kind of like in a lot of other games I can remember… 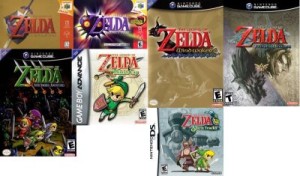 Above: Each of the above has at least three ‘starter’ dungeons based around Forest, Fire and Water themes.

Once that’s done though, it’s on to the demonstration of the wall painting mechanic.  Apparently it’s powered by a gauntlet Link wears on his wrist.  Sort of like the Silver/Golden Gauntlets he could use in Ocarina of Time to toss large boulders and objects around. 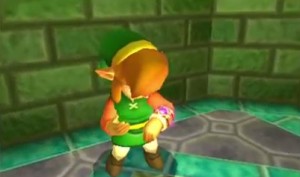 Above: Link’s hands are incredibly fascinating.

Then it’s on to actually showing us how it works!  You see Link walk around in a wall to get to the other side of a dungeon room… 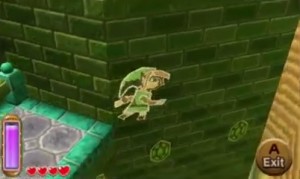 You see Link in painting form ‘ride’ a block upwards to reach higher levels (which illustrates some rather interesting puzzles and gameplay mechanics that can be done with this idea): 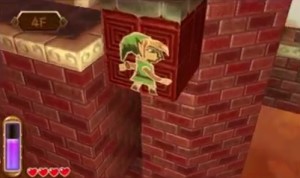 Heck, you even see him come out behind a grate on the wall and smash it over, using it as a bridge to cross gaps!  Wow, Nintendo sure did find some clever ways to use this painting mechanic didn’t they?  Most devs would have just left it as a ‘get round the room and avoids pits’ idea, but not Nintendo!

Above:  An actually quite clever little puzzle, especially in a modern Zelda game.

Another interesting part of the trailer comes next, with Link smashing through the evil wizard’s ‘paint barrier’ over Hyrule Castle with the Master Sword.  This looks ridiculously pretty, with a veritable rainbow of different colours on screen at once.  It also reminds me a bit of the forcefields Ganon used in Ocarina of Time and The Wind Waker. 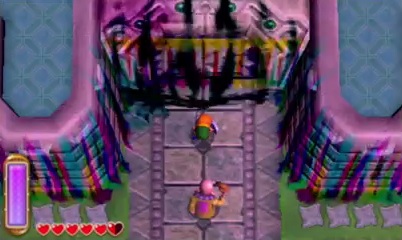 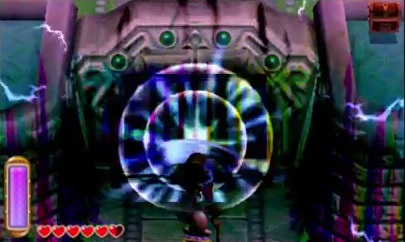 What follows next is some footage showing the villain and Princess Zelda in painting form.  Because as we all know, the ‘designated kidnappee’ can’t go a whole game without being subjected to a fate worse than death, right?

And what do you know?  The villain runs off like a coward while clutching Zelda’s painting.  I’m sure you can see where this is going, right? 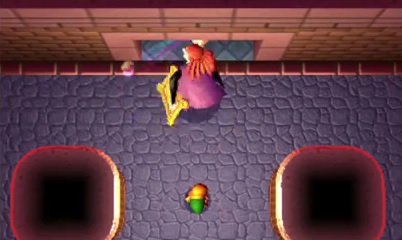 Above: Don’t tell me, he escapes into Lorule? 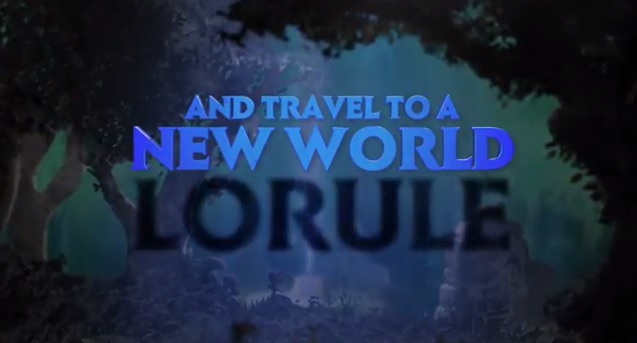 Above: Oh look, what did I tell you?  Media is predictable like that.

Link pursues this evil wizard thing into a crack in the wall, leading to a portal to Lorule.  You can make your own Doctor Who season 5 comparisons here, because you can bet other people will.  No one forgets about Link though… 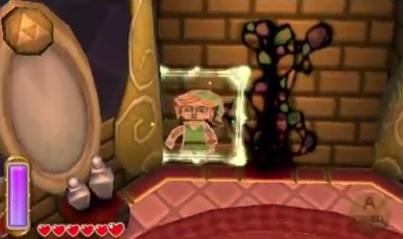 Above: That’s a pretty damn dull crack in the wall leading to a magic world, isn’t it? 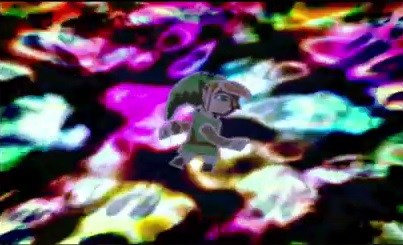 Above: The portal more than makes up for it though.  Trippy!

Once Link’s magic portal time wacky trip is over, our hero ends up in the alternate universe equivalent of where he started.  I never got that to be honest.  Why don’t villains make their portals lead to the edge of a cliff or something to throw off those pursuing them?  I mean, they can usually fly, Link can’t.  Do the maths.

Lorule turns out to be a dark and foreboding place however.  Storms are a brewing outside the castle windows, the bridge gets lit up in bright purple colours for whatever reason and flashes of lightning can be seen all around.  Which makes sense given that it’s basically the new Dark World. 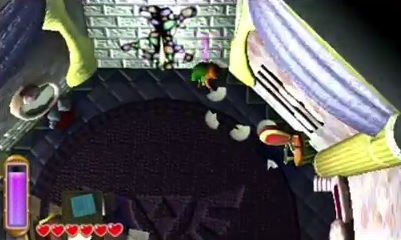 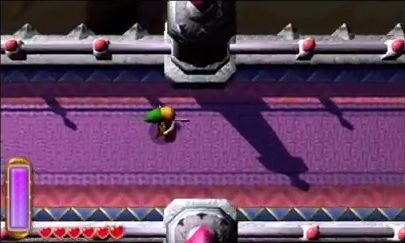 We also get to see Link up close.  This doesn’t look so good… 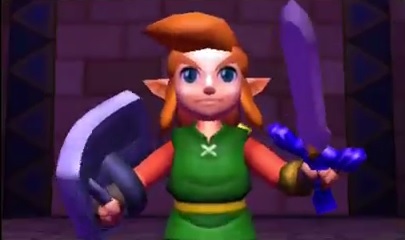 Above: Something is not right about this face…

He has the right to be surprised though.  Some… thing is ominously lurking in front of him.  Yeah, this looks like something bad doesn’t it? 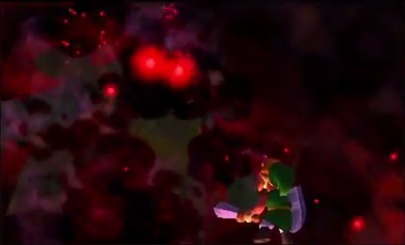 Above: I don’t know why, but I suspect Ganon might have something to do with this.

And cue title screen logo and stuff!  Well, that’s over with, time to move on with the article I guess… 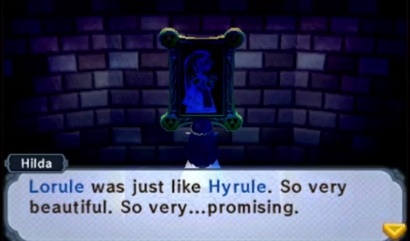 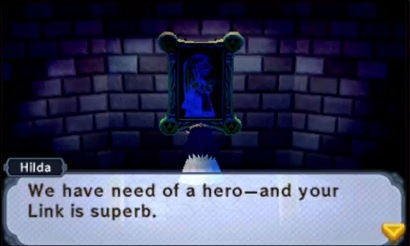 So that’s the new trailer.  It shows off quite a few cool things about the game and hints at a fair amount of storyline, while leaving other things to be found out much later on.  Why does Lorule need a Link?  What is this Ganon like figure’s evil plan?  Why is Lorule a complete wreck of a kingdom?  We’ll have to wait and see!

Smaller dungeons that house treasure can be found as well as standard dungeons.

Here’s hoping they also have bosses too.

And that’s all for today. An awesome new trailer, lots of new characters and story info… I have to say this game is shaping up to be far better than I expected it to be. So who else is going to buy it the minute it goes on sale?