The Legend of Zelda A Link Between Worlds; New Footage from Nintendo Direct!

With the game coming out in just under a month’s time, it should have been no surprise to anyone that The Legend of Zelda A Link Between Worlds got some fairly decent coverage in today’s Nintendo Direct (especially given how it’s the only big 3DS release between now and the end of the year in Europe).  So read on to see the trailers and videos Nintendo released of it during this event, as well as my trailer ‘analysis’ and comments!

What can we see here?  Well, let’s have a watch shall we?

The first thing the presentation mentions are some characters in the game, with the first one shown being Irene the Witch.  Designed sort of like Maple from the Oracle series games, she also acts as a sort of teleport system for Link, letting him quickly traverse the two worlds via her flying broomstick.  Sounds kind of handy, especially given how travel between Hyrule and Lorule might be a bit of a pain otherwise.

After Irene, we see another new NPC in the game call Seres.  A mysterious young Maiden, she’s pretty quickly captured by the evil Yuga and imprisoned in a painting (not surprising given her heritage as the sanctuary priest’s daughter).  Here’s a picture of her, in case you missed it: 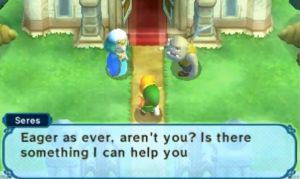 It’s not a new character next though, but an item.  Remember the Zora’s Flippers from A Link to the Past?  Well they’re back here, and serve the same purpose in allowing Link to swim. 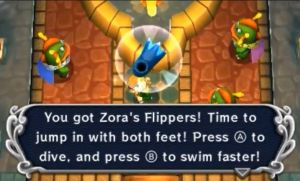 However, while this is a nice callback and all, I do have to wonder; why even have an item to swim anyway?  This is a 21st century video game, and most video game protagonists now should at least have some semblance of swimming ability.  Isn’t the whole concept of an item being needed to swim a bit too old fashioned?

The Milk Bar returns too, which is… a tad unexpected.  It’s even got its own version of Mr Barten, the guy from Majora’s Mask who acts as Talon’s alternate universe equivalent: 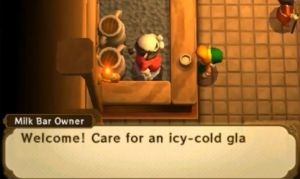 This though is merely a lead in to a meeting with an old man called Gramps, who apparently discusses the Shadow Link StreetPass system.  Wait, what?

Turns out his role in this game as a boss got a tad more complicated.

You see, you can set up a StreetPass ‘bounty’ type system by choosing how much rupees your Link has, what items he’s carrying and various other things, and send him to other players.  He then appears in Hyrule as a Dark Link boss they can then fight to win the stuff you put on the line.  It’s kind of hard to explain or even understand to be honest.

As for how to fight Dark/Shadow Link yourself?

Well, you hunt him down in Hyrule after StreetPassing someone: 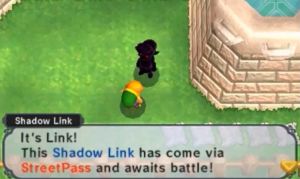 Then you take him on in a dangerous boss battle in a sky arena to win the treasure he holds.  So in other words, the more people you StreetPass, the more battles with Dark Link you get to have. 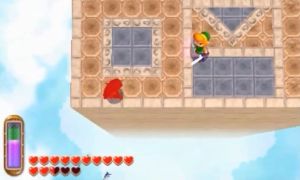 It’s a clever idea (mixing a beloved boss character from the series with a 3DS hardware promoting StreetPass system), but personally, I’m not sure if it’s gonna work too well in most regions. I mean, Zelda games are popular, but they’re not the most mainstream titles on the planet, so the chances of meeting people with said game in their 3DS when out and about are kind of low.  Add how StreetPass is basically a useless feature in about three quarters of the world or more, and I do sometimes think it would have been better if SpotPass was also integrated into this.

That way, it could send data to those on your friends list once a day, and give those people who need to rely on message forums to get 3DS friends some way to actually make use of this feature.

And after that, cue a brand new trailer for the game!  Oh goodness, looks like my analysis ‘job’ is about to take even longer…

Oh look, it turns out that weird kid from the artwork is somehow related to/friends with Link and wakes him up at the start of the game. 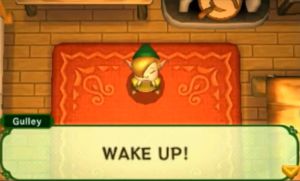 Seriously?  A random kid shouts at the top of his voice and wakes Link up at the start of the game?  If I was ever in a situation like that, I’d tell said kid to clear off and shut up, since yelling ‘WAKE UP!’ to someone at the top of your voice doesn’t exactly endear you to them…

And then it’s off to adventure!  We fight Tektites in Hyrule!

Buzz Blobs in the Lost Woods!

See Ravio in his shop, renting the bow along the way!

Which just happens to be free for the first time.  Very generous I guess?  Oh wait.  Guy needs to save the world and you usually charge him rental fees… that’s not exactly fair.

Oh well, back to beating up random monsters!  Like shooting this Moblin with the bow:

Oh wait, scratch that, no monster killing.  Just item showcasing, like with that weird propeller stick thing from the earlier videos.

We do get to see some Hinox’s get set on fire though, so I guess that’s something.  Yay for more enemy killing!

There’s a scene with Irene giving Link a lift to somewhere else on the map, and then one with some old sage guy getting trapped in a painting by Yuga.  Gee, what is it with Nintendo and people getting trapped in paintings anyway?

Above: Link Betwen Worlds is the fourth time this has happened in a Nintendo game.

But more interestingly, this also leads into the explanation of how Link actually gets his painting powers anyway.

How does it work?

Answer?  He gets attacked by Yuga, who then attempts to imprison him in a painting like everyone else.  The Triforce of Courage kicks in though, so it gives him the power to escape and then become a painting again at will. 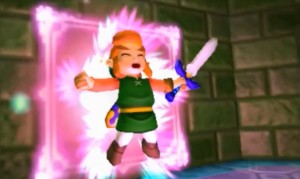 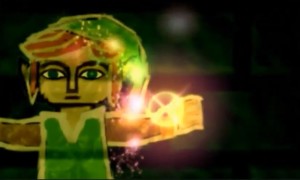 This really makes me want to see a crossover between Luigi’s Mansion Dark Moon and the Legend of Zelda A Link Between Worlds now.  Just to see him the humour of King Boo attempting to trap Link in a portrait and his shock when the Triforce lets Link escape and gain painting powers, and the equally ridiculous situation of Luigi freeing all of Yuga’s victims with the Dark Light Device.  It would be glorious.

Either way, cue a montage of ‘clever’ puzzles involving Link becoming a painting and moving across walls.

This is then followed by dungeon footage.  Like this mysterious place, inhabited by ridiculously oversized bird like monsters: 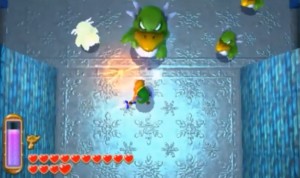 The sand dungeon, with sand level puzzles and giant Deku Babas, which seem to grow surprisingly well in a place with no mositure or nutrients whatsoever.  Yeah, plants in a desert.  Really? 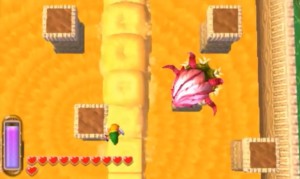 And then?  Everything’s favourite creepy Zelda enemy returns.  No, not Redeads.  The other scary as hell monster that everyone fears… 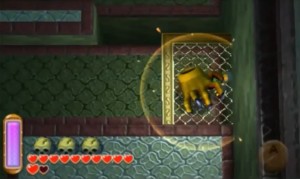 Wallmasters!  Nice to see them back I guess, even if it does mean a lot more unintentional trips back to dungeon entrances.

We also get to see Link take on some Gibdos, marking the (kind of expected but still nice) return of the mummy monsters to the franchise. 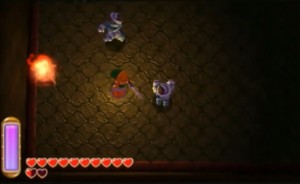 A Dodongo like thing appears too.  So I guess it’s a new boss in that it’s not from Link to the Past, but it might as well be an old boss given that it looks an awful lot like either Dodongo or King Dodongo and likely has a similar weakness.  Or maybe not, there’s also a gem on its back.  Can’t forget that! 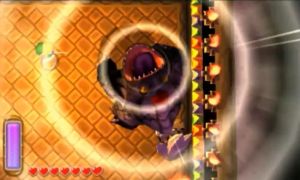 Still, the Dodongo here can turn into a creepy shadow with glowing yellow eyes and charge at Link at high speed around the room, so I guess he really has taken a few levels in badass since the days of Ocarina of Time and such like. 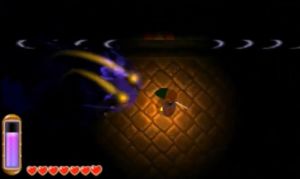 After this, it’s a quick revisit of some already seen footage, before… well, guess who shows up… 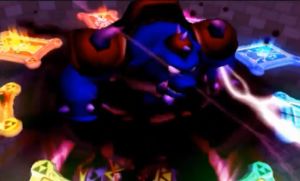 Yeah, turns out Ganon does get revived after all.  Not that this should surprise absolutely anyone, the guy’s been hijacking the storylines of Zelda games and upstaging new baddies ever since theSNES era, with him magically turning out to be the Big Bad in not only Link to the Past and The Wind Waker, but also Four Swords Adventures, Twilight Princess and the Oracle games.  There’s even a trope named for him!

Heck, I was even sort of expecting him to take over Four Swords, the Minish Cap and Skyward Sword too, but those somewhat thankfully didn’t have it occur.  Even after the Anniversary Edition of the former gave Nintendo the perfect chance to slot him in many years after the game’s initial release.

Either way, guess we can add ‘Link Between Worlds’ to the ever growing list of Zelda games that Ganon has magically shown up in to become the final boss.

And so the trailer draws to a close.  We get another neat 3D animation of the Triforce pieces rotating and forming together… 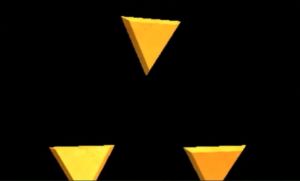 The game gets an official announce date of November 22nd.

And eventually, proof also comes along that the Zelda 3DS bundle will be released on the same day as well! 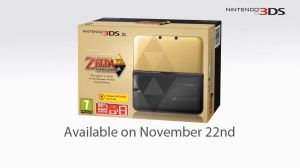 So that’s it, the entire trailer/presentation from today’s Nintendo Direct and all that it gives away about about The Legend of Zelda A Link Between Worlds.  It looks pretty impressive I must say, and I think the whole thing looks like a game that will be an unforgettable classic come November 22nd.

What do you think about what we now know about this game from today’s presentation?