No, the title is not a lie.  Thought the old media were over this whole ‘video games are evil’ thing and learnt to do actual research when discussing them?  Well apparently this isn’t the case, since this new Guardian article is just plain ridiculous in how badly researched and thought out it is.  Here’s the address (not linked to avoid helping their search engine rankings):

So let’s see where this whole thing falls apart.  First of all, we’ve got a ridiculously misleading claim, namely that:

Except take one look at what types of games the Guardian chart lists alongside the likes of Call of Duty and Battlefield as ‘violent’ games: 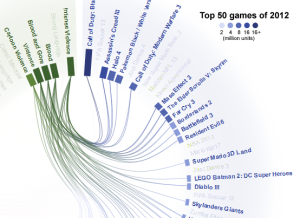 The Guardian’s ‘violent game’ choices are questionable at best.

I’m sorry, but what?  When the hell was Super Mario 3D Land ever seen as a violent game?  In fact, I’ll check the box right now:

Above: Totally a violent video game.

Okay then. Similarly, from what I can tell, the likes of Pokemon Black and White 2 got the same age rating too.  Can’t see any content warnings here either.  Maybe I should check the PEGI site…

Nope, don’t see much here (then again, the site doesn’t seem to be responding at all where I am, which is probably kind of ironic in a sense).  So off the bat it seems this article is using misleading or false data to back up a misleading headline.

And even if ‘comic mischief’ or ‘cartoon violence’ is mentioned, this is obviously no reason to list a game as violent.  They do say if it’s excluded over half are still considered ‘violent’, but from what I can tell it seems like this clearly wouldn’t be the case.

For that alone, it seems like they’re presenting this data in a deliberate misleading way to draw in visitors, counting things that aren’t even taken seriously by their data source (the ESRB itself) and throwing them in with games with actual violent content to inflate statistics.

Above: Pokemon Black and White 2 violent?  When did The Guardian side with PETA?

The suggested audience thing is kind of hilarious too, if only because it pretty much says that ‘mature’ games don’t actually make up that large a portion of the market.  Yet they don’t mention this data at all, completely trying to ignore how more than 60% of all best selling games in 2012 were rated Teen or under.

Above: The title implies many best selling video games are violent, include guns, etc.  Or that most do. 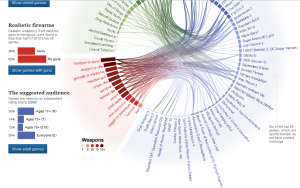 The very stats however show a different story.   Only about 50% of top selling games are ‘violent’, most are not M rated and most don’t have guns.

What the headline implies and what the (extremely misleading) stats point out do not correlate in any real fashion. It’s pretty much tabloid style writing for hits rather than analysising the facts in a fair and unbiased manner. It’s also a terrible article in that only a paragraph and video actually has anything remotely like an opinion being stated, with no real ‘analysis’ of the data whatsoever.

Bad reporting all round I say.

Yes, Mario has CARTOON violence which renders it a violent game when you look at it. What they forgot to mention is that there is a HUGE difference between CoD: BO2 and Super Mario 3d Land.