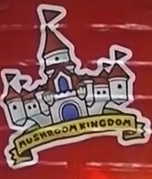 It’s just under a month to go until E3, and hence new footage of this game is right around the corner. But if you can’t wait for Super Mario Odyssey, it seems you’ve now got some new footage to tide you over. Yes, straight from a Tokyo Big Sight show in January, this previously ignored video of the game gives a few more glimpses at additional content in Mario’s next major adventure.

Here’s the video itself:

As you can tell, there’s not much here. About 30 seconds of footage showing the desert and New Donk City, and that’s pretty much the end of it. Yet don’t think there aren’t any details to find! Because oh no, there are tons of little extras that Nintendo has give us a glimpse of here!

Like this interesting little sprite stenciled on the side of a skyscraper. Looks a bit like Tanooki Mario if you ask us (though the quality isn’t good enough to check).

Or this sneakily hidden Purple Coin beneath the tank enemy. Ah, looks like those missions from Super Mario Galaxy may be making a comeback! 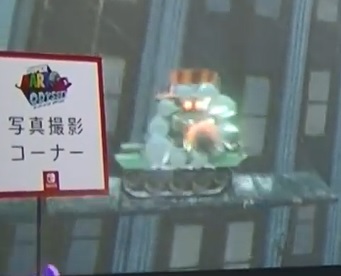 As for the light beam here… well it certainly looks suspicious. Kind of like your final destination after a long climb up the building. 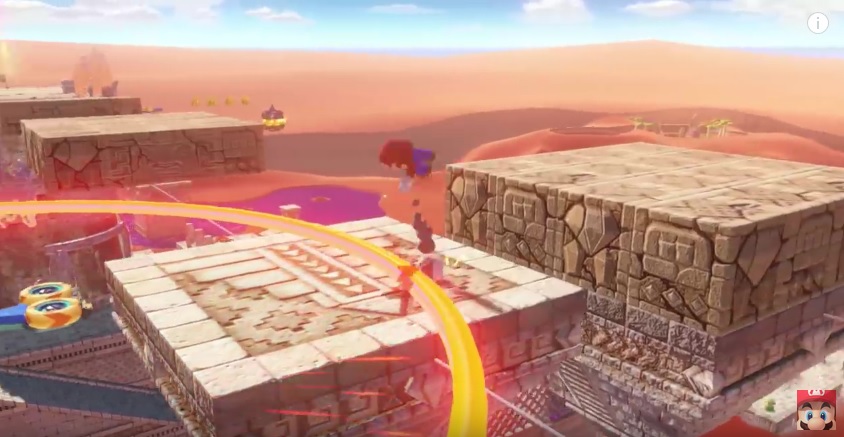 But hey, onto the desert now. This area… gives a few more hints towards the game’s structure. Why? Well look at that suspicious trail of coins a minute. The fact it’s leading down to a door gives me the impression the separate star missions idea is making a comeback here. I mean okay, it was pretty obvious before. And Nintendo did say this was a more open Mario game. 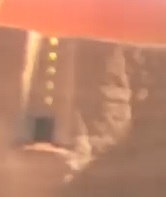 However, with stuff like this (and the skipping mini game in New Donk City), I get the impression that no other design can really explain things. Why else would you explore these giant worlds if you’re not collecting shines or collectables?

There is no other reason.

Back to the location touring now, since we get a glimpse of where this area may be in relation to others. Where’s that?

Well, look at this area from the Nintendo Switch preview trailer:

That seems a lot like the floating islands and objects up there, doesn’t it? So yeah, I’m guessing that the floating islands is one ‘star’, the upside down pyramid is another ‘star’, the cliffside area is a third, the town has a fourth or fifth and that one other area here has a boss fight. Probably the castle area shown in the first ever preview of the game: 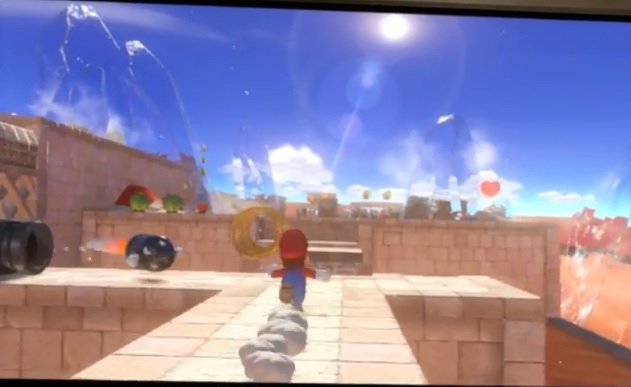 And that wraps up the tour of the actual game footage. But wait, that’s not all we see here. Oh no, we also see the event location itself. Complete with a copy of Mario’s ship from the game:

Which itself gives us a few hints. For instance, the Peach’s Castle picture on the side? That likely says it’ll appear in the game in some form. Probably in the intro cutscene or something.

Meanwhile, while the camera is desperately trying to pan upwards, you can also see a few more details in the game world too. Like this odd structure to the right: 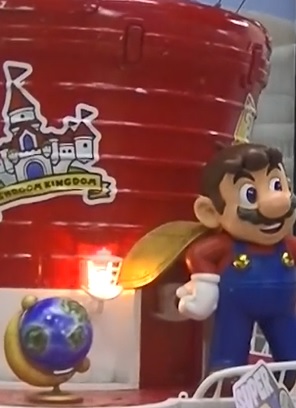 It looks like some large cement blocks stacked up on top of one another. Maybe a castle wall or small house of some nature? Eh, maybe not. It’s really hard to tell with how shaky this camera footage is (who cares what the ceiling looks like?)

Still, it’s better than nothing I guess. We at least know that purple coins return now, and that Nintendo still likes putting Mario sprites and artwork on walls as easter eggs. So that’s something to keep everyone distracted a bit until E3 rolls around.

But what do you think? Did you see any neat details in this new Super Mario Odyssey footage?