Is that a good thing?  Hard to really say given the much better reception Super Mario Galaxy got compared to 3D Land.  Either way, Super Mario 3D Land has apparently outpaced Super Mario Galaxy in terms of sales and gone well past the eight million mark in recent weeks.  Here’s a chart comparing how well each game is selling: 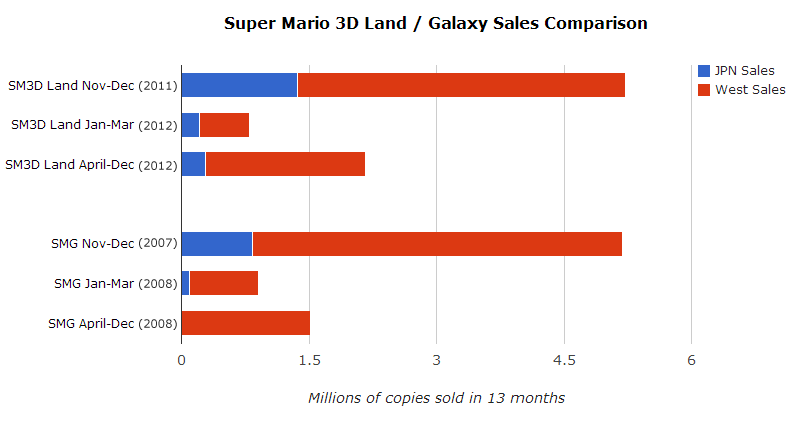 As you can clearly see, Super Mario 3D Land seems to be selling for longer periods of time after the initial burst of popularity back on launch day, and is significantly more popular in Japan than Super Mario Galaxy was.  There’s still time to go before 3D Land stops selling well (it’s been in the charts for quite a while), but it seems like the game will eventually outsell Galaxy by quite the margin (putting it only second to Super Mario 64 in terms of most popular 3D Mario title).

Perhaps Japanese gamers just seem to like or be more tolerant of super linear gameplay compared to those over in Western countries?  I mean, I’ve heard quite a few theories about this based on the lack of a frontier and Wild West in Japan or the culture being more focused on following the crowd than the likes of US culture, but you have to admit that more linear games do seem to do quite a bit better over there than they do in other regions.

But what do you think?  Are you impressed that Super Mario 3D Land has done better than Galaxy as far as sales go?  Or are you a bit surprised that the game with the generally worse reviews and critical reception is the one that seems to be more of a long term hit?