Whether you like it or not, the ‘super guide’ concept (where terrible video game players can use some in game system to get invincibility in or plain skip difficult levels after messing up too much) is becoming rather prevalent in modern games.  But now, in a move which is at the very least a bit questionable, Sega is going one step further.

They’re actually adding one to a classic video game.  As in, the 3D Classics version of Ecco the Dolphin has a Super Guide whereas the original didn’t.

Yes, you heard that right.  The 3D Classics version has a new ‘Super Dolphin’ mode which gives you invincibility and unlimited oxygen underwater.  Just like the White Tanooki Suit in Mario 3D Land and New Super Mario Bros 2!  Here’s a picture: 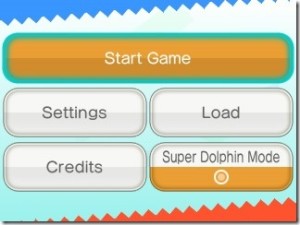 Personally, I’m not sure about this idea.  I mean, Super Guides in new games seems fair enough, but editing 10-20 year old classics to add them?  Come on, what next?  We’ll see the Cosmic Guide feature added to Mario 64 and Sunshine?  Zelda 2 with hint ghosts, hint movies and Fi?  Super Mario World with ‘instant level skip P Wings’?  It just seems like it might be ‘ruining’ old games, and it gives the awkward impression that today’s gamers are just not good enough to beat them without all this ‘help’.

I mean, remember what Cranky Kong said in the Donkey Kong 64 manual?

Tough luck kid.  I’ve been told to keep my mouth shut, as they want to keep all the good stuff for a money making strategy guide.  I’m sure some of it will appear on that newfangled ‘internet’ thing as well, so I suggest you take a look-see there.  You could also ask your friends, assuming of course you’ve got any.  If all else fails, you’ll just have to play better.

Isn’t that how games are meant to work?  You suck, you fail at them.  You try again, get better.  Eventually, you beat the level/area and move on.

Why did that change?  When did gamers decide they needed a magic wand to wave to instantly complete the level?  Thanks Sega.  At least Nintendo kept stuff like this in new games rather than trying to rewrite history to do so (and no, Luigi in Mario 64 DS doesn’t count here).

But what do you think about Sega adding a Super Guide to a classic video game for its 3DS rerelease?

Ah, to be entitled to winning. Shame.

I agree with your article, unless your playing battle toads, thats the only exception.