So what is this special Mario Kart 7/Mario 3D Land content anyway?

In a part of the Nintendo Direct that many people may not have noticed (because only Nintendo of America covered this in their presentation at all), there’s talk of ‘exclusive content for Mario Kart 7 and Mario 3D Land’ coming soon to the 3DS.  Yes, DLC/content for games that’s been out nearly two years.

Here’s a picture from the presentation showing this: 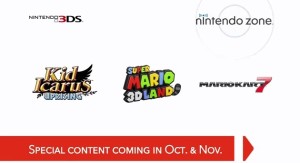 You can hear the guy on the American Nintendo Direct presentation discuss this ‘exclusive Nintendo Zone content’ for these games at about 22 and a half minutes into this video:

But something still strikes me as odd about this.  Namely, the big question of what exactly this ‘exclusive’ content will even be.

I mean, it makes sense for Animal Crossing New Leaf, where you can just give away special furniture or in game items.  It makes a tiny bit of sense for Kid Icarus Uprising, which had some complex weapon system I can’t remember the full details of.

But Super Mario 3D Land and Mario Kart 7?  What the hell could you give away there?

Above: Does this thing even have DLC potential?

It can’t be extra options or downloadable content in the ‘new characters or levels’ sense, that would take a significant amount more effort than Nintendo would likely to be willing to put in for these titles.  It’s probably not a security patch or bug fix (because those wouldn’t be exclusive Nintendo Zone content and would be advertised via the eShop).  So what is it?

Indeed, all I can really imagine being possible to ‘give away’ would be either time trial records or those Mario 3D Land mystery boxes, neither of which are something that’d really appeal to anyone any more.

But hey, what do you think?  What is this ‘exclusive Nintendo Zone’ content for Super Mario 3D Land and Mario Kart 7 anyway?

I think you missed my point a bit. It’s not that there’s no DLC potential in terms of new content they could add, it’s just I’m not sure whether any of these games are programmed to receive it.